Some readers may remember last semester when I put in my two cents about the compilation album, “Songs That Saved My Life.” In that article, I gave almost irrational praise to a band called Dance Gavin Dance, who were featured on the album.

Well, gosh darn it, I’m back to do it again, because this band still has me riled up.

Dance Gavin Dance (DGD) has existed in various forms since 2005. The band has undergone several member changes, including three different clean vocalists. (In fact, lead guitarist Will Swan and drummer Matt Mingus are the only members of the group to have been in the band consistently since the beginning. Unclean vocalist Jon Mess has been with the band through most of its existence).

DGD’s life can be split into three “eras” based loosely on the clean vocalist present in the band at the time: the Jonny Craig era, the Kurt Travis era and the Tilian Pearson era. While the style of the band has not changed much since its conception, each vocalist has certainly left their own individual marks on the band.

In an effort to give each vocalist his minute to shine, I’m going to provide some of my favorite jams with Craig as the main vocalist, then Travis, and then Pearson, along with an analysis of what makes them so good.

Craig’s emotionally-charged clean vocals are displayed in sharp contrast to the unconventional screamed lyrics of Jon Mess, which end the song on a violent and graphic note, in typical Jon Mess fashion.

Aside from DGD, Craig was the clean vocalist for Emarosa for some time, a member of short-lived super-group Isles and Glaciers and a solo act and the lead vocalist for Slaves, which recently removed him from the band due to problems surrounding his relapsing addiction.

I wish him all the best in his recovery efforts. He holds so much potential that I believe has yet to be fully tapped into.

“Uneasy Hearts Weigh the Most”

“Uneasy Hearts” was my introduction to DGD more than five years ago. Travis’ vocal power was not the first thing that caught my attention about the song, but rather the constant switching between musical styles and attitudes: a chorus sung by the whole band, screams of “your b**** is dead / she was hit by a truck / what the f***,” and a heartfelt melodic realization that “holy s***, she smells like heaven / Been best friends since we were 11 / And, oh my god, I like her.”

Of all three of the DGD clean vocalists, Travis is the one who slipped into the band the most quietly, and while his vocals are not the most spectacular, his sound and his style made him a seamless fit.

Something magical about DGD, a band that has such a convoluted history of members, is that songs from one vocalists era can be sung by one or both of the other vocalists without sounding awkward. During the band’s 10-year anniversary tour, all three singers came on stage to perform “Uneasy Hearts” together.

“Death of a Strawberry”

This is the finale in a four-song series spanning from the Kurt Travis era to Tilian Pearson, all with titles relating to “strawberry swishers.” Even though the focus of this segment is a song with Pearson’s vocals, it’s the culmination of a series started by Travis, so I’ll be including it in the Travis era.

I’ve listened to this absolute rollercoaster of a series more times than I can count, and I still couldn’t tell you what a strawberry swisher is, or what it has to do with the lyrical content. The series details a short-lived relationship without much reciprocation of feelings. “Death of a Strawberry” seems to be describing the point where the partner with lingering feelings is still imagining what their relationship could have been had it worked out, but acknowledging that it ended for a reason.

Pearson suggests “just for the day we’ll pretend I’m made of money / I’ll be your sugar daddy / Hey! / Let’s make a fool of ourselves and crash a party / Act like we own the place,” seeming to be in a similar mindset to prior songs in the series; but then later Mess metaphorically slaps him in the face with “we all need partners for the pain of existence / My bedroom chemistry set ended up on your Pinterest / Fledging allegiance to a few common interests,” giving an odd reminder that the girl these clean vocalists have been pining over for four songs is gone for good.

Yet there is not one mention of strawberry swishers ever. I’d love to be in the studio with these guys when they’re naming these songs.

If you don’t feel like listening to the whole song, just listen to the section from 3:10 to 3:35 as proof that screaming, clean vocals and funky riffs can all mix. There’s something oddly magical about Mess’ rhythm while screaming “since my head is now my belly, I need big brain snacks” against Pearson’s contrasting gentle back-up vocals.

Mess screaming and Pearson singing the same lyrics simultaneously during a Will Swan guitar riff is the sensory overload we didn’t know we needed.

“Am I the reason that you can’t look past your future self? / Got me believing you’ve been stuck and glued in frequent doubt / I know the feeling ‘cause I can’t keep my mind open now,” they say in unison, creating a vibe that is half poetry slam and half rap battle. It seems like coffee shop poetry slams and rap battles would go together like hand sanitizer and an invisible paper cut, but it’s DGD, so it’s essentially the peanut butter and jelly of music.

In conclusion, while the debate about who the “best” DGD clean vocalist is will probably never end, one thing can be agreed upon. We as mortal beings do not deserve Dance Gavin Dance. 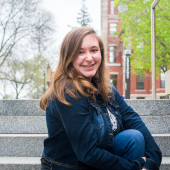 DJ Harry takes on the world

The Undergraduate Prize Plays: One night. Three performances. All the feels.