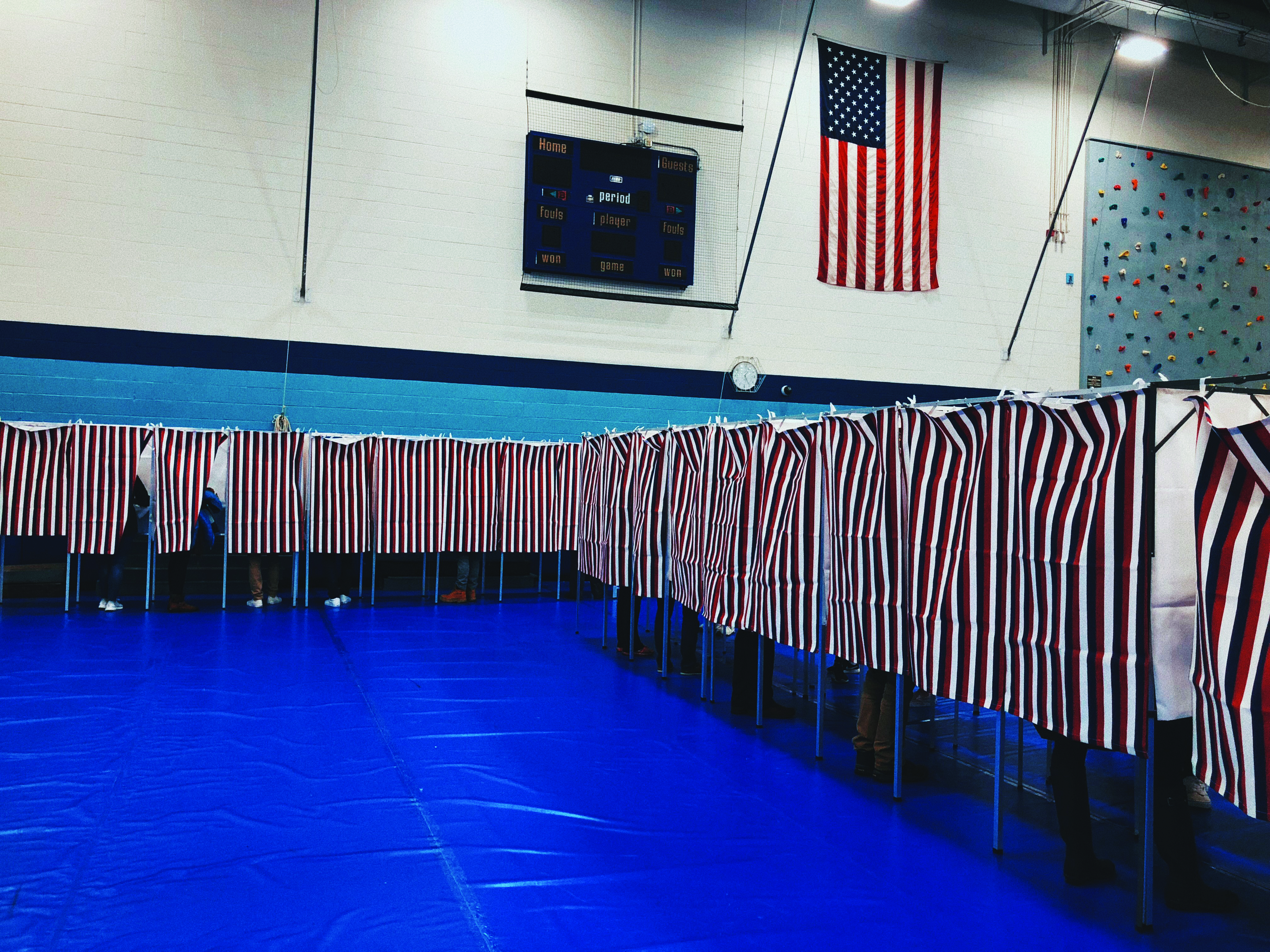 Quincy Abramson, a University of New Hampshire senior studying Italian and International Affairs, spent much of this Tuesday standing in the rain, encouraging students to vote and helping them find their way to the polls. One of the issues that Abramson believes is most important for voters to consider is climate change.

Scientific research demonstrates that carbon dioxide emissions from the burning of fossil fuels is a leading contributor to global warming, and warming air and oceans are projected to cause rising seas, strengthening storms, deepening drought, and more.

“The more studies and research that come out, the worse it seems,” Abramson said. “I absolutely want to vote for politicians who believe scientists and understand that it’s in our hands to ensure that our kids and grandkids have a safe place to live.”

Although she didn’t feel that “there’s a candidate that’s specifically championing [climate change] in New Hampshire’s election this year,” she entered the polls to vote herself on Tuesday with climate change in mind.

“The clock’s ticking, every year that passes it becomes more and more important,” she said.

But Abramson and other young people concerned about the threats of climate change face a tough political reality: Although college students tend to be more accepting of and passionate about issues related to climate change, the age group also votes the least, compared to older voters, according to Lawrence Hamilton, a Professor of Sociology at UNH and a senior fellow at the Carsey School of Public Policy.

“The most environmentally critical action, by far, is voting for political leaders who listen to scientists and take environmental, including climate, concerns seriously. In terms of voting, young adults as a group unfortunately lag behind older Americans,” Hamilton said.

Hamilton pointed to a poll last month that asked New Hampshire voters of different ages about their interest in Tuesday’s midterm election.

“Respondents 65 and over were more than twice as likely to indicate high interest, hence high likelihood of voting,” Hamilton said. “So older people who are less concerned about climate change exert much more influence on policy.”

Yet the urgency of the situation is only increasing. In October, a committee of scientists organized by the United Nations announced that global warming appears to be happening more quickly than previously thought, and that impacts may be more severe. The report highlighted the importance of limiting global warming to 1.5 degrees Celsius and the need to cut carbon emissions as fast as possible to do that.

“Every extra bit of warming matters, especially since warming of 1.5ºC or higher increases the risk associated with long-lasting or irreversible changes, such as the loss of some ecosystems,” Hans-Otto Pörtner, Co-Chair of the IPCC working group, said in a press release issued with the report.
Madalena Medeiros, a first-year student at UNH and Theatre Major, made two trips to the polls on election day – once to vote, and once to offer moral support to a friend. She said that climate change is one of the most important issues that she considers when voting.

“In the future, the earth may not exist anymore because we’re destroying it slowly every day,” said Medeiros. “I would like to see politicians take into account the amount of trash that we’re creating every day. And then also how much carbon we emit when we make things, and just take a look at our footprint that we’re leaving.”

Others say the long-term fate of the natural world, and humans’ place upon it, doesn’t factor into voting decisions. Mandy Scully, a sophomore Sport Studies and Communication double major, said she only voted because she wants lower college tuition.

“I just don’t think about climate change. I really don’t pay attention to it,” she said. “I honestly don’t know much about it to fully vote on it.”

The choice for voters choosing candidates this year was illustrated by the positions taken in the governor’s race, which pitted Republican incumbent Chris Sununu against Democrat Molly Kelly. Sununu has said he is not convinced that humans are the cause of global warming, telling listeners to a New Hampshire Public Radio program, “Is carbon the leading reason why the earth has warmed up pretty much continuously over the last 150 years, I’m not sure.”

Kelly championed investment in renewable non-carbon energy sources, such as solar and wind, as key to keeping global warming under control.

Hannah Machado, president of College Democrats at UNH, said that part of the reason she aligns herself with the Democratic Party is because its candidates accept climate change and propose policies to address it.

“The denial of science from the right is extremely disheartening as the planet is dying before our very eyes and yet it is still a partisan issue,” Machado said. “There have been numerous initiatives taken from candidates on the left toward implementing greener policies. … I never thought that the survival of our planet would be a partisan issue but am saddened to say that’s the reality.”

Hayden Harrington, a sophomore Political Science and Justice Studies dual major and a member of College Republicans at UNH, said that he believes that younger generations tend to “believe” in climate change based on the education they receive.

“It’s sort of ingrained into our education,” he said. Harrington believes that there’s a large difference between the type of education younger generations receive compared to their parents.

“I’ve never thought you could dispute science,” he said.

He doesn’t feel the actions of the Trump administration, which has promoted fossil fuel extraction and production, removed limits on methane emissions, and dismissed the Paris Climate Accord, accurately represents all Republican views. Harrington wants to encourage the discussion of climate change amongst Republicans at UNH and plans to start taking small steps to interweave it more into the agenda.

Historically, climate change is not a top issue in election polls, according Andrew Smith Associate Professor of Political Science and Director of the UNH Survey Center.

“We have not asked specifically about that in New Hampshire during this cycle,” Smith said. “We have asked ‘What is the most important problem facing the state of New Hampshire?’ as an open-ended question for years. Climate Change or environmental issues in general, have never made it over five percent.”

Hamilton said that targeted peer-to-peer efforts, such as the people who stand out and remind others to vote and drive people to the polls, do get more young adults, including UNH students, to vote. He encouraged young adults, including those at UNH, to vote for whatever issues that matter to them in order to shape the future of their country.

“[If] you don’t vote, the people who do vote are going to eat your lunch, and in this case, it means eating your future. It’s not just that they will skew policy in their favor,” he said. “If younger adults voted at the same rate as over 65-year-olds, this would be a different country and a different path.”

The New Hampshire Youth Movement (NHYM), a political organization active on the UNH campus, focuses on issues affecting young people. NHYM social media coordinator Sumner Bright said climate change is part of NHYM’s “list of major big issues” that the group encourages students and other young people to act on. She said NHYM has knocked on doors every day to get out the vote. When NHYM members canvas around the UNH campus, they have to educate student voters on a range of issues.

NHYM endorsed Kelly for governor over Sununu in part because of their different views on climate change and renewable energy, Bright said. Turning Point USA at UNH, a student chapter of a national organization advocating limited government, did not respond to interview requests for this article.

Dante Scala, Professor of Political Science at UNH, said generating solutions for climate change is extremely difficult when political parties are so divided on the subject.

“We’ve become so partisan on so many things. I think it’s tougher for science itself to be regarded as objective since science is infected or is viewed through these partisan lenses,” Scala said. “Voters don’t tend to be single-issue voters when it comes to the environment the way that National Rifle Association members tend to be single-issue when it comes to gun rights.”

On Tuesday afternoon, Haley Dunning, a UNH English Major, sat on a couch in an empty and calm section of the Memorial Union Building commuter lounge, wearing a “Republicans Won’t Stop Me. My Voice. My Vote.” sticker on her chest. She described climate change as a main factor in her voting.
“My mother works at UNITIL, an energy provider in the area, and she has been thinking about energy,” she said. “She’s always talked to me about it, and I’ve taken a couple of classes as well.”
Dunning would like to see elected officials take more steps to prepare for the impacts of a changing climate.
“We can’t really reverse things like rising sea levels, but we need to adapt,” she said. “We need to find more renewable energy sources, and limit our fossil fuels or we’re screwed.”

Students march for divestment at UNH