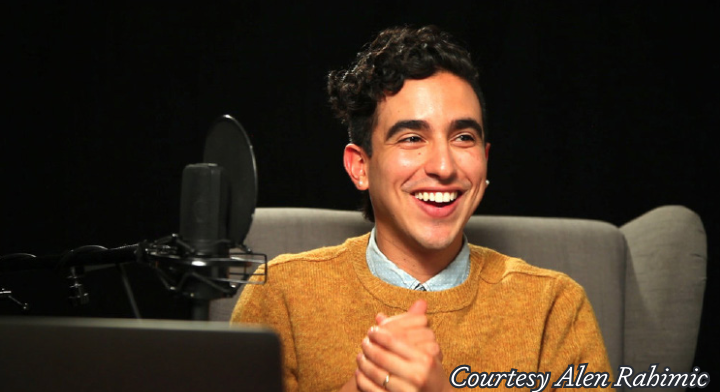 On Wednesday in the Strafford Room at the Memorial Union Building, digital content creator Dylan Marron delivered an inspiring discourse on social issues, creative process and handling disagreements.
Marron has become well-known for numerous projects in recent years, most notably his YouTube series “Unboxing,” which takes intangible concepts like transphobia or privilege and explains them through the process of “unboxing.” His podcast “Conversations with People Who Hate Me,” which served as a base for Wednesday’s talk, features Marron reaching out to the people behind hateful messages for meaningful conversations. Many audience members expressed familiarity with his work through his role of Carlos in a fictional podcast “Welcome to Night Vale.”
Students Jordan Shefferman and Ian Stromski were familiar with Marron’s work prior to attending the event.
“We are both interested in social issues,” Stromski, a first-year business major, said. “We watch [Marron] on YouTube and we’re excited to see him here.”
“I’m excited to hear him talk about the current events and social issues that I care about,” Shefferman, a first-year sociology major, said.
During his talk, Marron gave an overview of his work and introduced the audience to a variety of social issues of diversity. He started by sharing a heartfelt childhood story of how he was denied a role in a film due to racial bias, then moved on to showing several videos from his “Every Single Word” YouTube series in which he edits upsettingly short videos from big screen films, only leaving in the lines spoken by people of color.
Marron proceeded to discuss “Unboxing,” and focused the rest of the talk on “Conversations with People Who Hate Me,” presenting outtakes from the podcast to demonstrate the ways to handle a conversation with someone holding an opposite point of view.
“I’ve made many things on the Internet, and I like working on the Internet, and I value it as a form of communication,” Marron said. “I don’t believe that the Internet is this inherently awful place, but I hope we can find ways to use it as a tool to connect with each other.”
Marron was brought in by Alliance, an LGBTQIAP+ organization on campus, as part of UNH LGBTQA Coming Out Week. The event was cosponsored by the Memorial Union & Student Activities, the Bill Kidder Fund and Residential Life. As an openly gay man with experience in social issues, Marron shared many important points relevant to the community. He also dedicated a significant amount of time to answering both personal and broader questions at the end of his talk, giving valuable pieces of advice to the audience members.
“Dylan Marron is a perfect example of a social activist who is doing good work, also focusing on our community, since he holds an identity in our community,” Tova Langels, a co-chair of the Alliance, said. “He is also very good about talking about identities that don’t specifically apply to him.”
“He is a very real person in all of the content that he makes,” Alliance program coordinator Lillian Gilbert added. “He seems like someone you can have a real conversation with, and for an actual lecture like this that’s a really appealing quality.”