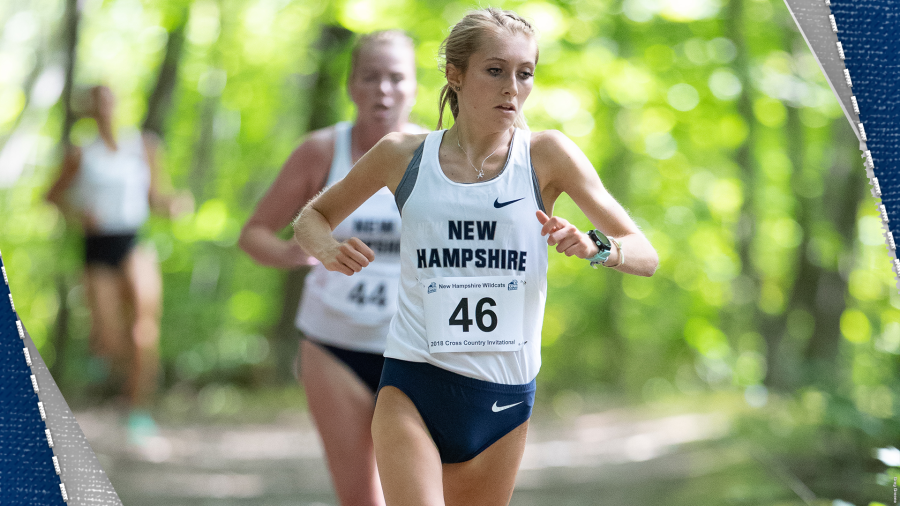 Caroline Mahoney led the Wildcats in the Paul Short Run.

Written by Michael Mawson, Sports Editor.
Both the men’s and women’s cross country teams traveled down to Bethlehem, Pa. to take part in the 45th annual Paul Short Run hosted by Lehigh University on Sept. 29, the largest intercollegiate cross country meet in the nation.
The men finished 34th as a team out of 41 competing universities, while the UNH women placed 29th out of 41. The women are currently ranked #11 in the northeast region, which is the highest out of any America East school.
The star of the Wildcats on the women’s side was sophomore Caroline Mahoney, who was competing in her first career collegiate 6K. She finished with a time of 21:44, which was good for 50th place in a group of 353 participants.
The men were paced by first-year runner Maxwell Ireland. Ireland placed 168th out of 360 total runners with a time of 26:07 in the 8K race. That time was a 15 second improvement on his last race at the Coast to Coast Battle, where Ireland finished with a time of 26:22.
Utah State University won the men’s race, with a total of 77 points. For comparison, UNH finished with 953 points with their 34th place finish. Junior Peter Suefer of Virgina Tech placed first overall with a time of 24:11.
Yale University came out on top for the women, totaling 118 points. UNH finished with 699 points. First-year runner Brogan MacDougall of Queen’s University placed first with a time of 20:21.
Other notable performances on the men’s team included senior Dalvis Clark who finished 181st with a time of 26:12 and senior Brett Hoerner who finished 188th with a time of 26:16. Junior Nicolas Sevilla-Connelly was the fourth and final UNH men’s runner to finish in the top 200, sneaking in to 199th place with a total time of 26:21.
For the women, junior Meg Champagne was also able to crack the top 100, finishing 98th with a time of 22:13. Graduate student Riley Gilmore placed 166th with a time of 22:40 and junior Madeline Quigley finished closely behind Gilmore in 187th with a time of 22:53. First year runner Eleonara Olsmats was the only other Wildcat to finish within the top 200, placing 198th with a time of 22:57 in her first collegiate 6K race.
Next up for both the men and women is the New England Championships at Franklin Park in Boston on Oct. 6. This meet marks the beginning of the championship season.