On the Spot with Eddie Edwards 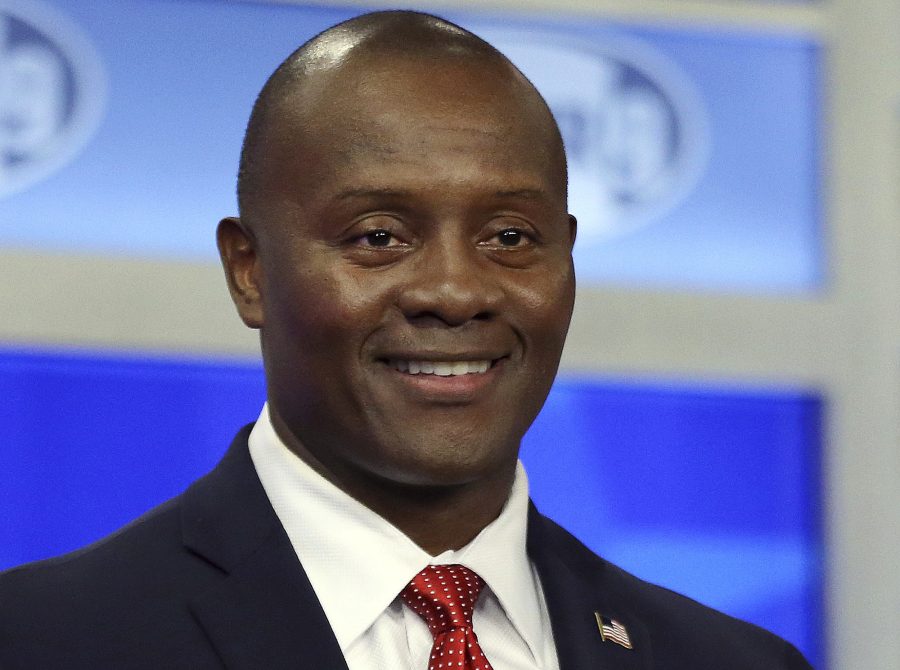 For the good part of a lifetime, Eddie Edwards, a Navy veteran and Republican nominee for New Hampshire’s 1st Congressional District, has believed in a life of service.
“I’ve always believed in service, and I think there’s no greater cause than to give back to your community,” he said in an Oct. 1 WUNH, Durham interview with The New Hampshire’s Jacob Dawson. “And I thought after serving in the military, serving in law enforcement, I thought we need to really focus on the type of men and women we elect to send to Congress.”
His desire to protect and give back to the community is central to his campaign against Democratic nominee Chris Pappas in the upcoming Nov. 6 general election, as Edwards hopes to utilize his long and sundry career – featuring roles ranging from three years as a boatswain’s mate third class (BM3) to eight years as Director of Enforcement and Licensing within in the New Hampshire State Liquor Commission to one year as South Hampton’s Chief of Police – as demonstrations of his long-term commitment toward solving the state’s most looming issues such as healthcare and the opioid crisis.
Edwards’ journey to the Granite State’s 2018 midterms began with his childhood in a poor and “violent” neighborhood within Atlanta, Georgia, where the Dover, N.H. resident bear witness to frequent instances of domestic violence, prostitution and gambling, all of which exposed him to the realities of mental abuse. In the midst of such acts, however, he found solace and inspiration from his grandmother.
“…it was my grandmother who taught me ‘American values,’” he recalled, “those values of learning how to forgive, how to be independent, self-reliant [and] how to pray.”
Over time, Edwards realized that such values were commonly and “deeply” aligned with American conservatism, all while observing the gradual evolution of American politics to its present state; the two realizations together resulted in him calling himself a “conservative outsider.”
Edwards said the label reflects what he sees as national frustration with the current state of affairs in Washington, and a reality in which the average citizen does not spend their whole life in politics, possess substantial wealth, feel they live in places that guarantee them enough opportunities to succeed or live under a government that sufficiently safeguards their rights.
In working to spread his messages, the candidate believes his campaign benefited from being first out of the gate – Edwards first began running in April 2017 – and directly connecting with a variety of voters up and down the state. The candidate said it is an “honor” to meet the voters in their homes or places of employment.
“When you actually get an opportunity to go to someone’s home and they’re gracious enough to allow you to come into their home and sit you at their table and look you in the face and have a face-to-face conversation about issues that are important to them, to me, you take on an enormous responsibility when you say you want to really fight for families and individuals,” he said.


Edwards, as part of his mission to promote public service, touted individual responsibility as a key component of his campaign, one of many arguments leading national debates on topics like gun rights. The candidate expressed support for the Bill of Rights as a whole, stating that he believes the Tenth Amendment especially should motivate states to create environments “where the citizens of those states actually value life, they respect one another, they respect the culture they created” and not leave it for the federal government to deal with.
Edwards also stated his support for the Second Amendment and believes that imposing regulations on gun ownership prevents the creation of a culture of responsibility. He added that people should be held accountable for using firearms in ways that endanger others, especially in light of recent school shootings and concerns from parents and students about their personal safety.
When explaining his stance on combating mounting student debt in the Granite State, Edwards called education “extremely important” and identified excessive student loans as one of the primary culprits of student debt, while adding that colleges have not helped the situation by exaggerating guarantees of long-term high-paying jobs for graduates in the short-term.
The candidate – who earned a bachelor’s degree in Business Administration from Northcentral University – also expressed favor toward alternative methods to the traditional collegiate experience, such as online colleges – highlighting Southern New Hampshire University (SNHU) as an example – stating that they can save costs for students while “achieving the same level of criteria in a three-year period rather than a four-year period for a BA.”
When asked about his connections to Republican leaders, Edwards praised Gov. Chris Sununu for his “directness” and ability to “be a conservative politician and reach people all across the spectrum and reach them where they are,” all the while acknowledging the governor’s political inability to endorse any particular candidate as Republican policies begin to “bear fruit” through, among other metrics, “record” low unemployment.
Edwards said he has also had conversations with President Donald Trump, but did not disclose details about their discussions.
“…whether it’s the governor or whether it’s the president…these folks are doing the very best they can to serve our nation and our state, and they’re doing it in a way that I think is producing results,” he said while reflecting upon the state of Republicans in New Hampshire.
Edwards expresses hope that he can be given another opportunity to serve Granite Staters, but acknowledges that the system is not without its flaws and challenges. One of Edwards’ biggest criticisms of modern American politics is what he perceives as a general sense of dishonesty emanating from career politicians, whose perspectives can potentially “turn off” voters and keep them from getting involved in the process. The candidate also explained his frustration at rehashed and timeworn messages  – crafted by career politicians – on both sides that he feels fail to appeal to urban and rural voters wanting a “spirit of entrepreneurship” and “service through integrity” that can provide them with rising wages, good paying jobs and opportunities to achieve their long-term goals.
In expressing his hopes to provide such opportunities to the public should he be elected, Edwards used baseball to illustrate his life’s journey, message of resilience and the realities of N.H. voters in 2018.
“I understand I came from a dugout,” he said. “I wasn’t fortunate enough to be born on first base, second base or third base. But I was certainly guaranteed a swing at bat like everyone else in this country. And when you get your opportunity at bat, you have to do the very best you can.”
Featured image courtesy of the Boston Herald.
Delete Image
Align Left
Align Center
Align Right
Align Left
Align Center
Delete Heading