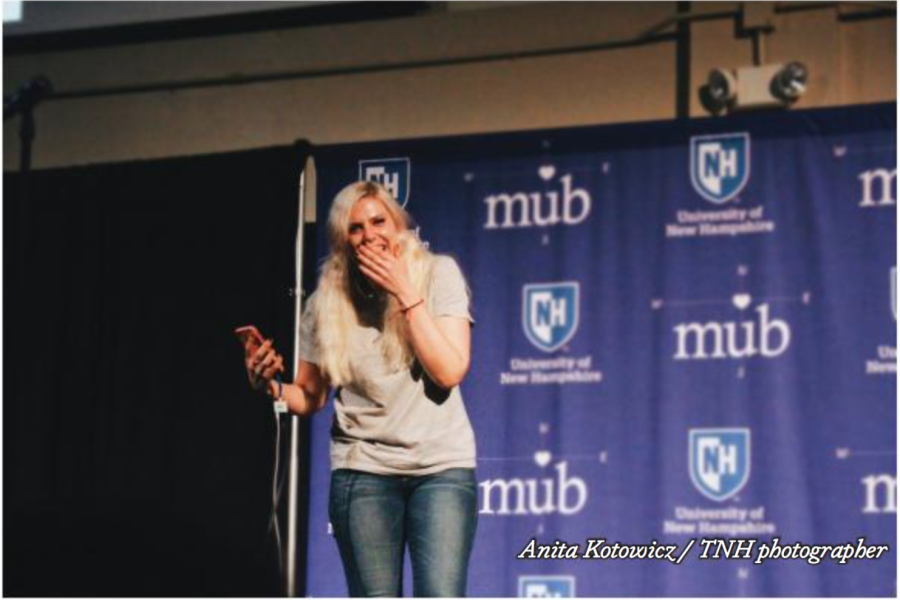 “Tinder Live” and its creator, comedian Lane Moore, capped off September at the University of New Hampshire with a Sept. 28 performance in a jam-packed Granite State Room filled with excitement and shocking plot twists at every swipe.
With a variety of profiles on display from around the Durham area, Moore replicated how a normal user would use the popular app, except that, unlike normal users, she frequently welcomed and encouraged audience participation, especially when it came to choosing who to swipe right and hope to match up with or swipe left and ignore. In those moments, of which there were many, students could be heard loudly voicing their support or disdain for various potential matches.
Moore also played many games with the audience, including “Which One Is It,” where she would ask the crowd to guess which person in a group profile photo was the actual account holder.
When Moore found a match, she would engage in humorous exchanges with them, which were frequently littered with numerous emojis and random GIFs that more often than not had little to do with the actual conversation.
One of the show’s unexpected highlights came from first-year Computer Science major Nathan Cannon, whose profile popped up 42 minutes into the show. After discovering Cannon’s presence in the audience, Moore proceeded to read a poem featured on his profile revealing why he created the account, where he hoped she was “picking up my jive” and declared “I’m with the girl in the pictures/And only here for tinder live.”
The episode resulted in an eruption of cheers and resounding applause as Cannon briefly rose from the crowd to reveal himself and Moore, wiping away tears of joy and amazement, screenshotted the poem.
“I don’t…know how it feels to win a major award, but this is what I assume it feels like,” Moore said.
Cannon expressed similar sentiments after the show, as well as his gratefulness for being featured and adding to the show’s memorability.
“It was really surprising [to be featured] because there were so many people and I didn’t actually expect to get up on the screen,” he said, adding that he thinks shows like Tinder Live are “the best thing that UNH does for its students…I try to go to every single one.”
Other students offered similar praise for the show, including sophomore political science major Delilah DiMambro, who said the show was “so good” and that Moore “presented it really well” while wishing the comedian had spent more time “live-swiping on people that were on the campus.”
“I was kind of hoping she would pick on really douchey guys, too,” first-year environmental conservation major Benjamin Herbert said in describing his feelings on the performance. “But at the same time, I thought it was nice and fun and innocent and stuff; it was still a good time.”
Herbert also commended Cannon’s poem and profile, calling it “the best part.”
Moore told The New Hampshire she had purposefully narrowed the app’s range to increase the chances of discovering audience members, stating that the Cannon episode “worked out so well.”
“…that was, honestly, one of my top three ‘Tinder Live’ moments ever,” she said, “and I’ve been doing this show for four years.”
Moore – whose inspiration for the show arose while using Tinder for the first time and finding no previous live comedy show based on the app -said that UNH is one of her favorite schools to play at, in part due to the success of both last year’s and Friday’s performances. She also attributed the success to the improvised nature of the show and the active and energetic audience participation throughout.
“…There’s no other comedy show that’s like this…I never know what’s going to happen on stage,” Moore said. “It’s a really fun show for me because…it feels like something that’s shared. It’s not like something I’ve prepared and I’m, like, showing them this thing. It’s like we’re all in this super weird thing together.”