Danielle Feinberg, Pixar and the women of computer science 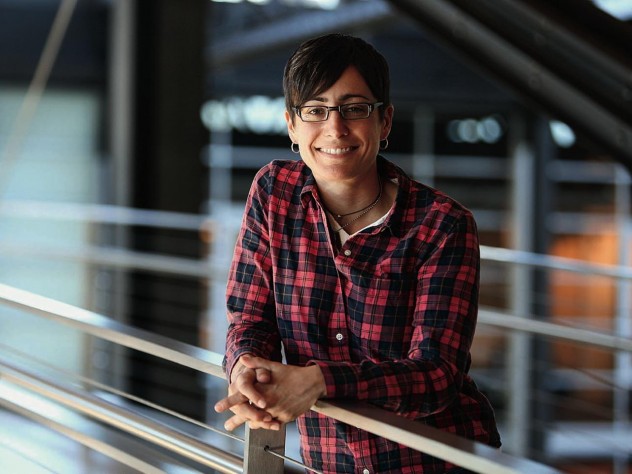 The University of New Hampshire’s Memorial Union Strafford Room presented its audience of students and guests with the dazzling shine of Danielle Feinberg, the director of photography for lighting at Pixar on Wednesday, Oct. 3.
Known for her work on Oscar-winning hits “Finding Nemo,” “Wall-E,” “Brave” and “Coco,” Feinberg introduced UNH to the connections between art and computer science that merge to make computer-generated Pixar films a tangible reality. Along the way, she discussed how she first got interested in coding, what goes into special effects, and the effort put into creating detailed landscapes.
Feinberg grew up in Boulder, Colorado where first discovered her love of art through the helping hands of her parents, whom she refers to as “art people.” The first time art met coding for Feinberg occurred when she came across a Turtle robot, an educational robot operated by Logo programming language. The Turtle’s user inputted simple commands such as “left,” “right” or “forward,” as the robot drew corresponding lines based on the commands.
The seemingly simple Turtle led Feinberg to pursue her interests at Harvard University studying computer science.
At Harvard, Feinberg was one of 10-15 percent of female students in the program, and she recalled that in the male-dominated field of CS, women too often quit; yet Feinberg refused to yield to the pressure; her hard work and perseverance resulted in her working on “A Bug’s Life” after she graduated in 1997.
By the time “WALL-E” came out in 2008, Feinberg was a director of photography and lighting. As her career progressed, she went on to lend her expertise to films like “Monsters, Inc.,” “Cars,” “Ratatouille” and, most recently, “Coco,” which won the award for Best Animated Film at the 90thAcademy Awards.
Feinberg’s talk struck a chord with many of the computer science majors in attendance; Mallory Cashman and Jennifer Nachatelo were among them.
“We are both computer science majors, and I personally want to work for Disney in the future,” Nachatelo said.
“I think it’s really interesting and really encouraging to think like this and say that it is possible to be a CS major,” Cashman added.
Assistant Director of the Memorial Union, Programs, and Leadership Dave Zamansky, who works on bringing people to the Memorial Union Building to give speeches and perform, had much to say concerning Feinberg and the importance of her visit.
“We know people are interested in pop culture, science and also women in that industry,” he said.
Feinberg is currently working on the upcoming Pixar movies “Toy Story 4” and “Trio,” while also giving talks at an abundance of universities and mentoring girls in coding, math and science.
Feinberg reached out to a girls’ math and science camp at Stanford 15 years prior, hoping to teach there over the summer. Although her email was past the application deadline, the camp answered and offered Feinberg three classes to teach that year.
“Of course, I talked about how we make our films and all the math and science behind it, and I could see how excited the kids got about it when they saw how math and science can make movies,” said Feinberg. “I got excited by it, too, and got excited by the idea that I could do some little amount to get girls especially interested and excited about math and science and code. Hopefully someday in computer science classrooms it isn’t 10 percent women – it’s getting better for sure – I’m kinda feeling that if I can do my part then I can help change that.”