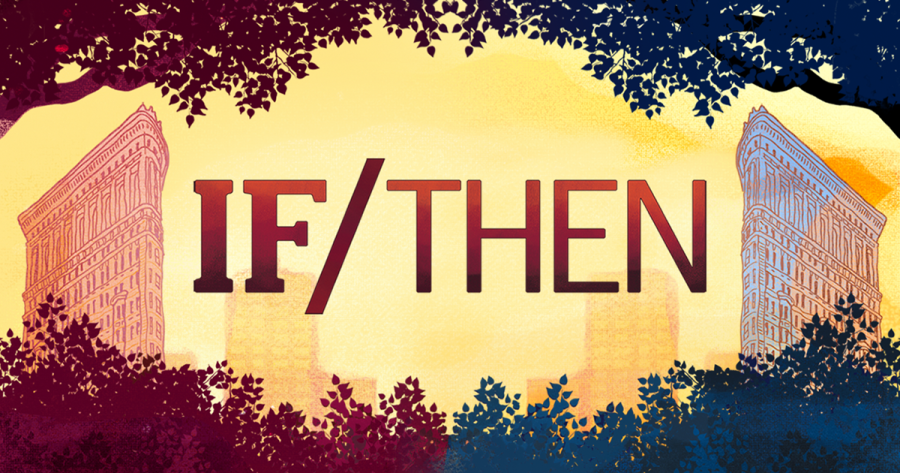 Wednesday night at the Johnson Theater, audience members listened to a question that many students have had during their time in college: “How would my life had played out if I just made one different decision?”
“If/Then,” which opened last Wednesday, tells the story of Elizabeth, a woman who just got out of a divorce and moved back to New York City. The play opens with Elizabeth running into her friends Kate and Lucas, who present her with two different ideas. Kate asks “Liz” if she wants to listen to a guitarist in the park while Lucas wants “Beth” to attend a street action to protest a development being put up in New York City. The play splits at this point and tells how each decision plays out. Liz ends up married with children whereas Beth takes on a job with the city as an urban planner.
Alison McCarron plays Elizabeth and does a fine job in showing the different people that both Liz and Beth become over time due to their differing choices in life. While McCarron’s voice is not as boisterous as some of her co-stars, she delivers her role with an emotional candor that has, thus far, been lacking in other iterations of “If/Then.”Also, her ability to convincingly switch from comedic songs such as “What the F***?” and more serious fare such as “Here I Go” without issue speaks to her excellent abilities. One also must see the show solely on the strength of McCarron’s rendition of “You Learn to Live Without,” a gut-wrenching song about love and loss.
Nicole Sprague plays Kate, Elizabeth’s best female friend, who takes Elizabeth down the path of “Liz” and introduces her to Liz’s future husband, Josh. While Sprague’s character receives less stage time than the other secondary male characters, she makes her mark with memorable instances of comedic relief which include speaking to her kindergarten classroom about the heroism of her friend Beth and singing on the importance of companionship in the song “Love While You Can.”
Zachary Speigel plays Lucas, Elizabeth’s activist friend, who takes Elizabeth down her “Beth” path. At first, Speigel almost overpowers his co-stars, but this well serves someone playing an in-your-face neighborhood activist. As the years wear on, Lucas’s character becomes more complacent and Mr. Speigel is likely the best reminder in the cast that –yes –the play occurs over the span of multiple years. In the Beth path, Lucas still pines for Beth as he did in his college days while, in the Liz path, he finds love with a man, David. To Speigel’s continued credit, he does portray the feeling of rejection rather well in “You Don’t Need to Love Me.”
Matt Soucy plays Josh, the soldier who returned from combat and immediately fell in love with Liz. Soucy’s character. Unfortunately, this feels mostly like a vehicle to move the plot along. This lack of character development happens to be the fault of the playwrights. Even with this obstacle, Soucydoes a fantastic job with the first act’s “Here I Go” and the second act’s “Hey, Kid.” The latter is far more memorable, as Josh discusses the excitements and fears of impending fatherhood.
Nick Hall, Mai Hartwich, Cam Folts and Olivia Fonseca played the roles of Stephen, Anne, David and Elena, respectively. Stephen as the boss of Beth, Anne (the girlfriend and later wife of Kate), David (the boyfriend of Lucas in the “Liz” scenario) and Elena as the assistant of Beth.
Given the already full cast numbers, each of these actors and actresses did not have as much time to present their talents. Yet, when they did get their sliver of the spotlight. they seized it with ease. Fonseca’s several performances of “No More Wasted Time” were entwined with incredible power while driving home the main point of the play: that one should not simply wait for things to happen or wonder how life could have been. Folts’s duet with Speigel in “The Best Worst Mistake You Ever Made” is also one of the most entertaining duets put to stage.
While “If/Then”received mixed reviews when it first came to Broadway, UNH seemed to have considered all possible issues, as they did not appear in the opening performance at the Johnson Theater. New York City is not as unnaturally sanitary as it had been in other productions and the monotony of the music is well covered up by the expressive performances of everyone in the cast. The smaller stage also seems more fitting for the minimalistic style of the play as there is far less unused space. The choreography also feels more engrained and integral to the story than in other productions. At first, the most considerable criticism is that the only visible difference between the “Beth” or “Liz” scenarios is the presence of glasses on McCarron’s face. This issue is solved, however, by getting a seat closer to the stage in the Johnson Theater. This is critical to note for any theatergoers with poor eyesight.
What was a star vehicle for Idina Menzel while on Broadway has become a true ensemble delight akin to that Sondheim’s “Company” under the tutelage of director Deborah Kinghorn, a professor of theater and dance. In sum, the most common critiques of the thin plot and repetitive music of “If/Then” disappear in a college theater setting, where such problems melt away under the performances of a cast who command the stage with nothing short of excellence.