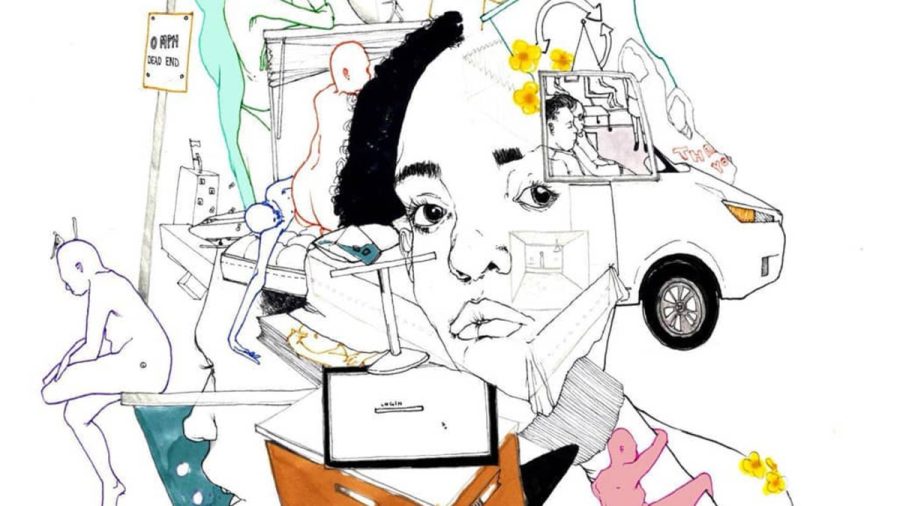 Rap music was born out of spoken word poetry, a recalcitrant little brother to spoken word’s angsty teenager. Where spoken word communicated the stories of the underrepresented and misplaced, rap gave these stories the popularity and the voice they required to reach much larger audiences.
While today’s spoken word exists only in esoteric circles, rap has entered the mainstream. Moreover, there exists a select few artists blurring the lines between the sibling art forms, and few do it better than Noname.
“A lot of my fans… I think they like me because they think I’m the anti-Cardi B. I’m not. I’m just Fatimah,” Noname, born Fatimah Warner, explained to The Fader in a recent profile preluding her debut studio album, “Room 25.” During the in-depth interview, she explained her reclusive habits and recent maturation, all of which paint the canvas of “Room 25” with starkly gorgeous colors.
“Room 25” isn’t an album you’ll hear in a rowdy party environment. Rather, it’s the quiet confessionals of a shy 20-something afraid to confide in just anybody, choosing to do so instead through song.
Noname has a burning penchant for dissecting her most troublesome thoughts with the help of a pen and soothing production primarily consisting of live instrumentation. She terms it “lullaby rap music,” but this may be selling it short. Where lullabies are calming hymns preaching buoyant lies to reassure children, Noname’s music often tells darkly honest stories that leave no stone unturned. While both lullabies and Noname’s take on the genre are sonically sweet, coated with technicolor gummy-bear-visions of happiness, Noname’s whispered introspections strike powerfully despite their lighthearted audio backdrop.
“Don’t Forget About Me” is the quintessential Noname track. As she goes back and forth between deciding whether her music, amongst other things, saves lives, Noname revels in poetic musings on the self and comes to halting existential conclusions: “I know everyone goes someday / I know my body’s fragile, know it’s made from clay / But if I have to go, I pray my soul is still eternal / And my momma don’t forget about me.” It’s these ethereal moments, juggling thoughts of death and remembrance, that establish
Noname as the important uniquity in today’s hip-hop landscape that she is.
https://youtu.be/cVin1y5QZFQ
“Room 25” is a notebook of deep-rooted conundrums that Noname delivers quietly and with everlasting tenderness. When she gets thickly personal, which is quite often, you feel it in your soul. Candid renderings such as “I know you never loved me but I f***** you anyways / I guess a b*tch like to gamble, I guess a b*tch like to lonely” make her soft-spoken voice brim with authenticity and a booming depth. These heavy statements feel like ripped diary pages soaked in buckets of milk and honey.
There exists an ephemeral beauty to Noname’s words, like the quick-fading pinks and oranges of a summer sunset. This isn’t to say her lyrics aren’t complex, as many lines (such as “Noname for people to call small or colonize optimism / Noname for inmate registries that they put me in prison” from “No Name”) create a knot of tight-knit poetics that require dozens of listens to fully untangle. It’s the bubbling vivacity of her delivery that makes the words come and go so quickly, much like a passing August thunderstorm. Her detailed lyrics strike so quickly that they’re often gone before they can even be registered. This isn’t a knock against her, but rather a nod to the fact that Noname creates with an attentiveness and a trust in the listener.
So much of “Room 25” is about Noname easing into womanhood as she enters her mid-20s. With her move from her hometown, Chicago, to foreign Los Angeles come many changes in every aspect of life. From missing homey securities (“It’s a party at my granny house / Now birthdays and funerals will only bring the family out” from “Part of Me”) to recognizing the flaws hiding behind the blinding lights of her new home (“LA be bright but still a dark city / So come get your happy and your new titties” from “Prayer Song,”) Noname is forthright about the challenges she faces as she stares down adulthood.

What makes “Room 25” unique is its sense of humor and enduring assurance of eventual peace. Despite all of the mournful cries, there’s an air of self-awareness and wit that lifts up the spirit and keeps it from becoming too forlorn. For every sad confession, there’s a joke about vegan food being delicious or Noname’s “p**** [teaching] ninth grade English” and “writing a thesis on colonialism” that remind us to both chuckle within the madness of everyday life and to understand the seriousness sewed into the punchline.
Noname’s last lines on the album, “Because when we walk into heaven, nobody’s name gon’ exist / Just boundless movement for joy, nakedness radiates,” serve as a reminder to enjoy the now and know that a happy heaven awaits within everything we do, no matter how trite. Her radiant positivity is matched with an acceptance of an eventual end, which is equal parts wise and hopeful.
As Noname would say, “everything is everything.”