UNH Volleyball: Wildcats Struggle in Tennessee but Remain Hopeful for the Future 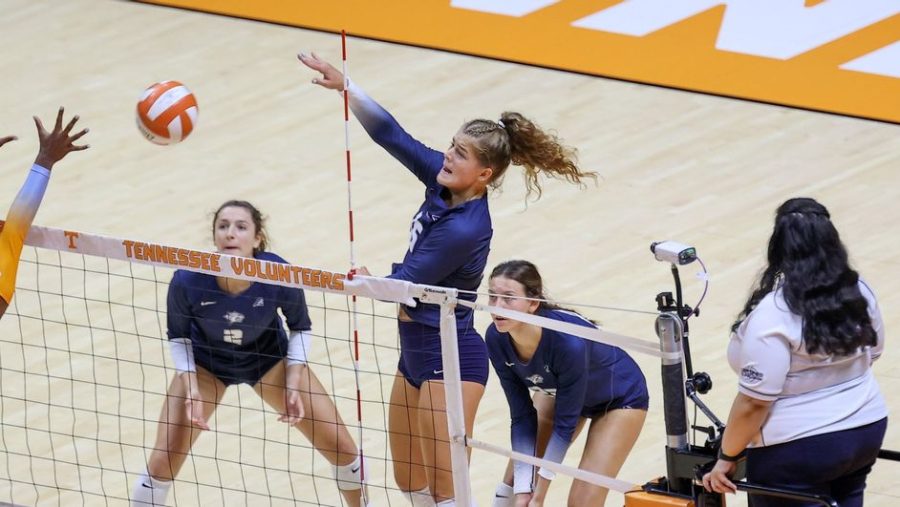 Durham N.H.-  The University of New Hampshire (UNH) Wildcats (6-5) traveled down to Tennessee with hopes of continuing their success they stamped against Holy Cross last week.

UNH wrapped up the Tennessee tournament this past weekend with a 1-2 record. The team opened against Tennessee (6-4) falling in straight sets to the Volunteers by scores of 25-12, 25-14, and 25-12. It was a tough game all around for the Wildcats as they were outperformed in all 6 of the major statistical categories (points, kills, assists, aces, blocks and digs).

The Wildcats next game was against the Citadel Bulldogs (4-6) who entered the game on a three-game win streak. For the second game in a row, the Wildcats fell in consecutive sets. They lost by scores of 25-13, 25-12 and 25-23. It was also the second time in a row UNH was outscored in every category. That loss marked the Wildcats second loss in a row and the fifth in the last 6 games.

The Wildcats needed to make the most of their last game of the tournament, where they would play a winless Norfolk state Spartin’s team (0-8). They were able to take advantage of this as they cruised to wins in consecutive sets. The scores were 25-21, 25-20 and finally 25-16.

Macaulay recorded a game-high and weekend high for herself in assists with 30. First-year libero Katherine Kouba led the game with 19 digs. The win was huge for UNH, as it puts them back over .500, which they have been at or above the entire season.

Season Checkpoint: About 40% of the way through the season the Wildcats have the third best record in the America East despite league play not starting yet.

The team leaders thus far in the major statistical categories are as follows: In terms of offensive statistics, sophomore right-side hitter Marisa Armer leads the team in kills with 73. Macaulay leads the team in assists with 160 and first-year libero Avery Lepore in service aces with 16. Defensively, Oxenknecht leads the team with 34.0 blocks. LePore leads in another category with 105 digs.

Looking ahead: The Wildcats will play three total games at the George Mason tournament this weekend. The first on Friday September 16th in Fairfax Virginia. They will open against the George Mason Patriots (2-6). Their following two games will be played the following day on Saturday September 17th against the Morgan State Bears (0-10) and will close with the University of Maryland Eastern Shore Hawks (2-7). UNH will look to score some much-needed wins against their struggling competition.