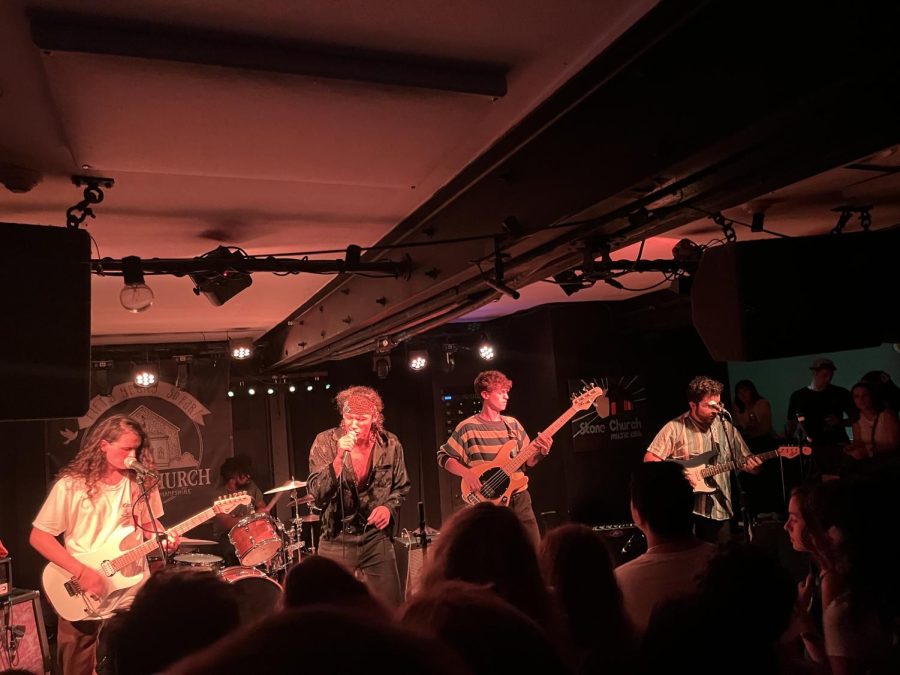 What better way to welcome back the University of New Hampshire (UNH)’s students than with music, community and dancing? This is exactly what took place at the Stone Church Music Club on Sept. 3 – a night celebrating a “Back to School Party” with music from the Rock Dwellers, a UNH-based band, and Rigometrics, a guest from Portland, Maine.

The Stone Church is a music venue located about a 10 minute drive from UNH’s campus in Newmarket, NH, making it the perfect place to support college bands and artists. With a variety of food and music, the venue has something for everyone –  especially college students looking for a fun place to hang out with friends throughout the semester.

Rigometrics kicked off the night at 9 p.m., opening with their intense yet light and upbeat classic rock sound. With just three members – guitarist Josef Berger, drummer Derek Henry, and pianist and vocalist Keenan Hendricks – the band played professionally, confidently and left their audience in awe after their first song. Their 2022 single, “A Chance,” especially captivated everyone’s attention as the majestic piano introduction transitioned into a high-energy song that kept everyone’s eyes glued to the stage as they danced along.

“The Stone Church is a special place that has a rich history of music, and was one of the most accommodating places we have played at one the road,” Rigometrics remarked. “We were fortunate to play in front of such an energetic large crowd right before our debut album is released.” Their debut album, “Rig N’Roll,” was released on Sept. 9.

The Rock Dwellers began their set with “There and Back Again,” an original and the title of their debut EP. The catchy, energetic song had the whole crowd, mostly filled with locals or students, singing along with Harrison Flagg, fourth year UNH student and lead vocalist of the band. From well-played covers of Tears for Fears’ “Everybody Wants to Rule the World,” to Harry Styles’ “Kiwi,” the band of young adult musicians knew exactly what kind of music college students want to sing along to.

“The Rock Dwellers always bring their A-game and 10 out of 10 energy to shows,” said fourth year UNH student Lydia Tusler, who attended the show. “They always play things that get the audience going while mixing in their original music. Not to mention what a great venue the Stone Church is. I can’t wait to see what they both have in store for us this semester.”

All fourth year UNH students, lead guitarist David Milliken kept the audience engaged with his intense stage presence, bass player Nick Ewert with his smiles, drummer Jordan Grant with his attention to musical detail, and recent graduate trombonist and rhythm guitarist Max Schoenfeld with his pure happiness radiating from the stage. No matter where the audience looked, they saw a heart-felt performance.

“We feel so grateful to have a community and place where people can come to let loose free of judgement,” the Rock Dwellers remarked via Instagram direct message. “Nights like last, where the music is as high as the heat, are always the most wonderful.”

The following morning, the band detailed their excitement for what’s to come. “We’ve already written more music and booked more shows – now the next step is to bring our fans with us. We have loved getting to know people who come to our shows and making sincere and genuine connections with them, and we want to keep doing that. Plus, meeting sweet bands like Rigometrics, who by the way, rocked our socks off last night and are the kindest people we’ve met in a long time.”

With crispness, screams of laughter and great music in the air, this event gave students and the local community a glimpse into an exciting fall semester.