MUB Movies are Back! 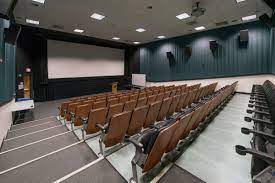 Photo Courtesy of the University of New Hampshire

The Memorial Union Building (MUB) is back to hosting movies this semester, bringing back some normalcy for students, following loosened COVID-19 restrictions on campus. Seven movies will be played throughout the fall semester, with tickets costing $4 with a UNH student ID and $6 for guests. Get your tickets on the online MUB ticket office.

MUB movies will kick off on Sept. 18, with an outdoor showing of Baz Luhrmann’s summer blockbuster, “Elvis,” which stars Austin Butler, Tom Hanks, and Olivia DeJonge. The biographical musical drama tells the story of the beloved singer (Butler) through the lens of his manager, Colonel Tom Parker (Hanks), who finds himself reflecting on Elvis’ life at the end of his own life.

“Minions: The Rise of Gru” will follow, playing from Sept. 30 through Oct. 2. Another prequel to the “Despicable Me” franchise, the animated movie follows the life of Gru (Steve Carrell) at the age of 12 as he dreams of becoming the world’s greatest supervillain during the 1970s.

Showtimes for “Minions: The Rise of Gru”-

Marvel Studios’ “Thor: Love and Thunder” finds Thor (Chris Hemsworth) on a journey of self discovery, but his efforts are interrupted by a killer known as Gorr the God Killer (Christian Bale). Gorr’s goal is the extinction of the gods, so Thor enlists the help of King Valkyrie (Tessa Thompson), Korg (Taika Waititi), and his ex-girlfriend Jane Foster (Natalie Portman).

Keeping the Halloween spirit, the 1993 classic “Hocus Pocus” will also be shown.

“Bullet Train” follows an assassin, Ladybug (Brad Pitt), who is determined to get his job done in peace after previous assassination attempts have been blown out of the water. Of course, his latest mission puts him on a collision course with other lethal assassins from all around the globe while riding the world’s fastest train in Japan.

More details on showtimes and tickets can be found through the online MUB ticket office.