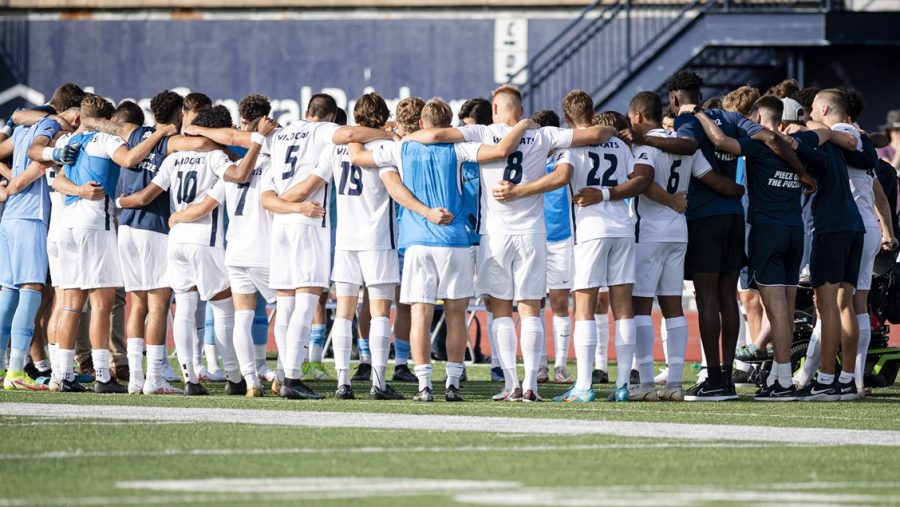 We are certainly in unprecedented waters but at the same time, there is no reason to be concerned yet. The University of New Hampshire (UNH) Men’s Soccer team is off to their first 0-2 start since the 2014 season and has lost back-to-back matches for the first time since October 8, 2016.

The Wildcats kicked off their season on the road in a hostile environment against #20 Maryland from Ludwig Field last Thursday. The match presented the Wildcats with an opportunity to generate some big early season momentum against a difficult opponent. Maryland Head Coach Sasho Cirovski has led the team to three NCAA championships in his 29 years with the program (2005, 2008, & 2018).

The match began with a crisp pace as each side played hard out of the gate. The energy early indicated that it was only a matter of time before the first goal, and it was Joshua Bolma’s playmaking ability that made it happen. The redshirt sophomore was able to put Chris Pinkham in a twist before dropping a clean pass to Nick Richardson who put it to the front for midfielder Griffin Dillon. Dillon headed a beautiful ball to the foot of Hunter George who made it 1-0. It was a tough break for the Wildcats who had their chances to strike first.

Freshman Collin Griffith, in his first collegiate game would go on to make it 2-0 late.

The Wildcats were able to make it interesting after a blocked shot came right to Bilal Kamal who was able to put it into an empty net but ultimately when the dust settled, UNH fell short. Next up on the schedule, unranked Boston University.

Before Boston University came into Wildcat Stadium, UNH had only ever lost two games there all-time, an impressive statistic. However, once the Terriers left the building last Sunday, that number was three.

UNH dominated the game from start to end. They outshot BU 11-1 in the first half, 23-3 for the match, and outdid the Terriers 18-1 on corner kicks.

“You got to finish your chances,” Head Coach Marc Hubbard said. “I think we had a few early on that were wide open… when you create 18 corners and a lot of long throw opportunities you probably have 30-35 good dead ball scenarios to take advantage of which we didn’t.”

The dagger came late, and it was a crowd silencer. Ryan Lee showed off his incredible speed getting past the Wildcat defense and roofed one right over Jassem Koleilat to put BU up 1-0 with just over 12 minutes remaining. It was a simple case of the Wildcats letting the Terriers hang around for too long.

Marc Hubbard believes that it will get better with time, “It’s soccer so sometimes these things happen so you don’t want to panic quite yet because I think anytime you create that number of chances and the more time you play with each other and move forward we’re going to still be in a great spot.”

Taig Healy and Johann Von Knebel were bright spots in the loss. Healy was noticeable early on forcing turnovers in the Terriers end, while Von Knebel headed one right off the post with 5 minutes to play.

The Wildcats offense certainly would welcome Tola Showunmi back as soon as possible.

“He just has a little bit of an eligibility penalty because he went down after getting drafted… he will play this year it’s just a matter of when,” Hubbard noted.

The Wildcats are in search of their first win, home win, and lead as they host VCU from Wildcat Stadium today at 6:00 P.M. Look for the ‘Cats to come out flying.