UNH Volleyball: Wildcats Jump Out to 4-0 in Home Tournament 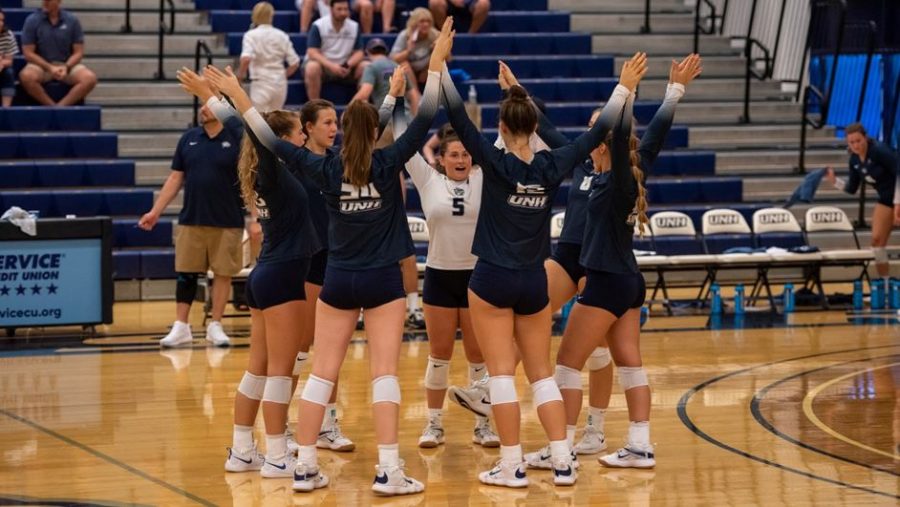 The UNH women’s’ volleyball team had finished 2021 with a more than respectable 16-12 regular season record, which was good enough to earn themselves a semi final appearance in the America East playoffs last year. After a disappointing 0-3 loss to Ualbany in the semis, the team had many of the key starters returning for the 2022 season. Expectations for the team’s success this year remains high.

Among the key returners is Junior Kelly Kaufmann, the teams 2021 leader in blocks (80.0). Joining her is Mia Pagliarini, the team’s far and away leader in Digs during the 2021 season (443).

Among the most important returns is Wren Macaulay, who rejoins the team for her senior season as one of the four captains. Macaulay who was the teams 2021 leader in service aces (35) and assists (917) will look to lead this team again with a strong veteran presence. Other than Macaulay the other team captains are Kaufmann, Erin Hedrick, and Hannah Serbousek.

The Wildcats have been able to use this team’s continuity and strong leadership core to start off the season with a red hot 4-0 record. The Wildcats competed in the Holly Young invitational, a tournament hosted here at UNH honoring the late Holly Young who was a former UNH volleyball player who tragically lost her life in 2008 after a battle with cancer.

UNH’s season started out with a strong 3-0 Victory over the Merrimack Warriors. UNH outperformed the Warriors in every major statistical category leading to the win in straight sets.

The team’s second win over the weekend was their closest and most competitive contest to date. After dropping the first set to St. Francis, the team was able to rally back and win three consecutive sets to secure a 3-1 victory with each set being a closely contested battle. The team was able to get a boost behind an astonishing 31 assist performance from Macaulay.

The third game of the year marked the biggest mismatch of the season, as the Wildcats opened the first set against St. Peters with a 25-6 win. The Wildcats did not look back as they proceeded to win the next two sets en route to their second 3-0 victory in two games.

UNH was able to wrap up their weekend and increase their undefeated streak to 4-0 following yet another 3-0 win over Hartford. Marisa Armer led the team in kills for the third consecutive game with 9 in the contest against the Hawks, and 27 in that stretch respectively.

The weekend was a massive success for the Wildcats, as they left the Holly Young Invitational as a confident and undefeated team. The Wildcats have outscored their opponents 12-1 in their first four games of the season and look to take that momentum into their next set of games this weekend.

You can catch the Wildcats next looking to defend their undefeated start to the season this Friday, as they open the weekend against Fairfield (1-2) in the Villanova Tournament. Following that match, they have a double header on Saturday September 3rd against Lafayette (0-0) and Villanova (1-2).