UNH Women’s Soccer: Wildcats kick their season off in the Big Apple with a win and a loss 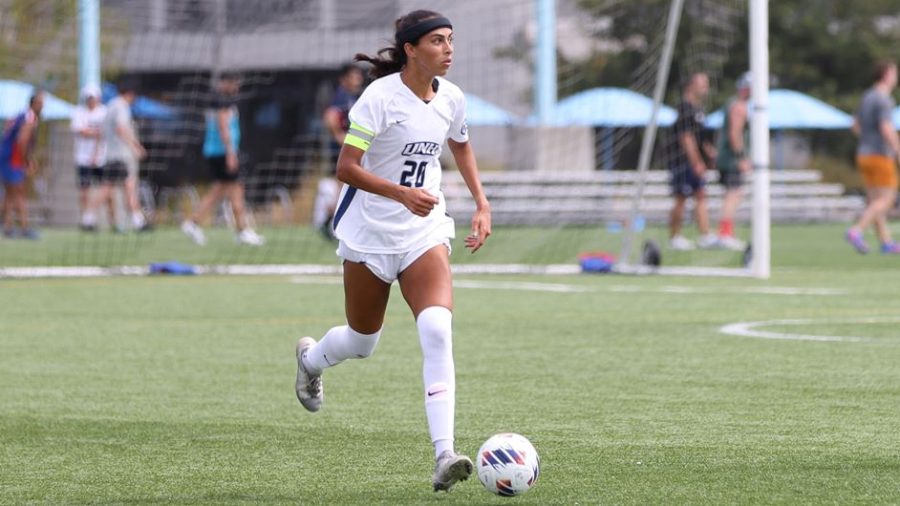 While a 1-1 start is nothing to rave about, UNH proved they belong with the best teams in the Northeast, imposing their fast, defensive-minded style in both games. Despite dropping game 1 of the season, head coach Steve Welham was satisfied with the performance.

“I think the first game actually went pretty well for us against an ACC team with the very finest of margins, a 2-1 game”, said Welham

UNH welcomed multiple transfers to the team this season and immediately felt the impact of those changes. Three new starters in this year’s lineup included two transfers: forward Gudrun Haralz from the University of Miami and forward Maddy Warren from Texas Christian University.

In addition, coach Welham noted the third and final new starter for the Wildcats significantly impacted the two contests.

“Delaney [Diltz], the redshirt freshman, had her collegiate debut and played outstanding,” said Welham. “[She] did a great job on our backline as a central defender,” he continued.

A lot of praise for the young player, Diltz, is seen as an impact player that helps solidify this team’s defense. UNH is a team that prides itself on playing a clean and consistent game, making her a perfect fit.

Starting off the season strong can be a difficult task, as UNH has had a poor recent history of the first month of play. Last season, the Wildcats began the year with a 2-5-1 record before rebounding to finish with a conference title berth, where they ultimately lost to the University of Vermont. However, the team has come into this season ready to go with fresh legs.

“We felt we were very fit,” said the head coach. “There’s no question we can tell from the opposition, the coaching staff that they were very nervous in the last 15, 20 minutes, and we were really going after them to get that tying goal”, Welham said.

Confidence in the style of play is as important as anything when the season gets underway. Welham and his staff believe that this team has started on the right foot with how they have demonstrated the systems they’ve been coached.

The ‘Cats traveled from upstate New York to the heart of Brooklyn when they faced off against St. Francis. It wasn’t a major surprise as the Terriers attempted to throw UNH out of rhythm after the two teams reached a scoreless tie in last season’s contest.

“The second game was a lot different in terms of styles and contrast of play, everything from being in Syracuse,” explained Welham. “So we were able to find a way to win a very greedy game on Sunday and having to compete against a team that was really trying to nullify our style of play and were very, very physical, and we had a couple of injuries and hoping everybody will be okay for Thursday,” he continued.

Calling it a physical game on Sunday would be an understatement. The Terriers committed 16 fouls, while the Wildcats surrendered just seven. The unfortunate result was the departure of graduate goalkeeper Cat Sheppard in the early going of the game. Sheppard was the target of a stretched effort of the attacking Terrier player on a counter-attacking opportunity.

Redshirt freshman Sally Rainey filled in and kept the clean sheet for the ‘Cats as they picked up the first victory of the year.

The ‘Cats look ahead to their home opener against Siena College (0-1-1, 0-0-0) on Thursday, August 25th at 6 pm in Wildcat Stadium. A banged-up squad will look towards their depth to propel forward and strive for another win.