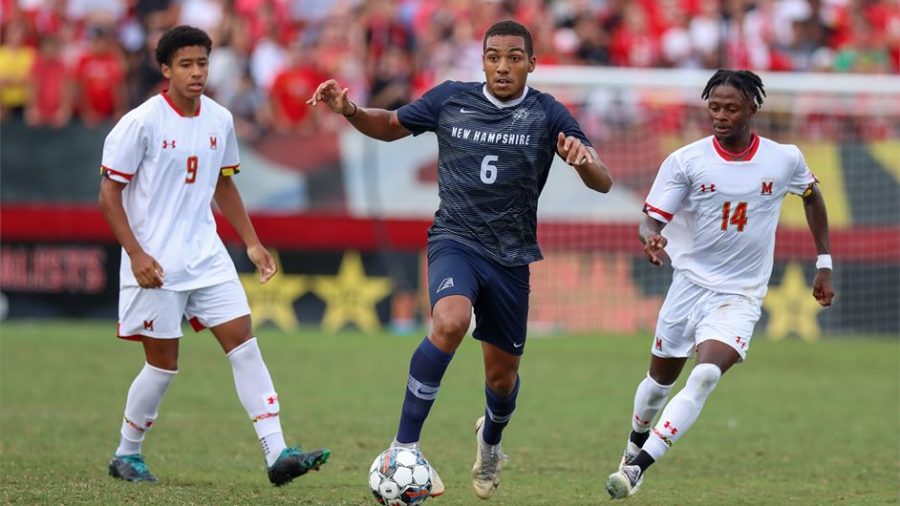 DURHAM, N.H. – The 2021-22 season for the University of New Hampshire (UNH) Men’s Soccer team was undoubtedly one to remember. From the highs to the lows, from the thrill of victory to the agony of defeat, everybody left everything they had on Paul Lorenz Field at Oregon State in the season’s final match.

Let’s begin our walk down memory lane with one of the lowest lows this past year which came in the America East championship contest against the University of Vermont (UVM). Close your eyes and let the great broadcaster Cam Beall fill your mind, “Straight into the box destined for Adam Savill, and he gets a forehead on it. Gets the rebound, COUNT IT… Yves Borie heads straight for the Wildcat fan section, Nate Silveira joins him, and they quiet the Wildcat faithful.”

UVM’s Borie finished with the lone goal in the America East Championship game, ultimately knocking off UNH and stopping them from their fourth straight America East crown. The Wildcats were still lucky enough to hold onto a first-round bye and the 16th seed in the tournament, but everybody was floored by the strike that silenced Wildcat Stadium, which tarnished an undefeated season.

Let’s turn to ESPN’s Top 10 plays for our highest high in the second round of the NCAA tournament against the University of North Carolina (UNC). “#10, New Hampshire Men’s Soccer hosting UNC, Bridger Hansen, La Bicicleta! That was amazing. Stepped over the defender and got it in.”

UNH defeated UNC 4-1 in their NCAA playoff opener, but Bridger Hansen’s bicycle kick stole the show as the opening goal in the game. For that victory to come one short week after the heartbreaking loss to Vermont showed a lot about the ‘Cats prowess and determination.

Flying on the New England Patriots jet to play Oregon State was a big high too for the round of 16 game, but ultimately, the ‘Cats lost to the #1 seed 1-0. In light of this, there were many things to build on heading into this year.

The Wildcats are ranked #9 nationally coming into this season, a higher rank than they had coming into last year when they opened the season at #20. The team is also parked atop the America East coaches poll with seven first-place votes. Vermont ranks second with one first-place vote, and given that the conference’s head coaches weren’t permitted to vote for their teams, UNH’s head coach Marc Hubbard gave the lone nod to Vermont.

The Wildcats have high expectations as they look to outdo their historic win total of 17 from last season and advance to their first ever elite eight after falling short in the Round of 16 at Oregon State last November.

The roster is headlined by electrifying goal scorer Tola Showunmi who is returning as a graduate student this season. Showunmi led the team last year in goals (10) which placed him second in the America East in this stat. Showunmi also held the team lead in points (23) which again was second most in America East. It was unclear after Atlanta United FC drafted him in the 2022 Major League Soccer (MLS) whether he would be back, but Tola is returning to Durham for one last run. Showunmi will provide the Wildcats with much-needed goal scoring after the departure of key graduate students/seniors Jacob Gould, Victor Menudier, and Bridger Hansen.

Goalie Jassem Koleilat, one of the Wildcat’s most essential players, returns for his senior season. Coming off of an incredible year in which he ranked second in the nation in goals-against average (.427) and tenth in shutouts (8), UNH as a team led the country with a .466 goals-against average which in part was thanks to Koleilat.

The season kicks off with a tough test on the road Thursday against #20 Maryland, which will be broadcast nationally on ESPNU at 6 p. m. The home opener kicks off on Sunday, August 28th, at 5 p.m. from Wildcat Stadium against Boston University. It’s worth noting that the Wildcats are 21-0-4 over their last 25 regular season games. Their final regular season loss was 1-0 against UAlbany on November 1, 2019. After a dominant year all around last year, the Wildcats are poised to make a serious run at the program’s first national championship this year.