The New Hampshire • May 10, 2022 • https://tnhdigital.com/21355/news/unh-community-advocates-for-reproductive-rights/ 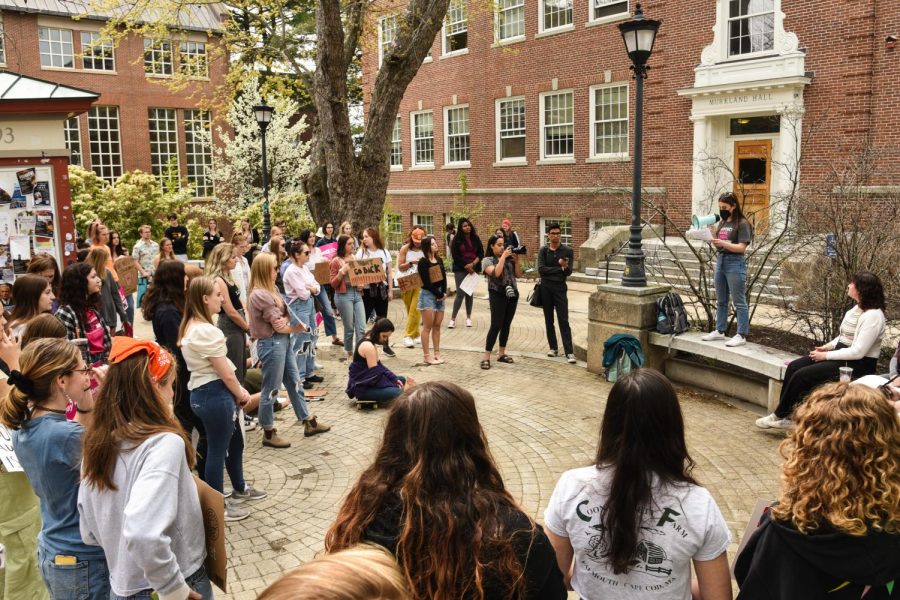 Durham, NH- Members of The University of New Hampshire (UNH) community gathered on Thompson Hall (T-Hall) lawn Friday equipped with their voices and signs as they rallied to protect their reproductive rights.

UNH’s Sexual Violence Action Committee (SVAC) and UNH’s Planned Parenthood Generation Action (PPGA) were the two organizations that hosted the rally. The event was quickly organized this past week after the news outlet Politico released a Supreme Court decision draft that threatens the future of Roe v. Wade.

“I am so happy we live in a community where we can come together like this,” said Izzy Medeiros, a speaker and PPGA co-president.

In the span of two days, through mostly social media advertising, PPGA and SVAC were able to generate a great crowd filled with many passionate advocates.

As supporters continued to file in, students and organization members took turns getting their voices heard. Many shared information on the current state of Roe v. Wade and possibilities for the future, others acknowledged shared emotions and feelings, and some even talked about personal situations and experiences.

“We must fight for the people that have no voice,” encouraged Emma Pryor-West, speaker and UNH student. “If we don’t fight right now, we will be fighting for the next twenty years, and your children will be fighting.”

Pryor-West and others stressed the importance of speaking out. In a time where course-of-action seems limited, speakers urged supporters to make themselves heard.

The rally moved down to Main Street as all in attendance proudly marched past T-Hall with their signs waving in the air. They chanted loudly as cars passed by with supportive honks.

“I am not originally from around New Hampshire, and I grew up in places where I couldn’t speak my mind on these issues,” said Isabel Cole, a member of PPGA. “It’s really nice to be able to come out and have a bunch of people that are trying to make a difference.”

It was a successful day in the eyes of Medeiros, as she mentioned in an email to the New Hampshire. “I hope people left the rally feeling empowered that there are students on this campus who will support their beliefs in equality and will fight alongside them for their right to choose,” wrote Medeiros.

“We are not alone, there are so many people right now who are so angry at the potential of Roe falling,” said Muriel Bennett, a member of SVAC. “We can make change if we all speak up and rally together, because we are not the minority.”