Young talent could be spark that reignites Wildcats hockey 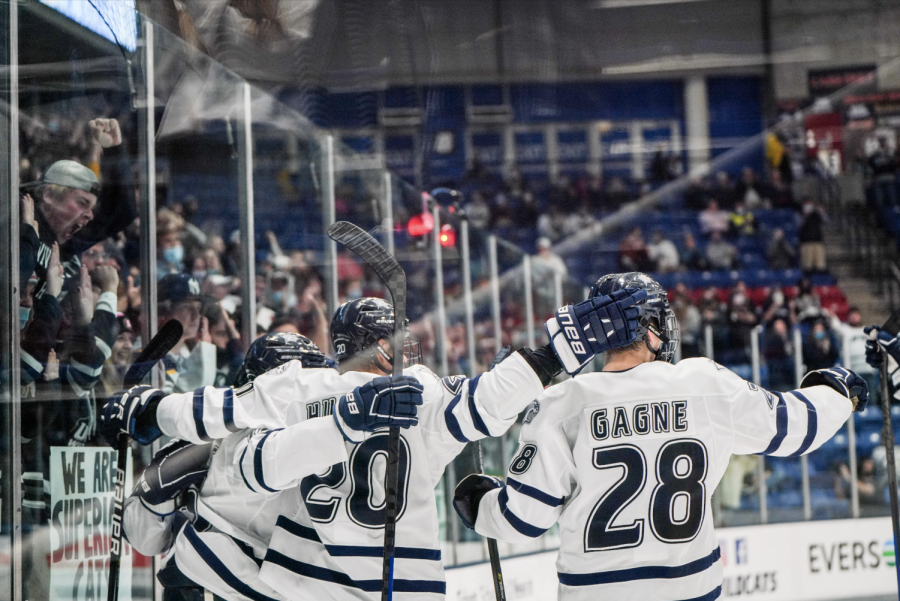 We’re seeing a shift in the NHL where young superstars are making a large impact soon after entering the league. There was an incredibly similar trend this past year with the University of New Hampshire (UNH) Wildcats when watching the rookies who excelled on the ice.

UNH welcomed a rookie class of six newcomers to the team this past year headlined by defensemen Colton Huard and Alex Gagne as well as forwards Liam Devlin and Robert Cronin. All four made the transition from the United States Hockey League (USHL)  the season prior and were relied upon to produce top minutes when head coach Mike Souza saw fit.

With a large senior class leaving the team this year, UNH is looking at one of the strongest and most exciting young cores they’ve had in quite some time.

New Hampshire is now led by four underclassmen who are trying to break the program’s nine-year NCAA Tournament drought.

Devlin was a late commit to the team last year, but he made an immediate impact when he stepped onto the ice leading all UNH rookies in goals with nine while tying his teammate Huard for the rookie lead in points with 16. Both players were Hockey East rookie standouts as they shared a tie for sixth place in all of Hockey East in terms of overall points for first-year players. Huard also won Hockey East Rookie of the Week along with the Hockey East Defender of the Week awards over the course of the season. Devlin also brought in a Rookie of the Week award during the first week of January.

Cronin is a right winger for the Wildcats and played a crucial role on the team. During his first year he garnered consistent top-six forward minutes on the top line with the team’s leading goal scorer Jackson Pierson. Cronin finished his rookie season with seven goals and 12 points in 30 games.

Finally there’s Gagne, a defenseman who didn’t always pop up on the stat sheet but was visibly one of the Wildcat’s best defenders last year as he used his 6-foot-4 frame to push forwards off of the puck. Gagne concluded the season with one goal and eight points in 33 games. He also finished second on the team in blocked shots with 39.

This group earned major playing time on the ice last season as a result of their excellent performances. Devlin mentioned how he moved up the lineup and into a bigger role as the season went on.

“I’d say that was due to hard work and not worrying about things, just trying to play my own game,” Devlin said

Huard felt similarly and he feels like he “was given some opportunity and was able to capitalize and make the most of that opportunity to help our team be successful.”

There were multiple times this past year where all four were given the chance to show off their game and impress the coaching staff. Having experience playing top minutes on the team will allow this group to develop faster than others have in the past.

With development and success comes winning. Despite finishing with a record of 14-19-1, UNH provided flashes of brilliance within the Hockey East, beating three nationally ranked opponents. But next year is a year to build on those victories and push them further than they have in almost a decade in Durham. Their next step is getting back to the NCAA Tournament.

“I think we can absolutely [make it to the NCAA Tournament] next year,” said Cronin. “Honestly we could have a great shot and even the years after that. You look up at the banners with all the NCAA tournament appearances and it’s in the back of your mind of where this program used to be and to where you want to bring it back… All you want to do is bring success back and nothing’s better when we’re winning, life on campus is great and everyone’s happy.”

Gagne agreed with Cronin and offered similar thoughts on his expectations for next season.

“I think everyone in our [first-year] class who is returning will bring a key element to making the tournament,” explained Gagne. “You can just tell the energy’s up everyday, we talk about it as a group everyday with our coach, there’s nothing to hide from, we know what our goal is and we just want to reach our goal.”

Of course with reaching this goal there is still work that needs to be done when no one’s watching. With opening night still six months away there’s a laser sharp focus from all four to develop their game at a higher level before fall comes around.

Devlin’s first order of business is to “put on 10 pounds and get stronger, while also working on puck protection.”

Huard was physical on the puck this past year but is looking to work on being even better at that next year noting, “I want to improve my quickness and also closing on guys in the D-zone.”

Cronin preached a similar mindset to his two teammates about what his offseason work will be focused around. He’s looking to get quicker, faster and continue to improve his shot as he has the last few years.

Gagne’s main focus of improvement this offseason was overall skating as he also explained, “you can never not be a good enough skater.”

The 2021 Tampa Bay Lightning draft pick also has plans to attend the team’s developmental camp this offseason. Gagne was a sixth round selection to the reigning Stanley Cup Champions last year.

“It’ll be fun to use those resources and take them back to school and to see what kind of input on my skill set along with tips they have,” said Gagne. “I’m excited.”

With a plethora of upperclassmen on the team this past season there were plenty of opportunities to learn from guys who had been around the program for at least four years. Despite being incredibly talented on the ice there is still plenty of experience to be gained at this level for this young core. These intangibles are something each guy will naturally take a step forward with next season due to the leadership of this past group.

“It was really nice to have Willy Mack [Will MacKinnon] there on the back end, he’s a really good leader,” said Huard.

Gagne also had high praise for MacKinnon’s helping hand when he joined the team.

“Any little question I had or anything after practice, about the systems, school, how coach wants a drill done, he was so instrumental and helpful to me in that area and It just helped me grow on the ice,” Gagne explained.

Despite the youth of the group Cronin is confident in their leadership abilities.

“Even being sophomores next year I think we’re going to be great leaders on and off the ice, we all want to lead even if you get a letter or not,” said Cronin. “We’re going to lead our young guys to play the UNH way.”

While the four may have youth on their side, they believe the sky’s the limit. Huard even went as far to say,  “our team should be able to compete for a Hockey East Championship next year.”