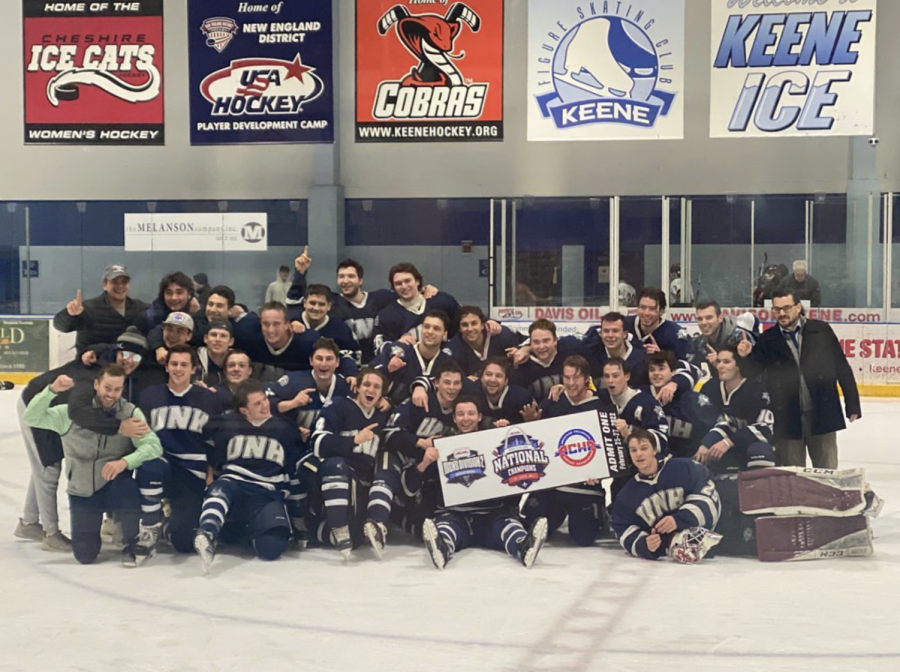 On Saturday, Feb. 26, the University of New Hampshire’s (UNH) men’s club hockey team traveled to Keene to compete in the ACHA Division II Northeast Regional Hockey Tournament. The following day they returned to Durham victorious. The Wildcats had punched their tickets to compete in the national championship in St. Louis, Missouri first by beating the University of Vermont (UVM) and then Boston College (BC). However, the team had faced their fair share of adversity throughout the season.

The Wildcats started the season off on the wrong foot to say the least. With an 0-6 record through the first semester, it seemed that the team was bound for a short season, never mind in contention for a championship.

Despite the Wildcats’ turbulent start, Cam Stoddard, the coach of the team for the last four seasons, gave praise to his group.

“We were able to dig out of the hole and overcome the adversity … The captains and the seniors kept the wheels on the bus when it seemed like they were about to fall off,” Stoddard explained.

The team began to dig themselves out of this so-called “hole” early in the second semester. Stoddard and they rest coaching staff made the decision to give some younger players more ice-time. This decision proved to be vital in the team’s success.

“Not only did it create buzz in the room, it created healthy competition that made the guys just uncomfortable enough to step up to the plate,” said Stoddard.

The adjustment led to the team’s first win of the season against Merrimack College. Their victory against Merrimack proved to be a clear turning point, as they went on to finish the regular season with a record of 11-8-1.

In the team’s first playoff appearance last weekend they emerged triumphant over UVM and BC. The team’s performance vanquished any doubts lingering in mind of senior captain Bryan DeChristoforo. Despite the challenges the postseason inevitably entails, DeChristoforo is confident in his team’s ability to perform on the ice.

“Last weekend was an emotional weekend to say the least and I am glad we were able to beat some very skilled teams. We proved to everyone that we are not the same team we were in the start of the year,” said DeChristoforo. “I feel very confident in our team and know that we are going to make a statement at nationals.”

The Wildcats’ tickets may have been punched but they faced one final hurdle before heading to St. Louis: funding. The club hockey program receives very little funding from the school and a trip to nationals was not paid for by the university.

“We need people’s help to go to nationals. We’re a self-funded team and we pay dues, but our dues just don’t cover a trip to nationals,” said junior defenseman Matt Bonavita. “The donations will go toward things like food, hotels, flights and rink costs.”

The team set up a donation bank through UNH. The link to donate could be found on the team’s Instagram, Twitter, and website. The team was asking that their supporters aid them in making the trip to nationals more affordable.

The Wildcats had a roller coaster of a season; regardless, they made it to St. Louis to compete on the national stage. UNH eventually went on to lose to Montana State University on Wednesday afternoon by a final of 6-3 to end their season and send them back to Durham.