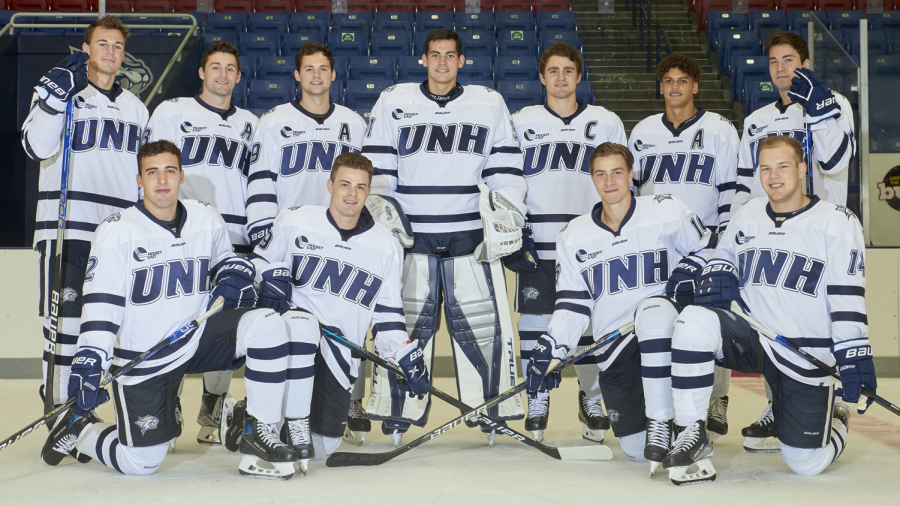 Verrier previously played for the USHL Green Bay Gamblers before arriving in Durham in 2018. This season, the 23-year-old tallied a career-high seven points for the Wildcats. Verrier finished his four-year tenure in Durham as an assistant captain and totaled five goals and 18 assists for 23 total points.
D Will MacKinnon: ECHL Affiliate of the Philadelphia Flyers the Reading Royals

Coming off the second-best year of his collegiate career, MacKinnon will trade the Wildcats’ blue and white for the Royals’ purple and black. His six points (one goal and five assists) during the 2021-22 season are second-best in his career. Over his 119 collegiate games, MacKinnon logged five goals 19 assists and served as the team’s captain for his senior season.
F Eric MacAdams: ECHL New Jersey Devils Affiliate the Adirondack Thunder

MacAdams leaves collegiate hockey on a nine-point season while his 42 penalty minutes led the team. That said, the veteran forward concluded his time in Durham with 41 total points and served as an assistant captain during his last two seasons.
F Filip Engarås: AHL Edmonton Oilers Affiliate the Bakersfield Condors

After being drafted by the Oilers in the sixth round during the 2020 NHL Draft, Engarås finally makes the jump to pro hockey. The senior was a workhorse down the stretch for the Wildcats, tallying eight points in his last seven games. Engarås’ 21 points during his final season was a career-high and third best on the team while his 14 assists were second on the team. In addition to this, the Swede’s 338 faceoff wins were 10th best in the Hockey East.
F Tyler Ward: ECHL Affiliate Boston Bruins the Maine Mariners

The senior stays in New England on the heels of a tremendous second half of the season. Over his last 15 games, Ward scored 19 points including a hattrick in the opening round of the Hockey East Tournament. Ward’s late surge leaped his total to 27 points and allowed him to claim the team lead in points, assists, power play goals and second in total goals scored. His production on the ice was coupled with a workhorse mentality as Ward played in all 34 games this season.
F Joe Cipollone: ECHL Washington Capitals Affiliate the South Carolina Stingrays

While Cipollone has signed a contract with the Stingrays, the deal is only for an amateur tryout, meaning there’s no guarantee Cipollone will make the roster. Regardless the 24-year-old closed his time in Durham with career highs in goals, assists, and points while playing in 30 games.
G Mike Robinson: ECHL Philadelphia Flyers Affiliate the Reading Royals

After five years and 80 starts with the Wildcats, Robinson has a new home. The San Jose Sharks drafted the New Hampshire native in the third round of the 2015 NHL Draft, but after going unsigned according to Eliteprospects.com, Robinson stays on the East Coast and follows Will MacKinnon to Reading. The goaltender heads to the ECHL on a high note after an improved 2021-22 season saw him improve his goals-against-average and his save percentage following a down 2020-21 campaign.