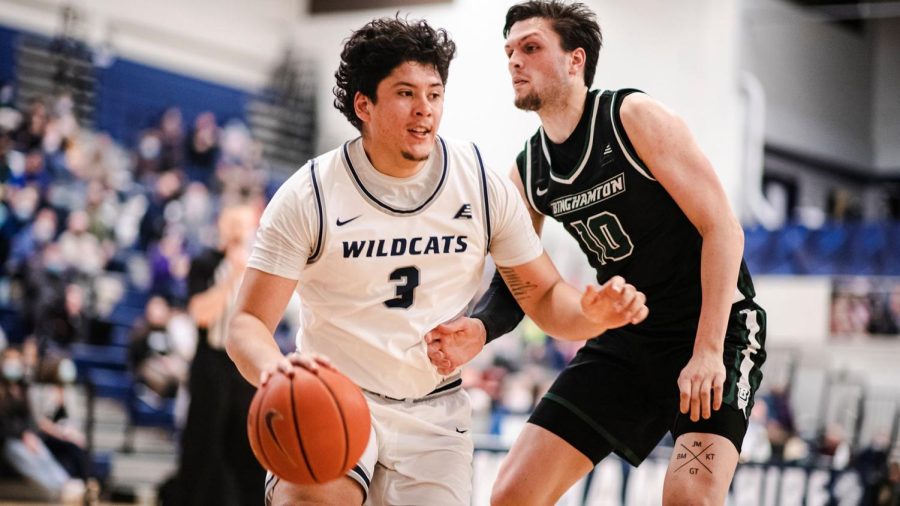 DURHAM, N.H. – It took a full 40 minutes on Saturday for the University of New Hampshire (UNH) Wildcats (14-12, 9-8) to create any sort of separation over the Binghamton Bearcats (11-15, 8-9) as well as the rest of the America East (AE). Entering the final week of the regular season, Saturday’s victory for New Hampshire was emblematic of the word head coach Bill Herrion has used to describe his group all season long – resilient.

“When I started off as a young coach everybody said it’s going to be hard when you’re young, but it gets easier as you get older,” Herrion explained as he shook his head. “The crazy thing is that 31 years as a head coach I don’t think there’s been an easy one.”

This has been the case for the Wildcats all season long as they’ve struggled to gain momentum throughout much of their conference schedule. As of late, however, New Hampshire feels like they’re beginning to live up to their lofty preseason expectations.

New Hampshire’s senior forward Nick Guadarrama gave credit to Binghamton for the way they played in the first half. The Bearcats sent the Wildcats into the locker room tied at 28 points apiece.

“They were playing really physical,” explained Guadarrama. “Taking Blondeau [Tchoukuiegno] out of the game was a good game plan by them, it got us out of our motion and our groove.”

Tchoukuiegno had just four points at halftime before finishing his day with 13 points, six rebounds, four assists, a block and two steals over 40 minutes.

UNH got a lift early from senior Tayler Mattos over the first eight minutes of the ballgame. The 6-foot-11 big man netted six points with four rebounds, two assists and one block in the waking moments of Senior Day.

Herrion liked the effort from Mattos in the opening sequences but says he’d like to see him become more consistent offensively down the stretch.

Contrary to the usual scouting report of a Herrion-coached team, this year’s version of the Wildcats have been searching for defensive consistency all season. However, these Wildcats are no strangers to putting the ball in the bucket.

New Hampshire found themselves down five with about 15 minutes to play. Despite not being honored in the Senior Day festivities, it’s fitting that UNH’s super senior Chris Lester was the one to get the ball rolling in the final stages of the afternoon. Lester played five minutes in the game – the fewest amongst all Wildcats – but his lone basket came by way of a triple at the top of the key and played a major factor in the court tipping back in New Hampshire’s favor.

The 3-pointer was followed up by sophomore Marco Foster, senior Jayden Martinez and Tchoukuiegno each adding baskets of their own from behind the arc. This momentum resulted in a 19-9 run for UNH over about seven minutes.

Foster supplied the nail in Binghamton’s coffin when he buried a pair of threes in the final 90 seconds to build up a seven-point lead. He shot 4-for-9 from downtown and totaled 14 points over 32 minutes logged. The Oklahoma Christian transfer has been one of the biggest factors in putting the Wildcats over the top offensively. Foster has sunk nine 3-pointers over the last two games and is the second-best 3-point shooter in the AE.

“Any time [Foster] shoots it I think it’s going in,” said Guadarrama. “That’s how good of a shooter he is. I have a lot of trust in him.”

“The kid can really shoot the ball,” Herrion added. “He’s a big-time shooter.”

New Hampshire and Binghamton had the first game on Saturday’s slate, so nobody really knew what exactly the win meant for UNH until the dust had settled on the weekend. What Herrion does know, however, is the magnitude of each game in a logjammed America East.

“I try to stay away from exactly analyzing the standings,” explained Herrion. “But I know kind of where we’re at, and I’ve got to have a sense of that – these games are big.”

How big exactly? With one game to go (two for Hartford and UMass Lowell) the Wildcats are clutching to the No. 3 seed and could drop down to No. 5 with a loss and miss out on a home quarterfinal game.

Playing in Lundholm Gymnasium has kept the Wildcats above water this season. New Hampshire is 10-3 in their own gym and 4-9 on the road.

The Wildcats will be on the road one last time on Tuesday to take on the UMass Lowell River Hawks (11-16, 6-10). For the Wildcats to remain as at least the No. 3 seed, they’ll have to take care of business in Lowell and keep an eye on Hartford who owns the tiebreaker over New Hampshire.