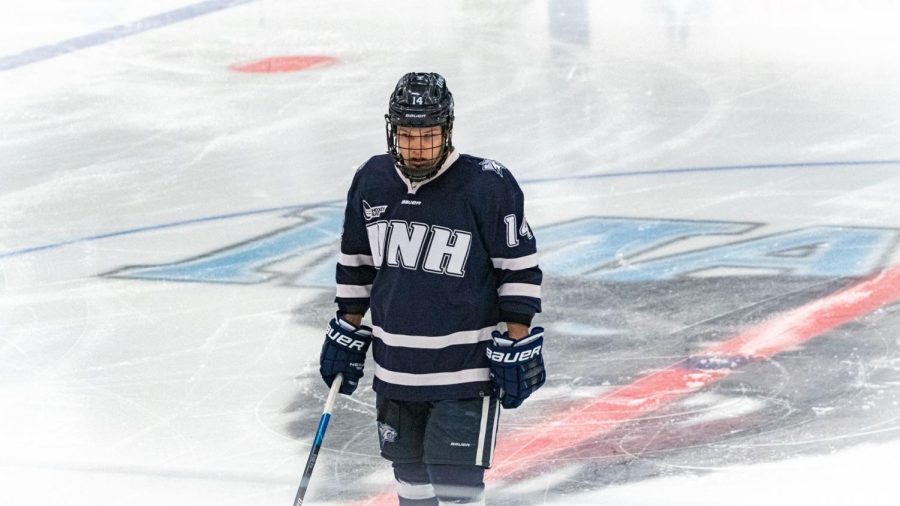 Over their last three decades, the two teams have handed the reigns of the relationship back in forth. From 1989-1993, the Black Bears roamed the coast unopposed, winning 18 out of 19 straight and ending the decade 27–12–4.

UNH looked poised to claim their second-straight decade on the backs of another six-game winning streak. Yet Maine rallied, winning six out of the last eight meetings of the 2010s to reclaim control.

With a new decade underway and the two teams meeting for fourth and fifth times, this weekend’s series between the two offered an opportunity for either squad to lay an early claim.

The Black Bears staked theirs 42 seconds into Friday’s opener. Sophomore forward Lynden Breen notched his 16th goal of the season on a second-chance shot. Despite UNH senior goaltender Mike Robinson crowding his near post, Breen aimed for the goalie’s far post. As the puck crossed the crease, Breen flew behind the net and the Black Bears never looked back.

With 14:20 remaining in the first, senior Jacob Schmidt-Svejstrup used his 6-foot-2 frame to screen Robinson. Schmidt-Svejstrup’s placement allowed him to redirect the shot into the back of the net and add onto the lead.

By the time the first had ended, the Black Bears had blasted past their average offensive output, scoring four goals, their most in a single period all season. Even worse for the Wildcats, all four came in even strength and only one of their shots hadn’t required Robinson to make a save.

“The guys were ready to go, and we caught them a little flat-footed and found a way to grind it out,” Maine head coach Ben Barr said. “We got to the net and got some greasy goals. Obviously, it wasn’t a 4-0 period. We just scored and their kid didn’t come up with the saves and [Maine sophomore goaltender Victor Ostman] did.

For the Wildcats, the most painful part of Friday was not that they’d allowed four goals in a single period for the first time since Oct. 28. Nor was it that Robinson, the reigning Hockey East Goaltender of the Week had been benched after the first.

The most painful part was that every time a shimmer of hope started to shine through the lights of Alfond Area, the Black Bears blotted it out.

The first shimmer for the ‘Cats came courtesy of senior Filip Engarås. The Swede beat his fellow countryman with a quick release to get the ‘Cats on the board. However, 34 seconds later, the Black Bears struck back to undo Engarås’ marker.

Hope appeared on the Orono horizon once again thanks to the stick of UNH sophomore Nick Cafarelli. To an outsider, Cafarelli’s goal could have a moment for the ‘Cats to climb off of. A five-minute power play two minutes later only amplified those feelings.

UNH junior netminder David Fessenden, who replaced Robinson, fired out of his net to meet the two. While Fessenden beat Poisson, his attempt to clear the puck didn’t dart down the ice. It bounced off Poisson’s chest. The junior gathered the puck, shot it from the bottom of the left faceoff circle and over the outstretched bodies of Fessenden and another defender.

On a good night, Poisson’s shot would’ve hit the crossbar or the post, or it would’ve missed both completely. Friday was not a good night.

“I’ve never been a part of such a crazy play,” Poisson said to the Bangor Daily News. “I was the [Maine player] on the ice with a stick and they had five sticks. The goalie shot it into my chest and he gave me the empty net. It was pretty cool.”

UNH head coach Mike Souza did not view the goal with such awe. “I’ve seen three-on-five shorthanded goals but I’ve never seen a one-on-five,” Souza told the Bangor Daily News. “That was a poor job by us managing the power play. We were shouting from the bench that they only had one stick.”

The Black Bears coasted through the third like a schooner through the sea. A lone UNH goal in the third was the only wave that made the ship waver. But it, like every other obstacle, failed to knock Maine off their route to a 6-3 win.

Twenty-four hours later, the Wildcats reminded the world of Forrest Gump; like a box of chocolates, you never know what iteration of the Wildcats you’re going to get.

On Saturday, fans got the best version and then some. The defense was smothering holding the Black Bears to just 18 shots, the goaltending made the saves it had to, and the offense was electric notching 48 shots, a season-high, and three power-play goals.

The second line led the way as they have all weekend. On Friday, all three members of the second set of forwards, Cafarelli, Engarås and junior Tyler Ward scored. Similarly, Cafarelli and Ward lit the lamp on Saturday. The only difference is these goals were not cannon fodder.

While the second line floated the Wildcats through the first 40 minutes, the first line finished the job in the last 20.

With 16:49 remaining, senior first-line center Jackson Pierson passed his attempted wraparound to sophomore forward Cam Gendron. Ostman was able to withstand Gendron’s one-timer but failed to pivot towards the other post. Pierson’s line mate, first-year forward Liam Devlin finalized the play and fired the puck into the nylon net to hand UNH a 3-2 lead.

“I was proud of the guys’ response and their resiliency,” said Souza. “They were ready to play. Ostman was awesome. He gave them a chance to win it. Our power play has struggled all year, but it won the game for us tonight.”

UNH breezed through the rest of the affair with little fanfare. In the game’s dying moments and Maine’s heartbeat mythically low, Engarås scored his second goal of the series to conclude an uneven Border Battle.

Barr rightfully commented following the game, “UNH played great. They deserved it. It wasn’t even close.”

It’s a Border Battle result the ‘Cats will claim with pride. Saturday’s win allowed them to leapfrog the Boston College Eagles in the Hockey East standings to claim the eighth seed. If that holds, the Wildcats will host a playoff game, which bodes well given their 9-4-1 home record.

The Wildcats will return to the Whittemore Center on Feb. 26 to host the Merrimack College Warriors with a 7:00 p.m. puck drop.