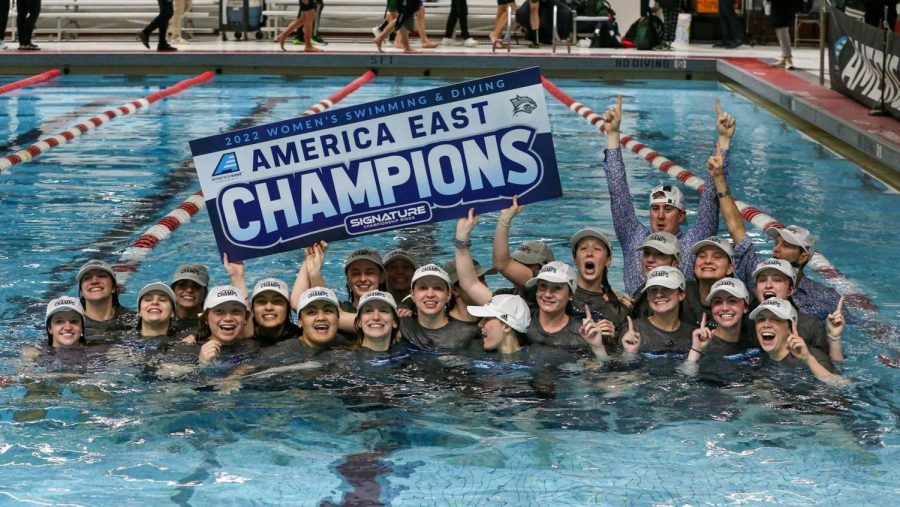 WORCESTER, MASS. – Did someone say Deja Vu? For the third year in a row, the University of New Hampshire (UNH) Wildcats’ swimming and diving team has won the America East Championship.

Not only are the ‘Cats the third team ever to three-peat in the America East, but this one increases their league record of 10 total America East Championships.

Head coach Josh Willman spoke on the victory, “this championship was hard-fought. Going into Sunday morning only four points up we had to really attack our events and get people placed in finals at night,”

UMBC trailed UNH by just four points going into Sunday’s final day of competition, but the Wildcat swimmers showed up when they needed to.

Two swimmers, in particular, made their mark by pushing the ‘Cats over the edge. Junior Olivia Stille and senior Anna Metzler lead the team on Sunday.

Stille acquired a gold medal in the 100-yard freestyle with a time of 50.86 seconds along with contributing to a second-place finish in the 400 free relays in 3 minutes, 25.17 seconds.

Metzler took home her second gold medal of the weekend after placing first in the 200-yard butterfly, coming in at 2:00.96. And as if her weekend couldn’t get any better, she set a new school record in the 200-yard backstroke with a speedy time of 1:56.41.

Similar to Stille, Metzler is also no stranger to America East Championships. In fact, this is her third year in a row coming away with the title.

In previous years she tallied numerous first-place finishes in events such as the 500 free, 400-yard individual medley and the 200 back.

“They really jump-started Sunday night and got the ball rolling in the mile for us to begin creating a lead that couldn’t be surpassed,” Willman said. “The divers really played an integral part in this win, and I am incredibly proud of our team and coaching staff.”

Not only did the swimmers and divers win the title but the coaching staff won one of their own. Willman, assistant coach Mike Jolly and diving coach Cecelia Tarr were named America East Staff of the Year to top it all off.