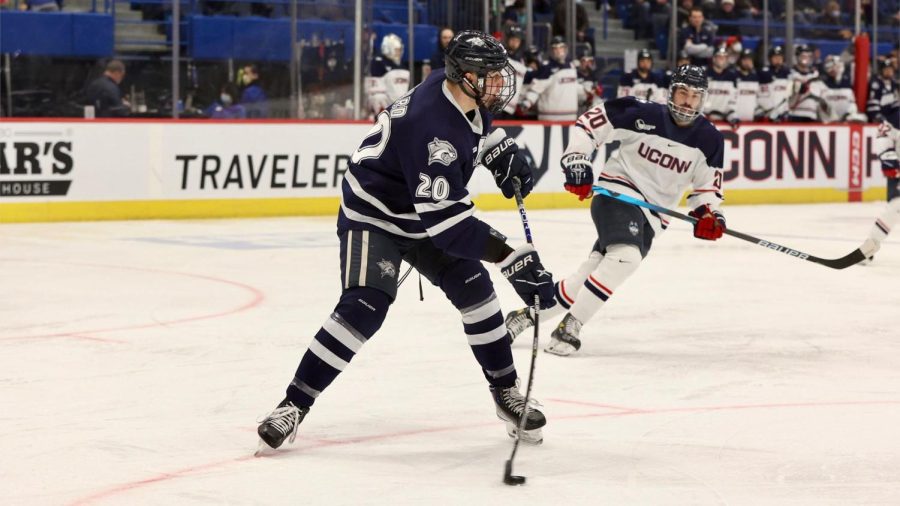 HARTFORD, CONN. — The XL Center belongs to the hounds. At center ice sits the crest of the New York Rangers AHL affiliate, the Hartford Wolfpack. When the Wolfpack aren’t on the ice, the University of Connecticut (UConn) Huskies (10-10-0, 7-6-0) are.

However, the University of New Hampshire (UNH) Wildcats (12-11-1, 6-8-1) took over the rink last weekend, escaping the road series with a four out of a possible six points. All of which help bring them back to the middle in a log-jammed Hockey East.

Friday’s opener was a slow burn. In the first, neither team managed over 10 shots nor found the back of the net. While the second saw both teams double their shot production, drawing first blood proved an elusive feat.

With two minutes left in the second, UConn senior forward Carter Turnbull captured that first goal. And while Turnbull will be credited with the goal first-year defenseman Jake Veilleux deserves just as much credit for his assist.

The Connecticut native beelined toward UNH senior goaltender Mike Robinson once he saw the puck spiral toward the net. Robinson’s pad sent Veilleux’s shot to the backboards, where Veilleux followed. The defenseman passed the puck to the left of the crease onto Turnbulls’s stick, and into the back of the net.

With the ‘Cats on the power play two minutes later, they turned to their own first-year defenseman Colton Huard. With his stick held high, Huard coasted from the point to the bottom of the faceoff circle. After a blocked shot on senior forward Jackson Pierson, the puck found Huard. The defenseman instantly rifled it into the back of the net to tie the game.

Early last week, UNH head coach Mike Souza proclaimed, “He’s got the hardest shot on the team. He can absolutely rope the puck.”

Those words seem almost prophetic now as Huard has scored in four straight games to continue his hot streak.

Heading into the final frame of regulation with the game tied has been a comfort for the ‘Cats all season. Entering Friday, they are 7-1-0 in one-goal games this season.

Their luck continued midway through the third as junior forward Chase Stevenson furthered his own hot streak. After collecting the puck in the slot, Stevenson gathered it onto his stick and stuffed it past UConn graduate student goaltender Darion Hanson to hand UNH the lead.

With three minutes left, UNH put their eighth-ranked penalty kill to the test. The unit proved itself as it has all season killing the penalty to silence the Huskies despite the empty net.

Their kill allowed Stevenson to finish what he started with 20 seconds left. The forward tapped the puck to push it into the undefended net to put the game on ice.

Heading into Saturday’s game, UNH’s five-game winning streak – their longest since the 2017-2018 season – was on the line.

The Wildcats top offensive threats made six straight wins seem possible with nearly three minutes left in the first. Amidst a hurricane of Husky jerseys, Huard found a haven. The defenseman dished the puck from the boards and to Pierson at the left of the faceoff circle. Pierson’s quick hands hammered the puck past Hanson for his team-leading 11th goal.

Down by one, the Huskies turned to one of their own top offensive threats, senior Marc Gatcomb. The forward fired the puck from the point through heavy traffic and Robinson to put the Huskies on the board.

Gatcomb tallied an assist roughly ten minutes later. The senior rocketed a shot from a point that ricocheted off Robinson’s pads and onto the open ice. First-year forward Sasha Teleguine pounced on the puck and backhanded it past Robinson for his first career goal.

Despite being outshot 19-8 in the third, the Wildcats made the most of their opportunities. Senior forward Filip Engarås played the puck off the boards to beat Hanson and tie the game with six minutes remaining.

Engarås’ late goal was the last of regulation, sending the game to extras. Overtime has not been a foreign beast to the Wildcats, going into Saturday, they were 3-1-1 in overtime through five games.

When UNH’s stars could not finish the game, UConn looked toward their star of yesteryear, senior forward Jonny Evans. In 23 games last season, Evans totaled 29 points. This season Evans has totaled just seven points in 17 games. But in OT, Evans reminded the world of his old self.

The forward pivoted from the point and pedaled to the left of Robinson’s net while keeping his forehand open. Graduate student Kevin O’Neil spotted Evans and zipped the puck to him. The defender toyed with the biscuit before he bypassed Robinson’s four-hole to win the game and snap the Wildcats winning streak.

“I thought we got outplayed,” Souza told the Union Leader. “I thought [UConn] took it to us most of the game. We kind of just survived because we got outstanding goaltending.”

The loss will overshadow a terrific performance by Robinson, who made a season-high 37 saves to keep UNH in the game despite their lackluster offense.

“It’s always tough to lose but I’m proud of our team,” Souza said. “We were a shot away and we didn’t have our best [on Saturday]. We were fortunate to get the game to overtime. The points are all going to matter at the end of the year.”

UNH will have to wait two weeks for revenge as they return to the ice next on Feb. 4 for a home game with Merrimack College (12-10-1, 7-8-0) before they host UConn to determine the winner of the season series.