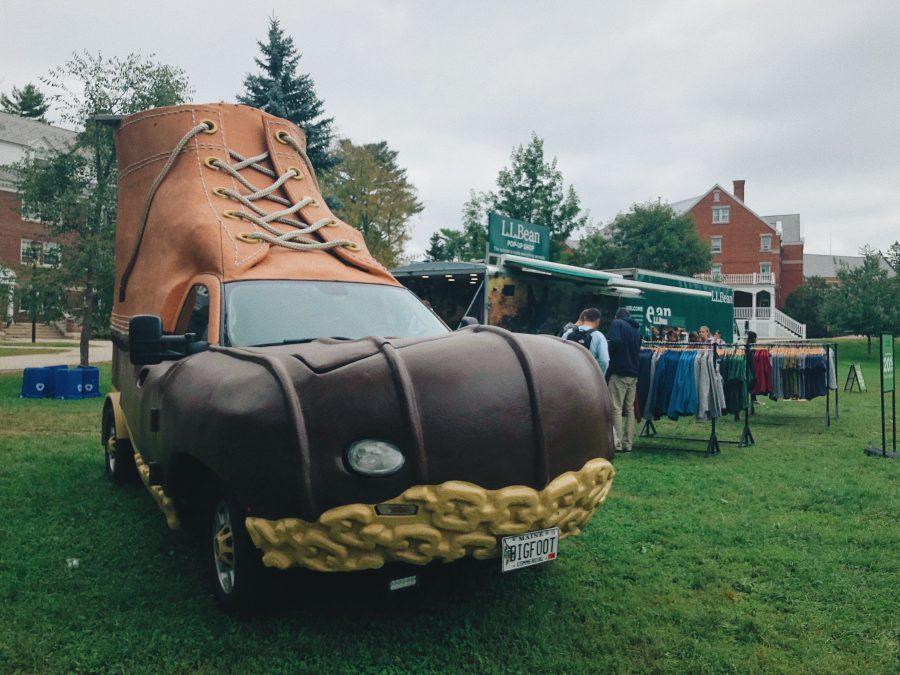 Family-owned retail chain L.L. Bean brought its signature outdoor spirit to the University of New Hampshire (UNH) on Wednesday, Sept. 19, as it arrived with a pop-up store, afternoon entertainment, football and the iconic Bootmobile.
Throughout the day, the company’s miniature store, located in the “Fishbowl” in front of Scott Hall, showcased the usual merchandise one would typically find in a fully-fledged store, such as store-branded shirts, raincoats, sweatshirts and boots. Unlike a typical store, however, the pop-up store also offered services such as custom-colored boot laces for L.L.Bean and third-party footwear, as well as photo-ops with the Bootmobile, a 20 percent off student discount and a raffle offering a $300 gift card as a prize, according to Lindsay Brooks, a experiential marketing specialist for the company.
“Our goal is to spread brand awareness in the college campuses,” Brooks said. “We have some student ambassadors that are representing L.L. Bean on campus throughout the year, so we want to support them and also bring that L.L. Bean ‘be an outsider’ fun on [the] UNH campus.”
Brooks explained their student ambassadors, acting as company representatives, were tasked with spreading information about the pop-up store and L.L. Bean as a whole, handing out coupons, giveaways and general information in the process, all in order to, per Brooks, “spread the L.L. Bean love here too.”
Other opportunities offered by the company included a cornhole game early in the day and a chance in the afternoon to meet the “L.L. Bear” mascot, who competed against UNH mascot Wild. E. Cat in a game of Jenga.
At 4:00 p.m., a special “Flannel Football” game was held between UNH’s Woodsmen Club and Outing Club, with a final score of 30-20 in favor of the Outing Club.
Senior hospitality management major Tristan Mellynchuk, who served as the Outing Club’s quarterback, praised his team’s “great comradery” and “good energy,” while his teammate Michael Stringham, a senior health and physical education major, said it “was awesome today playing [against] the Lumberjack team” and thanked L.L. Bean for making the event possible.


“It was great to be a part of it,” junior chemical engineering major Cody Paquette, who took on the role of quarterback of the Woodsmen’s team, said. “Both teams played hard, we were having a fun time today.”
“It’s always very exciting for us to come to UNH because we have a lot of folks that have grown up with L.L. Bean, being in the New England area,” Brooks said concerning L.L. Bean’s purpose in visiting Wednesday. “So it’s exciting to have students that know L.L. Bean already and also the chance to introduce L.L. Bean to new students.”
The company’s visit to UNH, according to Brooks, marks its third in its current fall college tour of New England campuses, having already visited the University of Rochester and University of Buffalo, both in New York. Upcoming locations on the tour include the University of Maine in Orono and Western New England University in Springfield, MA.
Delete Image
Align Left
Align Center
Align Right
Align Left
Align Center
Delete Heading