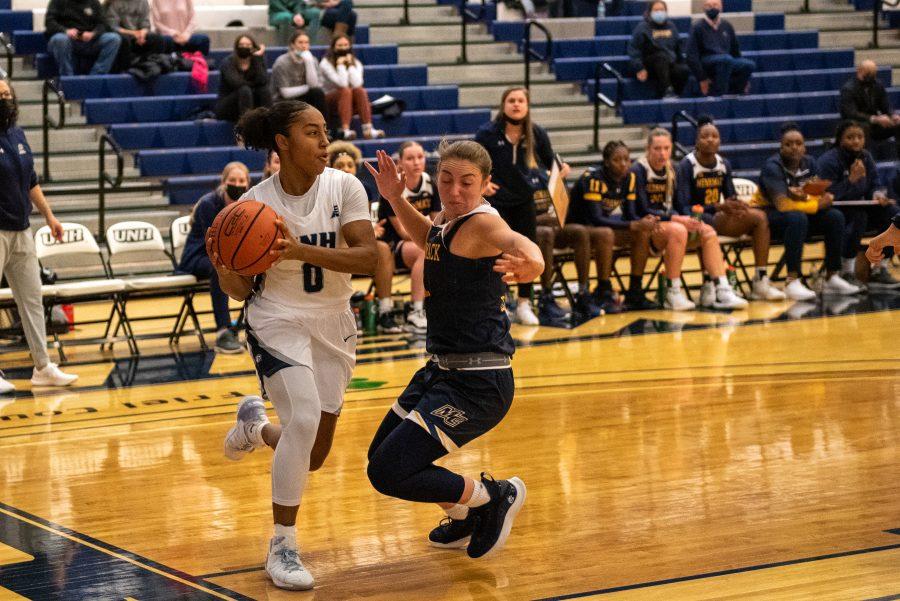 A 15-point comeback to force overtime wasn’t good enough for the University of New Hampshire (UNH) Wildcats (3-7) Wednesday afternoon versus the Merrimack College Warriors (4-6). A gritty effort ended in defeat for a UNH team that has struggled to put the pieces together as of late.

There are the three key takeaways from the team’s fifth straight loss ahead of their conference schedule.

The ‘Cats have fight, but that might not be enough.

Merrimack was well on their way to an easy victory in this one. They controlled the game in the first half and limited UNH’s stars. They held a lead of 15 at one point and entered halftime up 12. UNH only got two points from their starters in the first quarter. The Warriors had this game won — until they didn’t.

UNH came out of halftime like a ‘Cat out of hell. They outscored the visitors 22-16 in the third quarter and 16-10 in the fourth. Big shots and defensive plays came together, and senior point guard Amanda Torres was cool as ice with a layup to tie the game with 11 seconds to play. The comeback was everything head coach Kelsey Hogan has wanted from her team. Gritty and scrappy with no thought of surrender.

But then came overtime. The Wildcats’ energy lagged. The team looked drained from the exertion needed to climb back into the game. Merrimack played fast all game and in the extra period, the heavy legs of UNH couldn’t carry them fast enough to keep up.

The loss is enigmatic of where this team is. They will fight, claw and will their way through games. But rarely will they play a complete 40 minutes. Players will have hot quarters or halves, but sustained performance eludes them. The effort is always there but sports is a results-based business, and the results just aren’t there right now. Five losses in a row, three of which came at home. This team has bought in but right now the best they can do is go down swinging.

Delaruelle and Davis go off for a combined 26.

Junior Helena Delaruelle and first-year forward Talia Davis each had the best game of their season so far. Davis exploded off the bench with 12 points and six rebounds. She played for just 25 minutes. Davis and the rest of the bench kept UNH alive in this one for much of the first half. The starters only mustered a meager two points in the first quarter. The bench had nine with Davis supplying four.

Delaruelle is a player that has been on the precipice of joining Torres at the upper echelon of this team. The native of France has all the tangible skills and plays with a great combination of fire and swagger. But the statistical success remains elusive. The guard hadn’t entered double digits in scoring before Wednesday. She remains inconsistent in the assist column. But every now and then, Delaruelle can be the best player on the court. Her success from behind the arc is often the indicator for what type of game she’ll have. Wednesday, the guard hit three in a row from deep. Delaruelle finished with 14 and was instrumental in the second-half comeback. Torres finished with 11 points. The ceiling will rise considerably for New Hampshire this year if the two starting guards can consistently combine for at least 20 points. Torres is surely this team’s Batman, but Delaruelle needs to solidify her role as Robin.

Conference play will test this team, but it’s also an opportunity.

A five-game skid has sent the Wildcats into their first America East Conference game with a 3-7 record. Not ideal, but conference play is for all the marbles. These recent losses will soon be forgotten if UNH can string some wins together versus their conference rivals. The ‘Cats have a week off before taking on UMass Lowell (3-6). If Hogan can learn from this game, make some tweaks, tighten a few screws and have the ‘Cats rested and reloaded, then who knows. Maybe all that grit will begin to pay dividends.