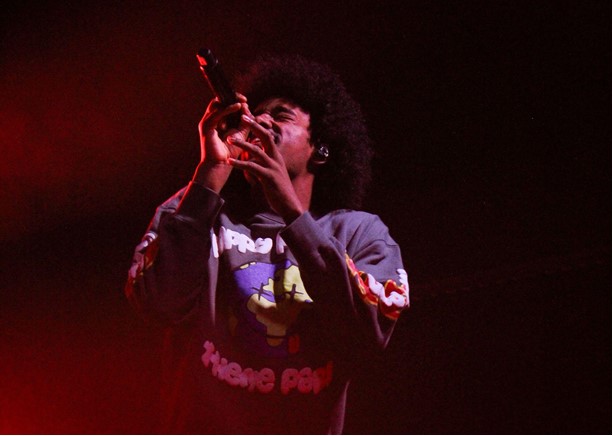 [DURHAM, NH]– By 7 p.m. on Thursday Dec. 9, the Granite State Room (GSR) at the University of New Hampshire (UNH) was filled to a capacity of a little over 400 people, some waiting to see live music for the first time since the start of the Covid-19 pandemic.

The Student Committee on Popular Entertainment (SCOPE) was able to pull off this event despite university Covid-19 restrictions. All 27 members had been working since May to host some form of live entertainment for UNH. With a sign-off from UNH President James Dean, SCOPE members worked quickly to contact the artist and TikTok star, Tai Verdes, and sold out tickets within three to four hours.

Some students were in line for the show an hour early, sitting on the floor outside the GSR. Liam Brown,  a first-year student, was first in line for the show. He had been following Verdes on TikTok since he started producing music. Fortunately, Brown has been able to see other stars like Weezer, Luke Bryan, and Green Day, but he had been looking forward to seeing Verdes the most. Also in line was Ben Myer, a sophomore, who said Verdes is, “the greatest- the greatest of all time.”

SCOPE had secured a full-concert set up: barricades, fog machines, lighting equipment, sound checks and worked side by side with the Event Production Company. Last-minute they even asked BLANCO to be Verdes’ opener: a five-man band local to the Durham area. It was their first time opening for someone at the kind of caliber of Verdes.

BLANCO performed their well-known “Smilin’,” “I Wanna Die in Hawaii” and “You Get Me So High,” amongst a variety of their top hits. Lead Singer, Ryan Farinas, brings a bright energy to the stage from beginning to end. He’s raw in his performance and storytelling.

Drummer, Shane Jozitis, said there was an unspoken feeling of anxiety the band felt before going on stage. It was the biggest show they’ve ever performed at. From the size of the stage, amount of people in the audience to the audio equipment and five or more photographers, Jozitis couldn’t help but feel a pit in his stomach. However, “it was such a surreal moment. Once I planted myself on the drum throne, all my emotions washed away and my muscle memory kicked in,” Jozitis said.

BLANCO comes full-circle with a solo from saxophonist, Matt Oriente, solid guitar rips from Seamus Connelly and a whole lot of bass from Kai Dimuzio.

The star of the show, Verdes, then entered the stage right at 9 p.m., and the crowd went wild. He was accompanied by his guitarists Edison Lo and Jacob Evergreen.

“Tai is the most down-to-earth dude. He was so welcoming and warm,” Jozitis said after he was able to meet him.

Verdes brought energy to UNH that wasn’t seen since pre-COVID. His bright smile and ability to get the crowd roaring was electric.

“A-O-K,” “DRUGS,” “FEELING THIS BAD NEVER FELT SO GREAT,” were just a few bangers Verdes brought forward. By 10 p.m. Verdes wrapped up his show and the audience trickled out the GSR for the next 20 minutes.

Harrison Flagg, a senior and member of SCOPE’s business department said making the show happen was one of the most exhilarating feelings. However, they did have some bumps in the road. Flagg reflected on how difficult it was to plan the concert- from university approval to Covid-19 restrictions- it was far from easy.

“SCOPE has had a lot of letdowns that no one really knows about, and I wish we could have made those dreams come true, but the fact that we’re doing anything tonight just literally makes me the happiest person in the world,” Flagg said.

He also gave props to SCOPE as a whole, saying “this group is such a strong group when it comes to their perseverance and their ability to get through the difficult times with this stuff.”

The production director of SCOPE, senior Madison Cooper, said the past week they were working 10 hour days between communication and production work.

“The students deserve something,” Cooper said while agreeing that those long days were worth it.

The spring is looking hopeful show-wise, according to Flagg and Cooper. They’re hoping for a bigger venue and for Covid-19 cases to go down in general. But, they do add that SCOPE’s decisions are being made by ear. “We’re planning a show around possibility. Nothing is set in stone,” Flagg said.

Thanks to SCOPE, Verdes and BLANCO were able to gift UNH students with memories of a lifetime. Like Flagg said, “music is one of the most powerful things we can offer to anyone.”

Contributing Writer Emma Kostyun contributed to the reporting of this story.