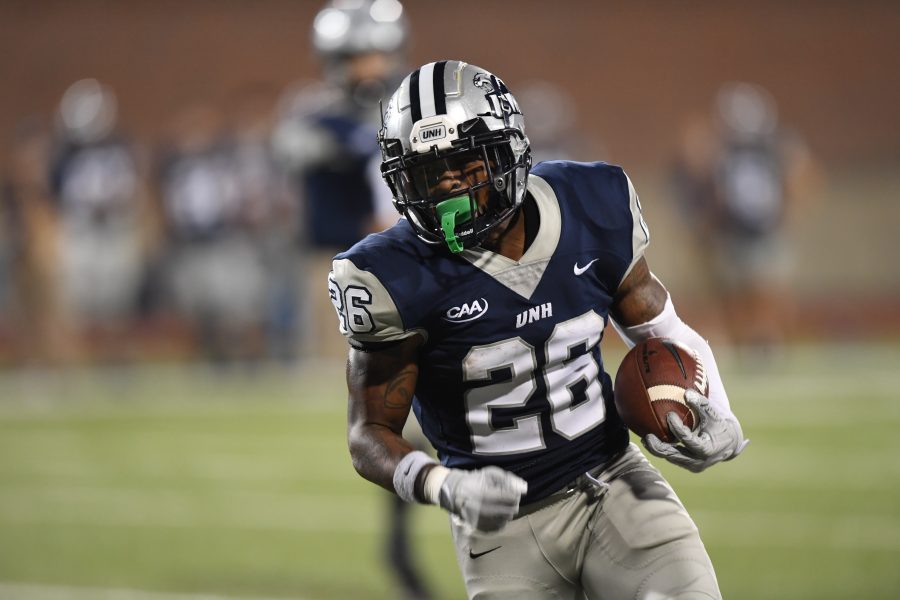 DURHAM, N.H. – Junior running back Carlos Washington Jr. announced on Monday morning that he has entered the transfer portal for his final season of eligibility following his graduation in December. Washington Jr. says his recruitment is “100% open,” according to the tweet he sent out captioned, “Wildcat Forever..”

The running back was one of just a few bright spots for the University of New Hampshire (UNH) this season after stumbling to a 3-8 record. Just days after former head coach Sean McDonnell announced his retirement, Washington Jr. also took a moment to reflect on his time in Durham via Twitter.

“I am beyond thankful for the time and experiences I’ve had here at UNH,” wrote Washington Jr. “I would like to personally thank Coach Mac for believing in me, and helping me grow as a man on and off the field. He has given me the opportunity to excel in D1 ball within the CAA and its truly something I’ll never forget. I would also like to send my appreciation to the UNH coaching staff, trainers, and fellow athletic staff members who contributed to my overall well being. To my family, I cannot express my gratitude enough for continuously sticking beside me. You all’s love and support is what keeps me going. I’ve built life long relationships with my brothers here at UNH and I appreciate the UNH community for embracing a kid from PG County, Maryland. I would like to announce that I will be entering the transfer portal as a grad transfer with 1 year of eligibility upon my graduation in December. My recruitment is 100% open. Excited to see what God has in store for me as I enter a new chapter and continue to write my story. #LLF”

Washington Jr. rushed for 547 yards and one touchdown this season while also racking up 137 yards through the air along with another score. The junior ranked second on the Wildcats in all-purpose yards with 683, trailing only sophomore Dylan Laube.

Through three seasons in Durham, Washington Jr. accumulated 1,720 rushing yards, 460 receiving yards and 12 total touchdowns. Although this loss is a big one, the UNH running backs are perhaps the group most well-equipped to take this big of a hit. The team will now turn to Laube as the lead back who had 707 yards of total offense in 2021 to go along with five touchdowns. Laube is one of the most explosive players in the conference on the offensive side of the ball as he had three touchdowns of at least 47 yards in 2021. Alongside Laube will now be redshirt first-year runner Isaac Seide. Seide rushed for 182 yards on 36 attempts this season and excelled when used as the feature back. On Oct. 30 against Richmond, he rushed for 75 yards and a score. His downhill running style is reminiscent of former UNH back Evan Gray.

Junior wide receiver C.J. Turner also announced his entry into the transfer portal on Monday. The wideout cashed in on eight receptions for 101 yards in 2021. He will graduate in May and also have one year of eligibility remaining.