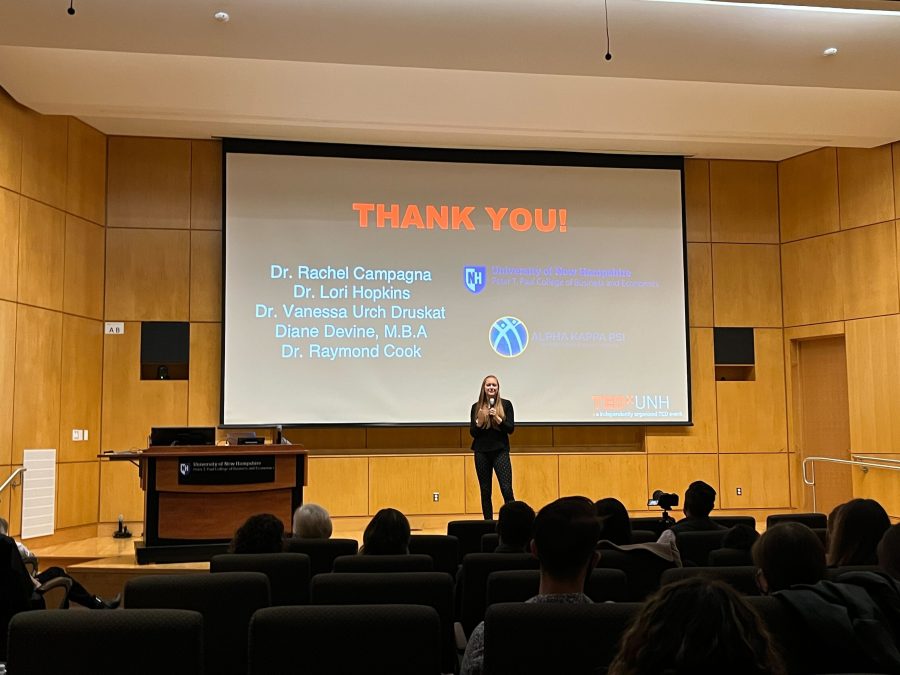 On Nov. 18, the University of New Hampshire (UNH) featured five faculty speakers in its first-ever TEDxUNH event. The independently organized lecture series, licensed by TED, was sponsored by the co-ed business fraternity Alpha Kappa Psi (AKPsi). It was attended by about 133 people in-person and on Zoom.

“Since our organization is open to all majors, we wanted to host an event that could bring together the different disciplines of our organization and the University,” said Sarah Wilkinson, event organizer and AKPsi master of rituals. She also feels bringing together the community is even more important due to the isolation caused by the COVID-19 pandemic.

“I think there are a lot of faculty members who do awesome research or work that isn’t always shared, this is our way to highlight what they are doing beyond the classroom,” Wilkinson said.

Campagna was the first speaker of the night, presenting “When Negotiating, Keep Calm and Let Them be Angry.” The talk covered the most effective ways to manage anger during a negotiating process. Campagna explained that “anger is contagious” so when one party in a deal becomes angry, the emotion quickly infects the other person until negotiations break down. The best strategy is to remain calm, and because people are more likely to reveal things when emotions are high, extract useful information.

“They’re giving you the gift of information. You can use this information in order to integrate it with your own interests and make a better deal for yourself,” said Campagna. She explained that when someone’s emotions feel validated it can build trust and lead to successful negotiations in the future.

Hopkins’ presented “Why Listening to (An)Other Culture in (An)Other Language Matters” to explain the benefits of multilingualism. Due to the pandemic, there was a rise in the making and consumption of art which included learning different languages. The popular language-learning app Duolingo saw a 300% increase in sales in 2020. While multilingualism does have benefits such as increased creativity, memory and critical thinking skills Hopkins explained that it also helps individuals widen their perspectives.

The third lecture, “How a Culture of Belonging Motivates Collaboration and Teamwork” was presented by Urch Druskat. She discussed how it is not an individual’s skill set, but rather how those individuals interact with each other, that determines the effectiveness of a team.

This is why a culture of belonging is invaluable to an effective workplace as people who are treated well by their peers are more likely to share ideas and collaborate.

Devine’s lecture, “Change Your Lens. 3 Lenses to Change for a More Diverse and Equitable Future,” covered the effects of gender stereotyping, racial bias and objectification in media and its influence on consumers. She also discussed how individuals that consume problematic content are more likely to perpetuate those biases in their own social media.

“We need to think about [what we put on social media]. We need to consider our lenses and how we can change those lenses for the better,” said Devine.

The final bonus talk, which was prefaced as not being a TEDx-recognized talk, “The Immeasurable Impact of UNH on the World,” was presented by Cook to highlight the work of multiple UNH alumni – from helping to build suspension bridges in California to proofing roads against climate change in Alaska.

“[UNH graduates] had a tremendous impact on the world,” said Cook. “They’re having that impact now as we sit here in this room, and they all shared a path across the front lawn of T-Hall.”