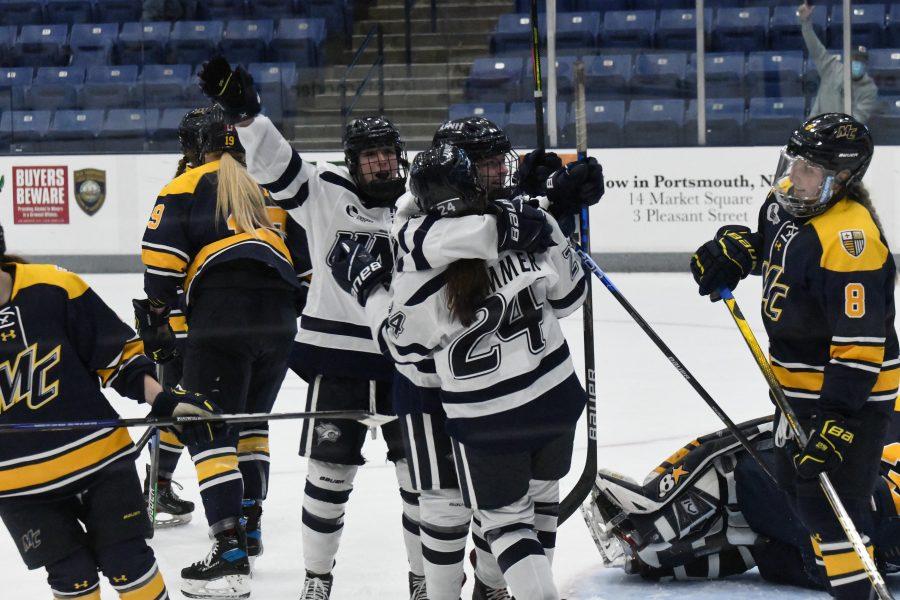 The University of New Hampshire (UNH) Wildcats (3-6-2, 3-6-1) and the Merrimack College Warriors (4-9-1, 4-5-1) each got themselves a win in the home-and-home series over the weekend. Each side found a way to win on their respective home ices as they continue to try and catch up to the pack in the Hockey East.

Game one started off with an even first period. Each team put up seven shots on goal and none were successful.

The ‘Cats took control of the game in the second period. Not only did they outshoot Merrimack 15-5, but they bumped the score up to 2-0 by the end of the period.

The Wildcats’ first goal was scored by junior forward Jada Christian in the 13th minute of the period. She was assisted by senior defender Maddie Truax and sophomore defender Brianna Legros.

Just three minutes later, UNH managed to carry their momentum to strengthen their lead to two goals. That goal was netted by senior forward Lindsey Dumond. She was assisted by first-year forward Brooke Hammer and sophomore forward Ciara Wall.

The story of the game was how the Warriors took complete control from that point on. The Wildcats failed to find the back of the net again before Merrimack came storming back.

In the first 10 minutes of the third period Merrimack tied it up with ease as they scored two goals less than a minute apart. The first one was scored in the sixth minute of the period by first-year forward Alexa Pongo. This was off a power play which is a rarity for the Wildcats as they had only allowed six power play goals to that point in the season.

The Warriors second goal that sent the game to overtime was scored by sophomore defender Raice Szott in the seventh minute.

Even though there were no more goals in the third period, senior goaltender Ava Boutilier stopped five different Warrior shots throughout the rest of regulation.

Merrimack wasted no time once the overtime period began. They got the win just 17 seconds later when graduate student Courtney Maud put Friday’s game to rest with a wrist shot that nestled right below the crossbar.

The next afternoon the Wildcats honoured UNH alumni and three-time Olympian Kacey Bellamy before their game. The ‘Cats did not disappoint this time around as they played with much more fight winning the game by a score of 2-1.

Merrimack’s lone goal of the day was scored in the 10th minute of the first period. The goal was put right between the legs of Boutilier by sophomore forward Emily Oosterveld.

The ‘Cats responded four minutes later with just 15 seconds remaining in their power-play. Hammer found the back of the net in the 16th minute to knot the score at 1-1.

The second period saw one unsuccessful power-play for each team. The Wildcats outshot the Warriors 13-5 throughout the scoreless period.

UNH finally converted a shot into a goal to take the lead in the fifth minute of the third period. Senior forward Lauren Martin scored the game winning goal with a slapshot.

The Wildcat defense held up the remainder of the game and did not allow a single shot on goal once the Warriors pulled their goalie with 55 seconds remaining.

This effort gave UNH their third win of the season and they will look to push that number higher in a tough Hockey East matchup this Friday, Nov. 19 when they travel to Northeastern (10-2-1, 9-2-1).