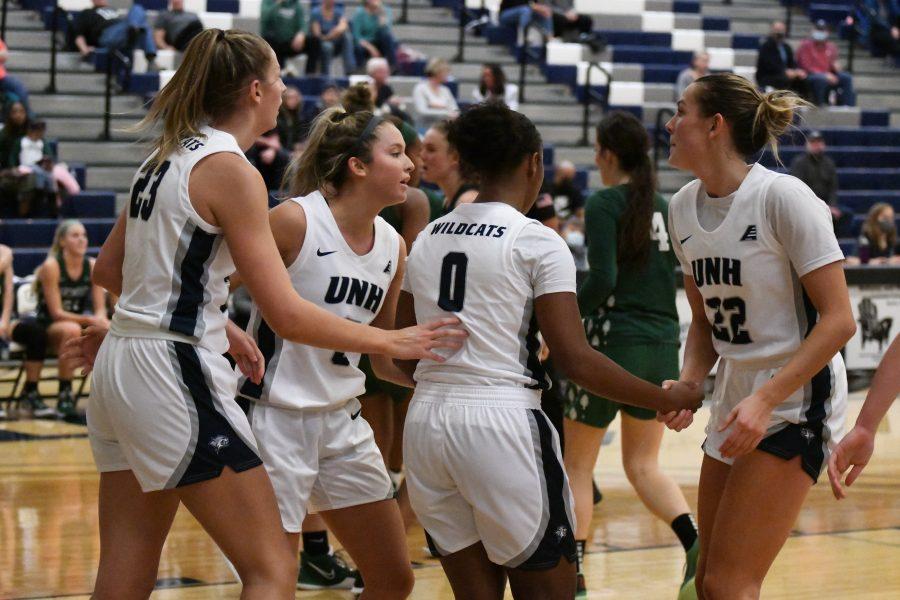 ACDC’s “Thunderstruck” echoed around Lundholm Gym as UNH prepared to take on the Dartmouth Big Green in their first home game of the season. Thunder did not equate to lightning early on. Both teams struggled to score in the opening minutes. High energy defense and inconsistent shooting kept both offenses from coming alive.

Dartmouth’s man-to-man defense flustered the ‘Cats early, but once UNH settled down and found a rhythm, the offense became a smoother operation. As the first quarter wrapped up, UNH pulled ahead 15-10 thanks to a mid-range jumper and two made free throws from star captain Amanda Torres. The four points were the fifth-year point guard’s first of the quarter. Torres finished with 13 points on the day, equaling her mark from Iowa.

Dartmouth went heavy volume from behind the arc, and it started paying dividends in the opening stages of the second quarter. Two makes in a row tied the game at 16 and shifted momentum in favor of the visitors. The Wildcats zone had been strong until then, but the shift to outside shooting exposed its weakness.

As quickly as Dartmouth’s hot hand arrived, it departed. The Wildcats adjusted to the outside threat and kept Dartmouth off the scoreboard for over four minutes. Meanwhile, Torres and the ‘Cats found a groove and muscled their way to a 17-point quarter.

Halftime left Dartmouth looking up at a 32-20 deficit. UNH’s size inside helped dominate the paint and a 21-16 rebound advantage at the half. The precipitous fall of Dartmouth’s shooting percentage didn’t hurt the ‘Cats either. The Big Green shot 36% from the field in quarter one. That mark cascaded to 15% in the second.

Dartmouth opened the second half with a press that disrupted the Wildcats and helped keep the Big Green’s hopes of a comeback alive. The change clearly rattled UNH. Torres was often doubled at half court and forced to make an early pass. Dartmouth consistently got hands on the ball, and UNH had to work hard for every shot.

All that work never paid off for Dartmouth. The Big Green poured energy into the press but were exposed once the ‘Cats pushed the ball over half. Senior Ivy Gogolin made several back door cuts for open layups. Her eight points in the third quarter helped UNH to a 46-34 lead. She finished with 13, tying Torres for a team high.

“That’s what Ivy does,” said head coach Kelsey Hogan. “She’s one of our hardest workers that we have on the team. She was sort of feeling out the game in the first half, and you can always count on her in the second half.”

The fourth quarter felt comfortable for UNH as Dartmouth’s offense sputtered and failed to make a final push. UNH could have pulled further away had their shooting not dwindled to 14% in the quarter. But with Dartmouth only managing 12 points, the ‘Cats were content with 12 points of their own and a 58-46 final score.

The game was comfortable toward the end, but UNH wasn’t without their struggles. Apart from Torres, who finished with 11-12 on free throws, UNH struggled from the stripe shooting just 6-for-15. In a closer game that kind of shooting can haunt you. Luckily for UNH, Torres will be there to lift that percentage.