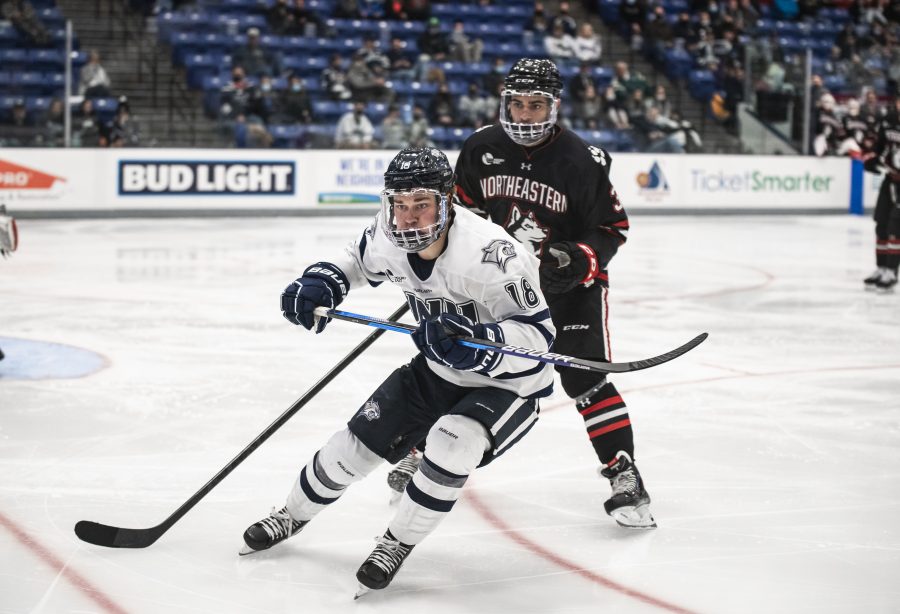 The road didn’t get any easier for the University of New Hampshire (UNH) Wildcats (3-6-0, 1-4-0) as they faced a strong unranked Northeastern (8-3-0, 4-2-0) squad this past weekend in a home-and-home Hockey East series. UNH dropped both games by a score of 4-1 as the offense continued to struggle.

On Friday junior David Fessenden got the start again in net for the Wildcats, after a phenomenal performance the previous Saturday against Providence that earned the Wildcats their first Hockey East victory of the season. Fessenden and the Wildcats jumped out to a strong start in the first period, shutting the Huskies down defensively as Fessenden was able to stop all four shots that were thrown at him in the period.

Offensively the ‘Cats also got off to a strong start, scoring in the second minute of the game off a beautiful goal from first-year defenseman Colton Huard. This was Huard’s first career goal in only his second game. The rookie has done a good job stepping up for the injured defensemen that have gone down for UNH. On the goal first-year forward Will Margel was credited with an assist, which was his first collegiate point.

The rest of the night for the Wildcats was nothing to write home about, as they were overmatched by the Huskies. New Hampshire allowed two goals in both the second and the third period en route to a 4-1 final.

“I thought our execution tonight was poor in a few areas but credit to Northeastern, I thought they defended well,” UNH head coach Mike Souza said after Friday’s game. “They played 60 minutes and we didn’t.”

New Hampshire’s senior assistant captain Eric MacAdams also commented on the team’s play after the game saying they “haven’t had much success lately offensively, but it’s going to come. We’re getting some shots through; we just need to bear down on second and third chances around the net. As coach says, we need to be shovelers not shooters, so we need to bear down.”

Fessenden registered 18 saves on the night and Northeastern’s sophomore goaltender Devon Levi recorded 19. The Wildcats went 0-for-3 on the power play, however, improved their penalty kill rate to .926, which is second in Hockey East behind only Northeastern.

On Saturday the story was much the same for the Wildcats as they fell to the Huskies by a score of 4-1 once again.

Senior Mike Robinson made his return to the net for UNH, finishing with an identical stat line to Fessenden the night before, stopping 18 shots and while allowing four.

The Wildcats offense came out firing in the opening frame, registering 14 shots on Levi, but were unable to get one by him. New Hampshire kept the shots coming the rest of the way as they outshot Northeastern 35-22 through all three periods. Five of those shots came on the power play, where the Wildcats had plenty of opportunities to convert but ultimately finished 0-for-7 on the night.

Liam Devlin scored the only goal for the Wildcats which came in the third period. The netfinder was Devlin’s second of the season which ties him for the team lead.

This past week during Souza’s media availability, he provided an update on the status of senior captain Will MacKinnon, as well as senior defenseman Ryan Verrier. Souza expects MacKinnon to be out through at least the team’s winter break, which would put a hopeful return date around the turn of the year. As for Verrier, Souza said he expects him to be out for possibly a month, which could mean a return at the end of this month or against Boston University during the last series before the winter break. Losing both of these seniors has been killer blows to the team, especially given the amount of time they will miss. New Hampshire will be forced to roll with the punches for the next few weeks until the pairing can return to action.

For the Wildcats, the struggle on offense has been real these past seven games since their opening series sweep against Union. During that span, the team has scored only seven goals, including just six in regulation. In fact, the team has scored as many goals these past seven games as they did in the opening series against Union.

The team is still searching for their first road win after they dropped the game on Saturday, moving their record away from the Whittemore Center to 0-4-0. On the road this year UNH has been outscored 20-4, a figure that will need to improve if they want to find their first win in that category.

Thankfully for the New Hampshire, there will be no road games this weekend as they take on a struggling Vermont (UVM) Catamounts (1-5-0, 1-1-0) team twice this weekend at the Whitt. UVM is tied with UNH in Hockey East standings with two points, so this will be a crucial series against a team that has also gotten off to a slow start. The Wildcats will hit the ice at 7 p.m. on both Friday and Saturday, in what will be an important weekend to get the team back in contention.