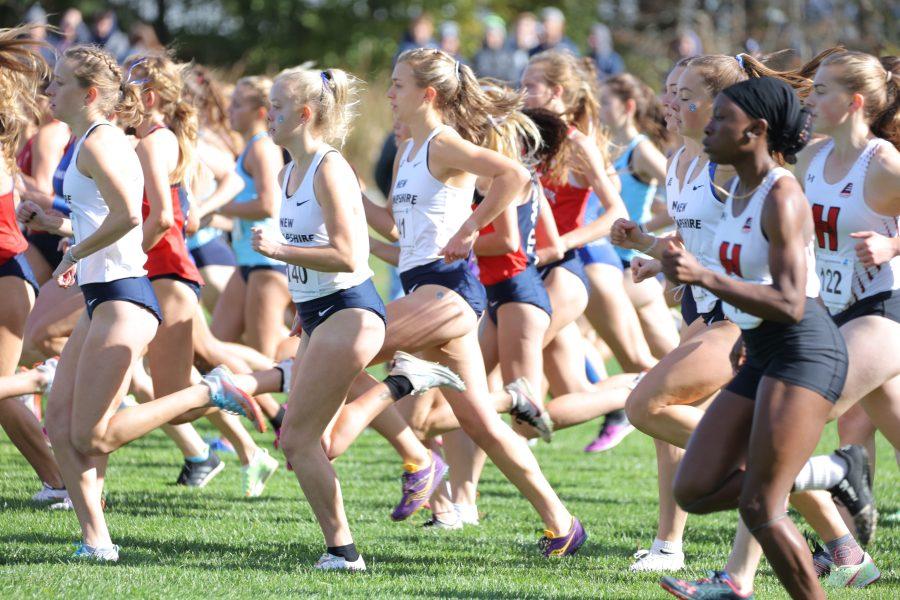 DURHAM, N.H. – The University of New Hampshire (UNH) Wildcats hosted the men’s and women’s America East Championships two weekends ago in College Woods. On a sunny autumn day, the Wildcats competed against nine opposing schools in the final race before the NCAA Regional Championships. After finishing dead last in two of their first three races, the men’s team found improvement with a fifth-place finish in this one. On the women’s side, a valiant effort pits them a second-place finish in their race.

UNH hosted it’s second meet of the season and head coach Robert Hoppler acknowledged the speed of the course on the fall afternoon.

“The course was a highlight of the meet,” explained Hoppler. “It was absolutely lightning fast.”

The grounds staff and facilities workers were once again complimented by Coach Hoppler for this year’s rendition of the conference championship. It’s no surprise that teams have great things to say when they visit Durham for a race in the fall.

The star of the show for the wildcats was first-year runner Jill Walker. The California native finished in eighth place with a final time of 17:06.52.

When asked about her performance, she responded with a team-first mentality.

The women represented the Wildcats well with five finishers in the top-16, resulting in a second-place finish on their home course.

On the men’s side, junior Aidan O’Hern led the group with a 21st-place finish and a time of 24:59.76, good for his fastest finish in an 8K race this season.

“Aidan’s improved tremendously over his time at UNH,” said Hoppler. He went on to mentioned that Aidan had never broke 26 minutes before this season.

The sophomore standout received America East Performer of the Week honors the week prior to the meet, setting him up for a pressure-packed race. He came through, breaking his goal time of 25 minutes by a fraction of a second.

Overall, the men had a solid showing, scoring 150 points as a result of their top-five runners all finishing within the top-38. The other key contributors included sophomore Jeffrey Allen, first-year athlete Aidan Shea, junior Kenney McElroy and junior Will Curran.

It was a successful Conference Championship put on by the Wildcats and a proud effort from both sides. Next up for the team is the Northeast Regional Championship in Boston. Should either group finish in the top-two in their respective competitions, they will receive an automatic qualifier to the National Championships in Tallahassee, Fla.