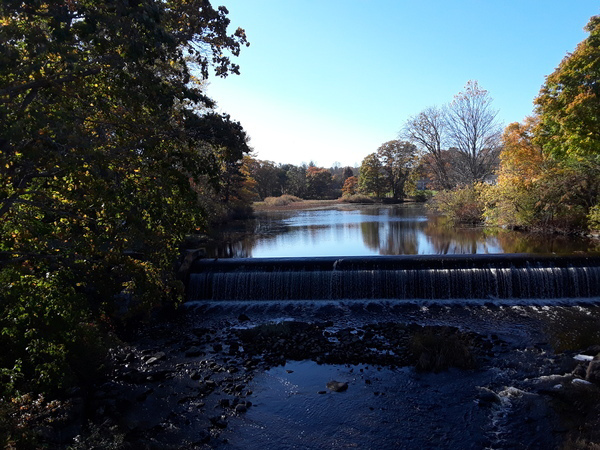 Durham residents will soon have to decide whether or not they want to remove the Mill Pond Dam. Residents will have to mull over the environmental, economic and social consequences of either choice.

The Mill Pond Dam was built over a hundred years ago but dams have occupied the spot since the 1600s. After a vote by the Durham Town Council to remove the dam when?, it looked like it would be demolished. However, more than the required 750 signatures opposing the removal have been obtained, triggering a referendum.

The dam has been deemed deficient by the New Hampshire Department of Environmental Services so something must be done either way. The only question is repair or removal.

The arguments for removal hinge on the environmental and fiscal benefits. According to an article by the Foster’s Daily Democrat, Council Chair Kitty Marple has said the dam would cost an estimated 1.5 million to repair and 1.9 million to remove.

However both sides of the argument disagree on the environmental impact of removal.

Melissa Paly is the Conservation Law Foundation’s Great Bay–Piscataqua Waterkeeper. Her job to advocate for the protection of the seacoast waterways. Paly believes dam removal is a good idea both environmentally and fiscally, referring to the ongoing cost of maintaining a dam. She also said removing the dam would be in the best interest of the Great Bay Estuary.

Paly added that this isn’t a new problem. “This hasn’t just become an issue, it’s been simmering for years,” she said.

However, some Durham residents disagree that dam removal will create a free-flowing river or be beneficial to local species. Larry Harris is a former professor of zoology at the University of New Hampshire (UNH) and lives near the dam. Among other reasons for keeping the dam, Harris thinks a separate dam causes more of an issue. “If you want a free running river you need to take out the UNH dam and nobody is going to do that,” said Harris.

Water quality is another issue.

Paly said currently the Oyster River is impaired. She pointed to the Department of Environmental Services classification that deems the water quality poor. Paly said the dam is a contributing factor in causing this poor water quality. The dam traps sediment resulting in a warmer, shallower pond with decreased oxygen levels. “Oxygen is very important in water bodies because it’s what fish and other things need to survive,” said Paly. This becomes a problem during the summer when temperatures are high.

But there are also concerns about the negative environmental impacts of removing the dam. Diane Freedman is a retired UNH professor, who lives near Mill Pond. She is concerned about what will happen to the animals living in the pond. Freedman said the area is home to 119 species including 13 fish species. Harris said removal of the dam would lower the water level thus taking away the habitat of these animals.

Oyster River High School Science teacher and Durham resident Jon Bromley comes down on the side of dam removal and argues that while some populations may decrease others will increase. “Would you see a turnover in populations? Probably. But you would also see a return and enhancement of ecosystems that will support additional wildlife,” said Bromley.

Bromley hopes to promote Blueback Herring, which he said are a more sensitive species rather than fish like bass, that currently reside in the pond.

Freedman is also critical of the town of Durham’s stewardship of the pond. She said they have not taken care of the pond properly through the years. “There are many parties that should take shared responsibility for the health of the whole watershed and specifically this area,” said Freedman.

However, there is more to the debate than just environmental concerns. Some point to the dam’s historical aspects, including its unique Amberson style design of which few remain. There is also concern about the loss of winter activities that take place on the pond like ice skating.

However some see this all in a different light.

Paul Pouliot sees this as an opportunity to go back to a pre-colonized version of the river. Paul Pouliot is the the council chief (Sag8mo) and speaker of the Cowasuck Band of Pennacook- Abenaki People. Pouliot would like to see the river return to its original form, which would allow for the return of traditional fishing practices such as fish weirs. Fish weirs are collections of stones used to herd fish into more advantageous fishing locations. Pouliot thinks the dam should be replaced with a fishing weir. “It would be one of the very few places in the state where you could see what a fish weir looks like,” said Pouliot. Pouliot would also like to see two other local dams owned by UNH removed as well.

Whether the river would be free flowing is also a point of contention.

Paly said the removal of the dam would bring about the creation of a free flowing connection between the ocean and the pond. Paly said this connection would be beneficial to the ecosystem during floods. “They pick up a lot of sediment and wash that sediment into the lower portion of the estuary, they scour the channel, they create habitat,” she said.

But others believe this simply is not going to happen. Harris said the town got a sneak peak of what the undammed pond and river would look like in 2008 when the river was allowed to flow freely. “The Oyster River was never that big,” he said. Harris said the water level will drop to such low levels that it won’t support any of the wildlife that a removal would be intended to save. “There are not going to be any bass or pickerel existing in there,” said Harris.

This won’t affect all of the Oyster River though, said Bromley. Bromley agrees the water level will go down in the pond turning it into a stream but farther upstream from the dam it will make less of an impact on the river. “The impoundment goes away, but the river does not,” said Bromley.

Harris said that a removal of the dam would also cause an explosion in invasive plant species. Bromley agrees that invasive species could become a problem if not managed correctly in the wake of a dam removal, but he said a stream restoration plan will follow a dam removal to mitigate the growth of these species.

Another point of discussion is whether or not the dam is a barrier to fish migration. Paly said the current dam is stopping migratory fish from completing their journey between the ocean and freshwater rivers. Paly also said the existing fish ladder only helps with one direction migration. “Some fish are able to get into the Mill Pond Dam, but then they can’t get back down,” said Paly. Harris suggests instead of eliminating the dam, a migration notch be added to the dam, this would allow fish to get out of the pond. The referendum is required to be scheduled between 30 to 90 days following the date of the certificate of the referendum.