Shakespeare’s The Comedy of Errors comes to UNH

The play opens. There is no curtain.

A man enters — shackled in a knotted rope — and pleads for his life.

He stands accused by Duke Solinus (played by Ansley Berg), having failed to pay the fee for trespassing on a rival country’s land. The penalty is death. 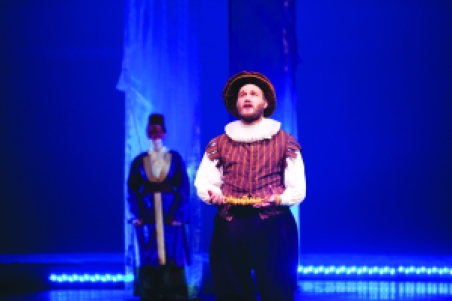 Egeon, played by Patrick Hart, recites a woeful tale of the loss of his sons and wife at the opening of the play.

Had this been a tragedy, the executioner’s axe may have fallen with swift and uncaring justice. But this play is no tragedy. In fact, its one of Shakespeare’s better known comedies, “The Comedy of Errors.”

Egeon, the Syracusian merchant (played by Patrick Hart) pleads a woeful tale of heartbreak and loss: of lost sons, servants and wife. The merchant was spared, but for one reason: He must find someone in the next 24 hours to pay his fee or the execution resumes, thus starting the plot for the play.

The fast-paced comedy is in stark contrast to the opening scene and is in fact a style known as Commedia Dell’arte.

Most of the characters in the performance wore masks, and these actors brought in elements of Commedia Dell’arte. Ensemble characters, such as merchants, hit triangles, drums and other percussion instruments to accent actual injury between the actors — a comedy style known as slapstick.

The two Dromios, played by Kristen Henrick and Olivia Fiore, brought hilarious antics through wild flourishes and generally being the punching bags for their masters. An apt comparison would be the comedy of the Three Stooges.

Dromio of Ephesus, played by Kristen Henrick (middle), demonstrates the Commedia delle’ arte. The Dromios wore identical masks to indicate that they are twins.

A few notable exceptions were mask-less: namely, the lovers Antipholus of Syracuse and of Ephesus; Egeon; and the four main women of the play — Adriana, Luciana, Emilia and Courtesan.

These characters brought a more Elizabethan air to the stage and were the serious counterparts to the over-the-top co-stars. While the masked characters seemed to be caricatures, these actors felt real. Egeon’s plea for his life had the conviction of a dying man, and Antipholus of Syracuse’s love-inspired appeal to Luciana had a timeless quality, which Commedia Dell’arte can lack.

The blend of highbrow Shakespearean drama and the over-the-top shenanigans of Commedia Dell’arte brought the play to a happy medium, perfect for a young college crowd. The flurry of movement from the Dromios helped to explain a large part of the sometimes-dense wordplay of the bard, and the results were a well-crafted and enjoyable piece of theater.

The Comedy of Errors will still be performed from Thursday to Saturday at 7 p.m. with a Sunday matinee at 2 p.m. in the Johnson Theater in the Paul Creative Arts Center.

The cast of The Comedy of Errors takes a bow at curtain call after their second performance together Thursday night.

USNH and CCSNH set to merge amidst financial struggles