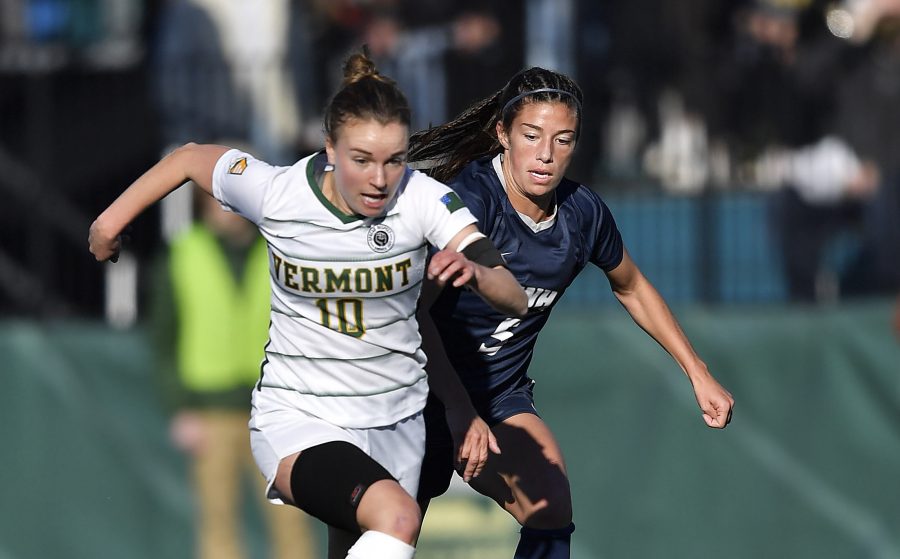 BURLINGTON, V.T. — 11 minutes and seven seconds. With the score knotted at zero, that was all that separated the University of New Hampshire (UNH) Wildcats women’s soccer (6-9-4, 4-4-1) and the University of Vermont (UVM) Catamounts (12-5-1, 7-2-0) from overtime Sunday afternoon. Regulation had been ambivalent to UNH, while overtime had been kind to them. Their road to the America East Championship involved back-to-back shootout victories.

11 minutes and seven seconds. That was all they needed to try and win back-to-back-to-back games outside of regulation and be enshrined in history.

The game seemed fated for extras as UNH senior goalkeeper Cat Sheppard hurled a ball to her left and towards senior defender Jamie Irwin. At first glance, it was a harmless pass, but as Irwin cut up the field, the ball escaped her orbit and entered that of Vermont first-year midfielder Bailey Ayer.

The two fought for the pass while Ayer ran further down the field. Irwin offered a nudge that was intended to rattle Ayers’ control of the ball. Instead, it created more separation for the Catamount attacker. They reengaged, but before Irwin could make another play for the ball, Ayer passed the ball to the center of the field.

Vermont’s junior Cricket Basa turned and wound up her leg before the ball could reach her. By the time it did, it was quickly in flight. Its destination: the bottom right-hand corner of UNH’s net. The Wildcats star goalie dove for the ball while teammate, sophomore Logan Nicholson attempted to stop it as well. Both fell to the ground, looked behind them, and saw the ball sitting idle in the back of the net.

10 minutes and 53 seconds was now all that stood between UNH and a heart-breaking loss.

“It was a bit unfortunate. It was a bit of a broken play, to be honest,” said UNH head coach Steve Welham. “It’s a great shot because it goes in, but that’s something we felt we could have nullified had we read the play as a team and maybe stepped up a little bit as well.”

Welham added it was an aberration in the play of Irwin, who he credited as a key cog to the Wildcats defense.

“[Irwin] has made so many standout plays. One-on-one defending, reading the play, covering for our other defenders. She does a lot of the little things really well,” said Welham. “She’s been incredibly solid all year, I think one of our unsung heroes.”

Despite Basa’s late goal, the Wildcats never acquiesced. With roughly three minutes left, the ‘Cats were awarded a free kick following a foul on Nicholson. In response, UNH sent everyone up the field, including Sheppard who was now in the middle of the field.

Sophomore Emily Bini was trusted with the kick and launched a low drive into the goal area. After bouncing off a pair of players, the ball found UNH first-year forward Meghan Guarente. The newcomer lifted the ball up and off another defender. The shot resulted in the ball slowly bouncing toward the back of the net. Vermont senior goalkeeper Lydia Kessel spotted its trajectory, spun around, extended her arms, and brought the ball into her body before UNH senior Julie Cane could put it into the back of the net.

UNH made one last charge a minute later. Nicholson vaulted a service that her fellow sophomore Ella Dudley was able to head, but her shot spun wide of the net and out of bounds. The Catamounts bided their time before they could storm the field while the Wildcats were left wondering what-if.

“That’s usually what happens. It’s going to be one or two big moments towards the end of the match for either team, and we had one, but we just didn’t capitalize, and that’s what it comes down to,” said Welham.

While Welham won’t deny the pain of defeat, he was left feeling proud of what the team was able to accomplish. Not just in the postseason, but during the regular season as well.

“They have nothing to be ashamed of. I mean it was a wonderful effort. That remains the same now, and we played well enough to win. [Basa’s goal] was the one moment that decided the game,” said Welham. “I couldn’t be more proud. Especially the seniors, what they’ve been able to do for our program and we were immensely proud of what they’ve done. And we know we were right there.”

Nine months. That’s how long Welham and Durham will now have to wait before the UNH women’s soccer team can take the field again.