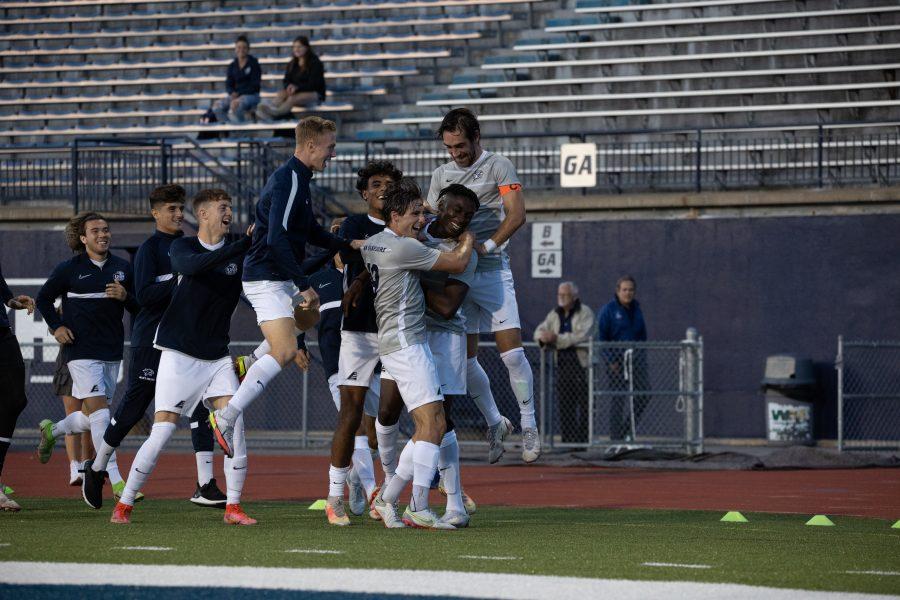 LOWELL, MASS. — The University of New Hampshire (UNH) Wildcats (15-0-2, 7-0-1) have gone undefeated and is one of just two teams in the nation to do so. The Wildcats sawed off the UMass Lowell (UML) Riverhawks (4-11-1, 3-5-0) Monday night by a final score of 1-0. The narrow victory never felt that close with UNH in the driver’s seat for most of the night. Graduate student Paul Mayer bagged the game winner for his fifth goal of the season.

Despite their stellar record coming into Monday’s match, UNH still needed a result from their final regular season game to clinch the top seed in the America East (AE). A draw or win would be enough and the ‘Cats seemed hell bent on the latter.

The game was full of emotion and got chippy at times. The referee issued five yellow cards and awarded 28 fouls. When the final whistle sounded the Wildcats erupted in celebration that continued in the locker room.

Senior Chris Pinkham put into words what the achievement felt like.

“It feels amazing going undefeated in the regular season,” said Pinkham. “Being one of two teams in the country to still be undefeated is something pretty special to be a part of and something we will cherish for years to come.”

With the win UNH secured home field advantage throughout the AE playoffs to go along with their first-round bye. Their opponent will either be the University of Maryland, Baltimore County (UMBC) Retreivers (8-7-2, 3-4-1) or Stony Brook Seawolves (8-6, 5-3) pending the two schools’ quarterfinal clash.

The Wildcats don’t seem overly concerned with who they will be playing come playoffs. Senior Tola Showunmi said the focus has to be on themselves with their opponent still to be determined.

“I don’t have a preference because it’s not something we can control, we will just wait for the results and prepare as best as we can,” said Showunmi. His teammate echoed the sentiment.

“For us it doesn’t really matter who we play,” said Pinkham. “We want to play everyone.”

Pinkham added there is one team that UNH wants a rematch with: the No. 2 seeded Vermont Catamounts (11-4-2, 6-1-1). UNH drew 1-1 versus Vermont earlier this season in what was no doubt the most hot-tempered game of the year for the ‘Cats.

No matter the opponent UNH will be the favorite to take home the AE championship for the fourth straight season. That expectation plus their undefeated record will only add pressure on the ‘Cats in the postseason. But Showunmi said the team won’t feel it any more than they already have this year.

“I don’t think the pressure is raised. We hold ourselves too high expectations, so the pressure comes from ourselves,” explained Showunmi.

UNH will have some time off before their postseason kicks off. The importance of rest can’t be overstated in a long and grueling season.

“We are definitely looking forward to a bit of rest to reset, recharge and then re-engage when we are ready to do so,” said Pinkham. “It gives us plenty of time to prepare for the next game.”

The next game in question will take place Wednesday Nov. 10 at 6 p.m. in Wildcat Stadium.