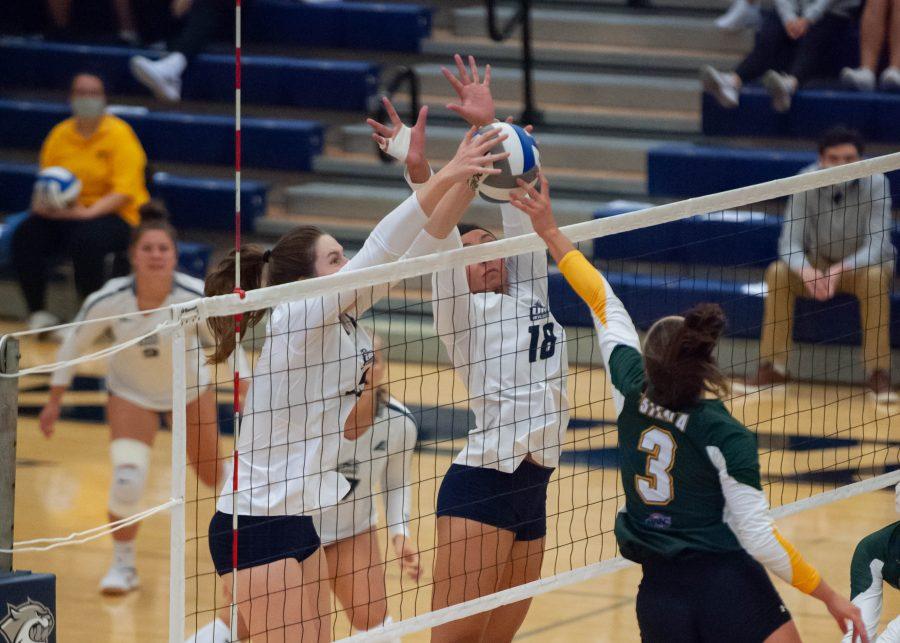 It was an incredible second half of October for the University of New Hampshire (UNH) Wildcats (15-10, 6-4). Six consecutive wins, sixteen consecutive set wins, and big-time victories against Stony Brook (12-11, 6-3) and UAlbany (11-13, 6-5) headlined a season-saving run. UNH is poised for a playoff spot as the final month of the season is underway.

A win against one of the top teams in the conference proved to be the spark the Wildcats needed. UNH grinded out a huge win against UAlbany in five sets on Oct. 15. The confidence boost that the team gained from that win was instrumental to their run. UAlbany was picked to win the America East for the second consecutive season in the conference’s preseason coaches’ poll.

“After dropping a fifth set match to Stony Brook, we’ve kind of been in a hole a little bit. They only take the top four teams and I think our team read the writing on the wall and put together a really good effort, all twenty of them,” said head coach Christopher Feliciano. “We came out with a good W and a well-needed W to put ourselves back in the playoff hunt.”

Feliciano also noted the roller-coaster of a season it’s been for the team but credits everybody for taking care of business.

“They’re growing. Everyone would love to have a great season and our season has kind of been on this positive trajectory. We’ve had some ups-and-downs, some injuries, but what’s been really nice is we’re really deep and we have a special group,” said Feliciano.

The Wildcats rattled off consecutive set sweeps against Merrimack (0-25, 0-10), Saint Peter’s (1-25, 0-14), NJIT (2-22, 0-10), and Stony Brook. The sweep against Stony Brook is a note-worthy one. The Wildcats had dropped their previous meeting on the road in five sets. Stony Brook currently ranks second in the America East and the two teams could face off in the playoffs.

After stringing together five straight victories, Feliciano was still not ready to settle.

“It’s great, but we still have work to do. We’re focused on the next day to get better. We just have a job to do. We want to put one in front of the other and get better every day,” the head coach explained.

Senior outside hitter and tri-captain Kate Bilyeu could not be prouder of her team for their longest winning streak since 2016.

“What has impressed me the most about our run is that we have not become complacent,” said Bilyeu. “Everyone is focused on the next game as soon as we step into the gym. It can be hard to do that when you haven’t lost in so long, but I am really proud of them and the effort everyone has put in.”

Bilyeu has given some thought to the team’s recent success but understands that there is still a long way to go.

“We have thought about our win streak because it is a great accomplishment and we have worked hard for it, but we are focused on the rest of the season. We still have a lot of volleyball left so we have to keep working everyday but it is nice to enjoy those past wins.”

Unfortunately, all good things must come to an end. The ‘Cats dropped to fourth place in the America East after falling to UAlbany on the road in five sets Sunday afternoon.

UNH will look to get back on track Saturday evening against the Binghamton Bearcats (7-14, 3-6) on Senior Day from the Lundholm Gymnasium at 4 p.m. The ‘Cats will play for the chance to crush the Bearcats playoff hopes. Binghamton sits 2.5 games back of the Wildcats for fourth place in the conference.