UNH football: Fifth straight loss widens the gap between Wildcats and their return to the postseason 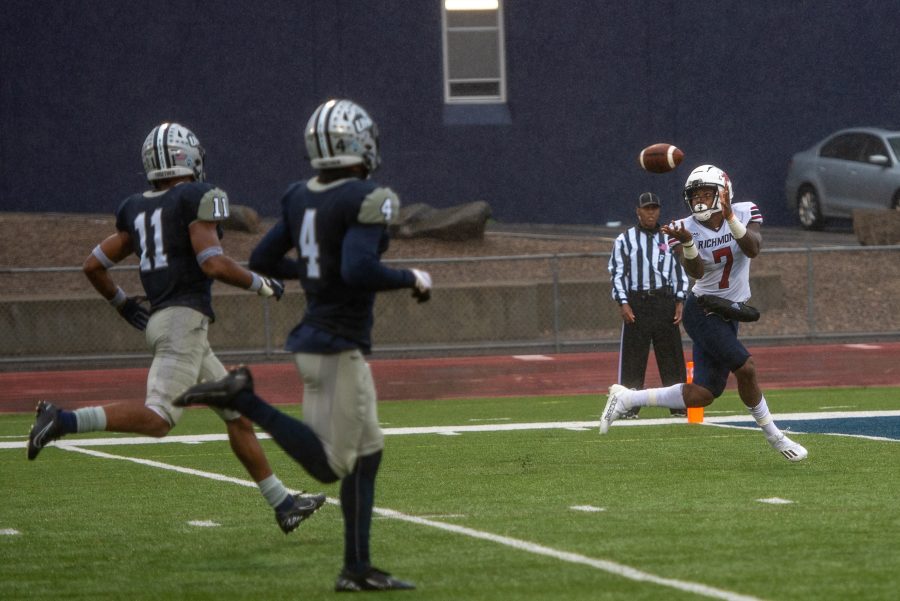 DURHAM, N.H. – A season that began with so much promise quickly took a turn for the worst after a week four trip to Pittsburgh. Following a 3-0 start, the University of New Hampshire (3-5, 2-3) Wildcats have watched injuries and inexperience completely derail their season and veer them off the tracks of a postseason return.

The most recent loss to the Richmond Spiders (3-5, 1-4) doesn’t completely rule out a bid to the Football Championship Subdivision (FCS) playoffs for the Wildcats; however, with just three games remaining, time is running low for them to finalize their case to the committee.

It was a cold and rainy afternoon Saturday, and it was obvious from the opening kickoff that the elements were going to play a factor in the game. Before Richmond stormed back to win 35-21, New Hampshire was able to take advantage of a couple of the Spiders’ miscues that were seemingly caused by the dreary Durham conditions.

The Wildcats saw a pair of muffed kicks, an errant pass leading to an interception, a handful of dropped balls and a snap get away from the Richmond punter. UNH was only able to turn two of those gaffes into points, however. Most of the seemingly weather-related mistakes were made by the visiting Spiders and not by the Wildcats.

Redshirt first-year running back Isaac Seide says the team is always prepared for games like that. He noted that playing in New England helps by being able to practice in all kinds of weather unlike some of the other conference members.

UNH head coach Sean McDonnell didn’t seem to think the weather was all that bad, and thought it was a relatively clean game given the forecast.

“The weather wasn’t a factor,” McDonnell interrupted. “I think both teams held onto the ball for the most part. There weren’t any bad missed snaps or anything like that. We’ve played in worse weather.”

The long-time head coach was not ready to use the weather as an excuse for his team’s fifth straight loss. He explained that it can be tough to gauge where the Wildcats improve week-by-week given the differing strengths of each opponent. He did, however, note that inexperience on defense has been part of the reason for the team’s backslide.

Seide emphasized that small mistakes in games like these can go a long way for a team trying to get back on track.

“I think it’s just minor mistakes,” said Seide. “In this game a simple mistake could make a huge effect on the overall performance.”

Some of the same mistakes New Hampshire has seen all year reared their ugly head once again on Saturday. Redshirt first-year kicker Sean Lehane missed a pair of field goals in this most recent outing to bring the team down to 1-for-9 on field goals for the season.

The Wildcats were also hindered by injuries to some of their key players this past weekend. Sophomore quarterback Bret Edwards reportedly was battling through shoulder, calf and hip soreness after taking a shot against Elon. McDonnell says Edwards did not practice on Tuesday. This led to first-year quarterback Brody McAndrew seeing action in the middle portion of the game. McAndrew passed for just five yards on three attempts. He did gain 30 yards on the ground and even found the end zone on one.

The biggest blow to New Hampshire moving forward is the status of sophomore running back Dylan Laube. Laube – who is second on the team in touchdowns and all-purpose yards – has suffered a high ankle sprain and was seen wearing a boot on the sideline of Saturday’s game. McDonnell said the team is hopeful Laube will be able to return for the regular season finale against Maine in three weeks.

The remaining schedule for the Wildcats features a pair of road games at UAlbany (0-8, 0-6), Rhode Island (5-3, 3-3) and a final home game against Maine (4-4, 3-3). One more loss would all but kill New Hampshire’s hopes for a playoff berth. If they want to make a case to the committee, they’ll likely have to sweep their final three games and do so convincingly – something they haven’t been able to prove at any point this season.

The Great Danes will be first in line to try and make sure McDonnell and the Wildcats extend their playoff drought to a fourth consecutive season. New Hampshire will travel to Albany for a 1 p.m. kickoff on Saturday.