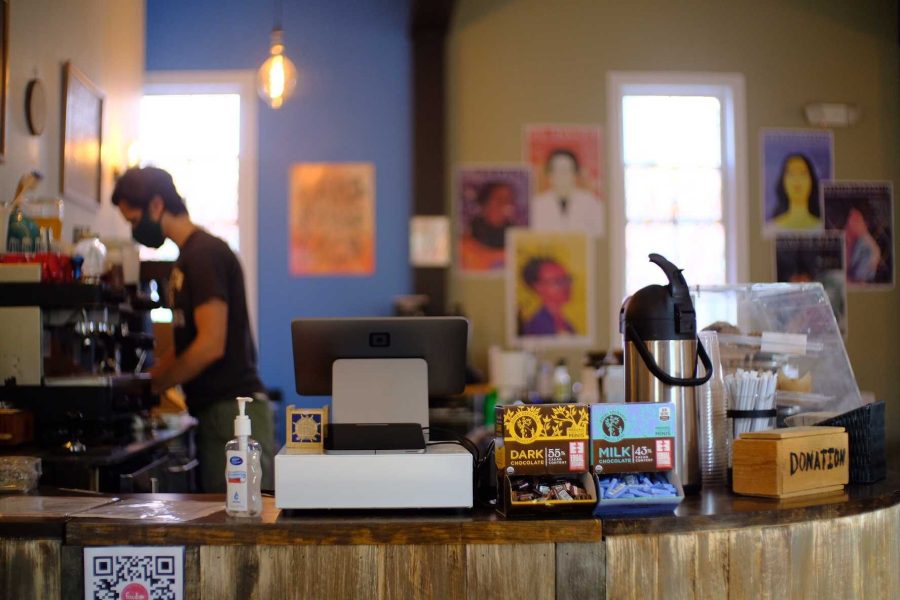 Upon stepping into 37 Main Street in Durham, the atmosphere can be described as autumnal. Somehow, the room smells of a blanket-wrapped hug and the vintage style lightbulbs cast a warm-toned glow throughout the room, even at 1 p.m. The various artwork plastering the walls hammers in the message the room is practically shouting: Make yourself comfortable and stay awhile. The specialty coffee and drinks offered are a pretty sweet addition as well.

The Freedom Cafe, now settled into its new home on Main Street, is  a nonprofit organization “dedicated to ending human trafficking and the commercial exploitation of all people,” according to their website.

After eight years on Mill Road, the organization decided (with a nudge from their landlord) that it was time to make the big move to Main Street. “We had always wanted to be able to get to Main Street. And we weren’t really quite ready. We thought we were going to stay in the other location for maybe at least another year as we prepared and raised resources for [the move].” said Bessette. He credits the sudden move to two events: Their long-time landlord deciding not to renew their lease on Mill Road, and the Amherst branch of the cafe closing due to difficulties sustaining itself during the pandemic. Much of the furniture and equipment seen in the new location was a donation from The Freedom Cafe at UMass Amherst. “We probably would have just had to close as well, if it were not for UMass Amherst making that donation,” he said.

Opening in 2013 on Mill Road in Durham, The Freedom Cafe was started by a group of students at the University of New Hampshire (UNH) from various majors who were inspired by an ethics class at the university. The students “wanted to try to create something that would bring awareness and action to one of those issues [discussed in the class]” said executive director and co-founder of the Freedom Cafe, Bryan Bessette.

It’s clear that those students have since been successful in their endeavors – since its opening, The Freedom Cafe has donated over $65,000 to various organizations aimed to combat human trafficking. Their website says “funds support initiatives that are specific and directly impacting four core pillars of the movement to end trafficking: Prevention, Intervention, Legislation, and Aftercare.”

The premier branch of the cafe is successfully up and running and has seen an influx of traffic and volunteers since opening in the new location in June. At the September volunteer orientation,  they onboarded 15 new volunteers who do everything from working behind the counter to organizing fundraisers to spreading awareness about human trafficking. Volunteers get involved with the cafe via their website where applications and position descriptions are available.

Mike Rieder, a former student at UNH, volunteered at the cafe for three years while he was in school and has worked as the cafe manager for one. “As a student I worked both behind the bar and as the sound and music guy for events,” he explained. “Now, my job is to oversee everything here and make sure things get done the way Bryan wants them.”

“Our most popular drink is a vanilla latte,” says Rieder, who regularly makes the drink for customers. Junior Victoria Broadley backs up his claim. “I come to The Freedom Cafe because I know I’m supporting a good cause and I get a really good vanilla latte out of it,” she said. Broadley comes to the cafe at least once a week.

Bessette said “one of the coolest drinks that I don’t think you can get anywhere around is a Greek frappe.” He describes the drink as having the consistency of mousse, as the coffee is frothed with a pinch of sugar and then layered on top of milk.

Something that seasoned patrons of the cafe appreciate is the story and passion behind the coffee. As an organization committed to selling ethically sourced products, the  cafe knows the story behind each  coffee.  Bessette calls the Kayon Mountain Ethiopian blend, which is their coffee of the month, “the most exciting coffee” that they’ve carried.

“[Ethiopia is]  considered the birthplace of coffee,” said Bessette. He explained that several regions have become famous for their coffee production, but Kayon mountain coffee farmers have been working for the last 15 years to break into the market with a quality blend.  “It’s so exciting to be able to carry this [coffee] and it’s one of the first ones that we’ve had from that region, and it’s one of the best coffees,” he said.

Photo courtesy of the Freedom Cafe.