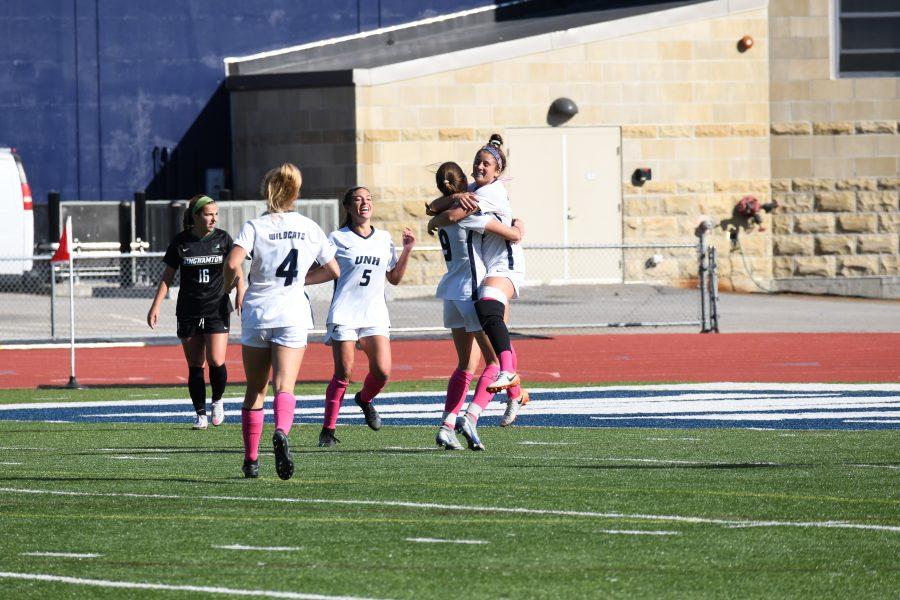 Unlike their last game, the Wildcats escaped this endless time loop with the win on Saturday in Durham, defeating the Binghamton Bearcats (8-6-3, 4-1-2) to bolster their playoff odds.

It was only fitting the seniors led the way for the ‘Cats on Senior Day. Graduate student Casey Peterson started the scoring opportunity with a beautiful service that skipped just shy of first-year forward Meghan Guarente. To the shock of everyone in Wildcat Stadium, sophomore Emily Bini corralled the ball before it slid out of bounds and passed it back to Guarente. The New Jersey native lofted the ball into the air to find fifth-year senior Francesca Picicci. Picicci created a looping arch with a header that escaped Binghamton’s senior goalkeeper Haylee Poltorak.

“The build-up to that play was something outstanding. It was what we had been working on, and it was really nice to see that come out,” said UNH head coach Steve Welham.

UNH senior goalkeeper Cat Sheppard also represented the senior class well, recording six saves on 17 shots faced for her seventh shutout of the season. A feat made more challenging by a strong effort from Binghamton in the final 45 minutes of the match. Sheppard and the ‘Cats weren’t surprised by the strong performance.

Though Sheppard made five of her six saves in the second half, the defensive play of the game belongs to sophomore Alivia Kelly. With six minutes to go, Binghamton senior Nicole Scudero had a breakaway with only Sheppard to beat – at least that was the initial thought. Just as Scudero was about to rip a shot off her right leg, Kelly slid into the Bearcat’s legs and blocked the shot to all but seal the win.

Kelly’s save was emblematic of a defensive-minded approach that UNH employed in the second half. Something Welham was confident shifting to due to the team’s defensive prowess.

“We say this all along, we feel like if we get a goal we can beat anybody. Obviously, you need things to go your way as well and the team has to do their job, but we wanted to nullify certain things that Binghamton was doing,” Welham said.

The Wildcats, a team that needs every point they can get, earned three of them in the win. This will be monumental in their chase for a playoff spot. Heading into this week, UNH is now fourth in the conference with 13 points. UMass Lowell is ahead of them and the New Jersey Institute of Technology (NJIT) behind. This win is made even more vital following last week’s disappointing loss to NJIT.

“This is huge. After dropping the game last week, we definitely needed to bounce back and win this one. And we did, so I’m happy,” Sheppard said.

Yet, Sheppard and Picicci are in lockstep believing the playoffs have already begun for the team due to the importance of every game.

“Today was definitely a playoff feeling. It was gritty at the end, [we] got a 1-0 win which was huge. It definitely felt hectic, but we got the job done,” Picicci said.

While Welham agrees, he noted the Wildcats have had to be in this mindset since their Oct. 3 match against Stony Brook when the team’s record was 3-6-2.

“It’s felt like that for a while now. We hope that’s a good thing because they realize that we’ve been in this playoff-type mode to try and get in the playoffs,” Welham said.

Aside from the playoff implications, sending New Hampshire’s seniors off with a victory made the win even sweeter for both Welham and Sheppard.

“You always want to honor your seniors. I think the team and the seniors did that themselves. They honor the team, then honor themselves,” Welham said. “So, to have a huge win on Senior Day, it was a very special day.”

The Wildcats look to clinch a postseason berth Thursday, Oct. 28 when they travel to the first-place Vermont Catamounts (9-5-1, 6-2) for a 4 p.m. kickoff.