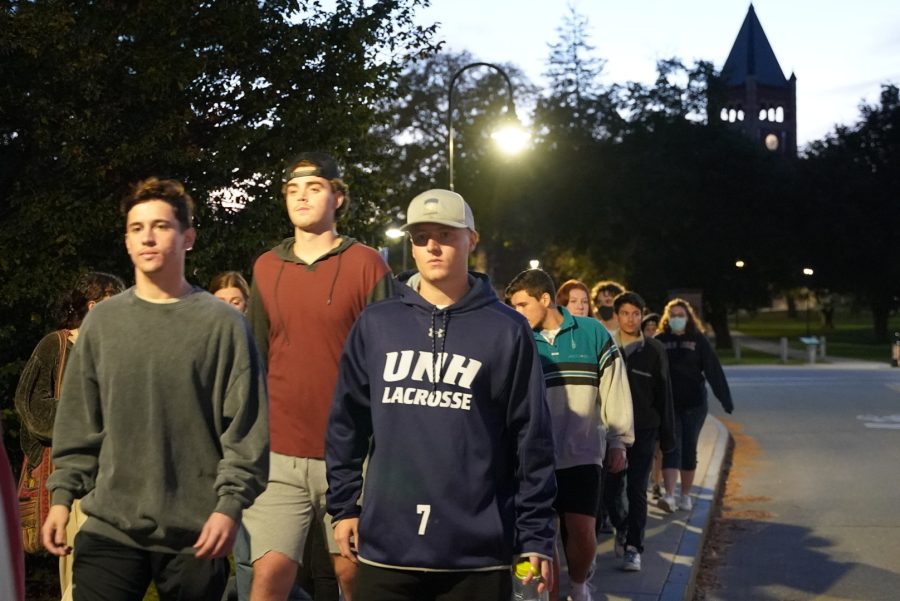 A student at the University of New Hampshire (UNH) has been accused of multiple acts of rape and sexual assault against different women.

A Change.org petition has circulated calling for the expulsion of the UNH student, garnering almost 4,000 signatures at the time of reporting.

UNH Police and the Durham Fire Department were on scene at Stoke Hall Friday, where the accused was reportedly living.

University spokeswoman Erika Mantz shared an email that had been sent to Stoke residents.

“The university, and University Police, thoroughly investigate all allegations of criminal activity, including vandalism, sexual assault and any other alleged violation of university policies or law.  The university is aware of a recent sexual assault claim and several serious vandalism incidents in Stoke Hall.  We take every allegation seriously, investigate all those matters, and take action as needed to ensure the safety of all. We cannot always provide the level of information you may want about active investigations and actions that have been taken, but please note that any students found responsible will be held accountable with sanctions ranging from probation and restitution to suspension.”

The email also reminded students of the resources and reporting tools available on campus.

Mantz said, “the university is unable to comment further at this time.”

UNH Chief of Police Paul Dean has not responded to The New Hampshire’s request for comment at this time.

In August, UNH Police reported two instances of a male student who allegedly met with women on dating sites, then later sexually assaulting them. These incidents took place off-campus. It is unknown if these cases are related.

“At UNH, sexual assault claims and reports are often swept under the rug. I know so many people who have been assaulted and UNH has done nothing, even after these claims have been reported. I hope all victims at UNH receive the justice they deserve. My heart goes out to all of those affected by sexual assault crimes,” said senior Sofie Trapp.

Another student, senior Nadia Daaboul said, “As a female, I’m so fed up with this school’s lack of action on sexual assault. They are more concerned about their name and reputation as a university than they are about their students. I want to feel safe coming to school. School is my happy place away from home, and the fact that I cannot go to a party or even walk the campus at night is horrible. Even leaving the bars I will not even consider leaving the immediate area by myself.”

UNH Student Body President (SBP), Sophia Spina and Vice President Alex Colella posted to the SBP Instagram on Friday, Oct. 22 saying, “We have been aware of the recent assault allegations and stand with the survivors of sexual assault. We are committed to creating a safe environment for everyone on this campus and will not tolerate or respect this kind of behavior. Our thoughts are with the survivors as they work through this difficult time.”

A student-planned protest took place on Friday outside of UNH President James Dean’s house at 6 p.m., with over 100 people in attendance.

Emma Daley, a junior political science major, addressed the crowd. She said, “I’m going here to get a decent education, and I can’t even walk around anymore without worrying I’m going to get assaulted.”

Speaking about sexual assault victims, Daley said, “I don’t know if they’re out here or if they can hear anything. But I stand with you.”

Following a report that “the dean” was at Stoke Hall, the crowd walked there and stood in front of the residence hall. More chants and short speeches were heard. Eventually, Dean of Students Michael Blackman came out to address students and take questions. He, and other administrators, stayed to answer questions and talk to students privately as well.

“I know it’s hard, because people are looking for specific answers and updates, and want to know what’s going on,” said Blackman. “And unfortunately, because we need to respect the privacy of the people involved in this situation, including any potential victim of sexual violence, we don’t give details to people about what’s going on. And I know that’s really hard. I know you all want answers. I know you all want to know what the school is doing. And I know that it’s hard to have an administrator up here that you don’t know that we can’t tell you specifics.”

Students at the protest asked Blackman about UNH’s timely warning policy and the lack of warning stemming from the incident.

“There’s a very specific set of criteria when we’re legally allowed to get those timely warnings out to people. So going into why a timely warning may or may not have gone out in that situation would require going into details about this particular case,” said Blackman.

He encouraged students to reach out to staff members if they are feeling unsafe in buildings on campus and utilize supportive measures that can be offered.

Sexual Harassment & Rape Prevention Program (SHARPP) is a 24/7 confidential support center for survivors and their loved ones. SHARPP offers in person, webchat/text, and over the phone advocacy for people impacted by interpersonal violence in all forms (sexual violence, relationship abuse, stalking).  Students and members of the UNH community can reach out if needed.

According to the SBP Instagram post, resources were available to residents of Stoke Hall in the first-floor lounge until 6:30 p.m. on Friday, Oct. 22. Blackman, UNH police department Captain Frank Weeks and a SHARPP advocate were present for residents in need.

Sports Editor Brackett Lyons contributed to the reporting of this piece.