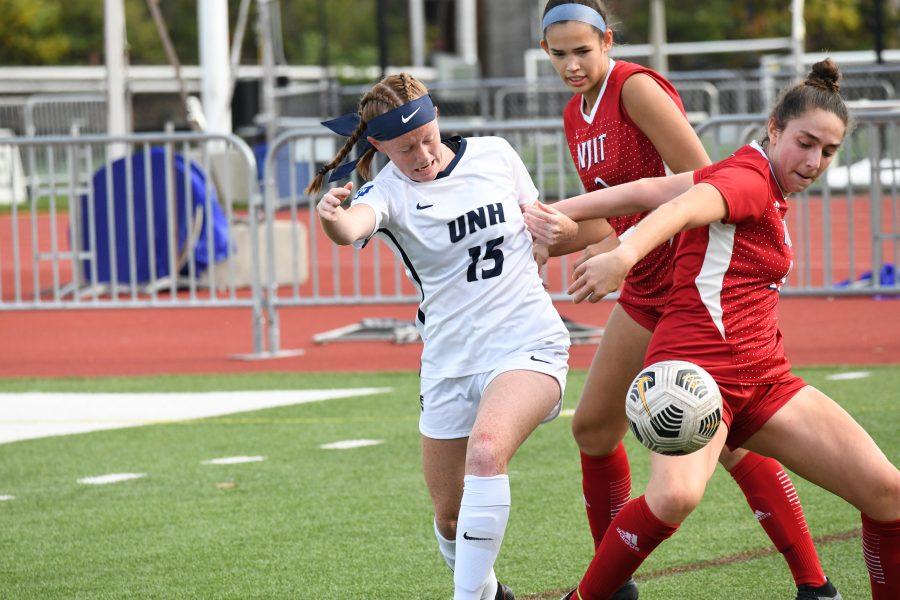 DURHAM, N.H. — One goal was enough to give University of New Hampshire (UNH) women’s soccer (5-7-2, 3-3-1) the win, Thursday night. Sunday afternoon, however, one goal by the New Jersey Institute of Technology (NJIT) Highlanders (5-10-1, 3-3-1) was enough to end UNH’s three-game winning streak.

Sunday’s defeat in Durham will be a tough pill for the Wildcats to swallow. UNH had 18 shots, five of which were on goal, 10 corners, and had the ball 64% of the time. NJIT managed just two corners, two shots, and one fateful shot on goal.

NJIT’s lone shot on goal came 18 minutes into the first half. Senior Highlander Whitney Roth received the ball after a throw-in and brought it five yards up the field. Roth then rifled the ball towards the box. UNH sophomore back Alivia Kelly headed the ball into the air, instead of clearing it, Kelley indirectly launched the ball into the goal area.

“Just an unlucky kind of thing,” Sheppard said about the goal. “I think [NJIT] was looking for a goal like that to score and then kind of sit back and let us play.”

After the goal, Sheppard gathered her teammates in a huddle for a discussion. The talk focused on executing their game plan, she said.

“We definitely wanted to press them early and get on them early, and we really weren’t executing that as much as we wanted to,” explained Sheppard.

Her message to the team was that they “need to flip the switch. We need to run around, and we need to go. We need to stop sitting back and inviting them to score.”

Losing despite such a dominant showing, made the loss feel even more painful, said UNH head coach Steve Welham.

“It’s frustrating,” Welham said. “This is the beauty and the burden of soccer, where sometimes the team that’s dominating doesn’t always win.”

UNH had no greater chance to tie the game than on their 10th corner of the afternoon in the game’s 60th minute. Sophomore forward Emily Bini placed a perfect cross into the NJIT goal area that found fellow sophomore Ella Dudley amidst a red sea of jerseys. Dudley timed her jump perfectly to head the ball toward NJIT junior goalkeeper Molly Saylor’s far post. It felt, looked, and sounded like it was destined to find the back of the net. Senior defender Siani Magruder had other ideas. Magruder leaped off the ground, sacrificed her body, and launched the ball out of bounds to keep the game tied.

Magruder’s save proved pivotal. The Wildcats failed to muster any more serious scoring threats from then on. The game was reminiscent of the team’s 2-5-2 start; not the team that had embarked on a three-game winning streak over the previous few games.

One thing that will make the loss even more bitter is the results from other teams around the America East. Wins by the University of Hartford (8-3-3, 3-2-2) and the University of Albany (4-6-4, 3-2-2) have vaulted them up the standings, and sunk UNH to sixth.

With each playoff spot contested, Welham has admitted to doing a bit of scoreboard watching as the season winds down.

“We’re looking at [the standings], but the biggest thing is we need to take care of our own results in our own games. Everything else will fall into place,” Welham said.

Looking ahead, the Wildcats may be without fifth-year senior Francesca Picicci on Saturday, Welham said.

After Picicci completed a one-touch pass, she reached for her knee and bent over. As the ball traveled up the field, she appeared reluctant to give chase and only walked the length of the field. Roughly a minute later, she was subbed out of the game for junior Shayna Salis. Picicci did not warm up ahead of the second half and remained on the sideline for the rest of the match.

Welham said Picicci has been playing through knee issues all year, but it’s too early to tell if this latest issue will sideline her for the ‘Cats next match. Losing Picicci for any amount of time would be debilitating for the Wildcats. Outside of being a team captain, she leads the team in both goals with five and points with 11.

Reinforcements could be on the way, however. Welham said the team is hoping they’ll get senior Julie Cane back on the field Saturday. It would be the midfielder’s first game action since Sept. 26, when she suffered a high ankle sprain.

The status of these Wildcats won’t be known until this Saturday when they host Binghamton University (8-5-3, 4-1-2) at 1 p.m. for Senior Day.