UNH women’s soccer: Wildcats peaking at the right time after winning three in a row 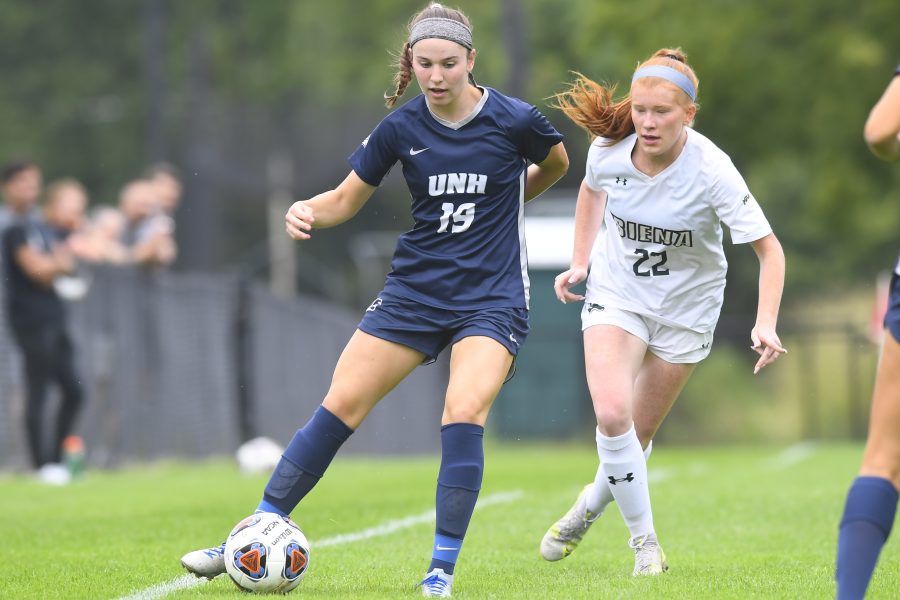 ORONO, MAINE — On his aptly named “One,” Harry Nilsson mournfully sings, “one is the loneliest number that you’ll ever do.” But, for University of New Hampshire (UNH) women’s soccer (5-6-2, 3-2-1) one goal was enough to secure the win and extend their winning streak to three games Thursday night.

While first-year forward Meghan Guarante was credited with the lone goal, it was the pass from sophomore Anna Hewlett which made the play possible. Hewlett received the ball on the left side of the field, gathered it, and sidestepped a defender enough to clear a pathway. Her shot sailed over a sea of blue and white kits and found Guarante, who placed the shot high over the near post of Maine’s senior goalkeeper Kira Kutzinski.

UNH head coach Steve Welham said the was as the Wildcats designed coming into the game.

“The goal itself was really well played. We had spoken a lot about trying to find the weak side of the Maine defense and that’s exactly what we did,” Welham said. “Anna [Hewlett] played a wonderful service and Meghan [Guarante] was able to finish one time with her head which is obviously a very difficult skill.”

That’s not to say one goal was all the Wildcats had available to them. The team finished with 23 shots, 13 of which were on goal, five corners, and forced Kutzinski to make 12 saves to keep the Black Bears within striking distance.

“We weren’t fortunate enough to have a few more. A couple of big saves by their goaltender. So, some things didn’t bounce our way, but we were able to create quite a bit which was a really good sign,” Welham said.

Welham pointed to a few one-on-one chances as well as chances generated by corner kicks the ‘Cats should’ve cashed in if not for the play of Kutzinski.

Regardless of how many goals were left on the table Thursday night, UNH is now riding a three-game winning streak and have found themselves playing their best soccer of the fall.

Part of what’s fueling this winning streak is the Wildcats defense. They’ve tallied three-straight shuts for the first time since the start of the 2015 season.

An essential competent of that equation is UNH senior goalkeeper Cat Sheppard, whose strong play in the net has helped author this streak. Thursday’s latest clean sheet saw Sheppard tied for first among all America East goalies with six. It also saw her break her previous scoreless streak as Sheppard has not surrendered a goal in 272 minutes and 21 seconds; surpassing her previous career-best mark of 260 minutes and 21 seconds which was set during the 2019 season.

“We’ve said all along as well, we have a really strong backline,” Welham said. “We’re very happy with that back six, and the defensive shape of the whole 11 was very solid, compact, and we had to be that way with our long direct play, so we have to rely on that again for Sunday.”

While Welham will cherish the winning streak and is grateful for the momentum it’s brought to the Wildcats, he said the team can’t begin to celebrate quite yet.

“It feels like we’re starting to peak at the right time, which is always what you want to do. Having said that there’s still a lot of soccer to be played. There are nine points on the table of three games left. So many things can happen right now, there’s just way too many variables to talk even more about that.”

But still, even Welham can admit it felt a little sweet to come away with a victory in the border battle.

“To go up to their place and beat them there is a great feeling. It’s a special game,” Welham said. “It’s always an intense game. Rankings, records, everything goes out the window when those two teams play in any sport.”