UNH football: No. 25 Wildcats turn the page on Pitt, brace for No. 3 JMU on Homecoming Weekend 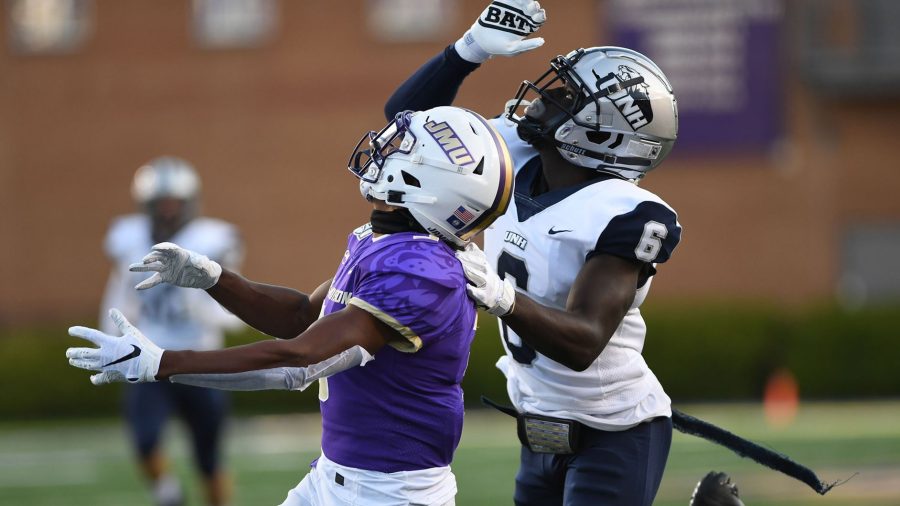 DURHAM, N.H. – The No. 25 University of New Hampshire (UNH) Wildcats (3-1, 2-0) have not let last week’s 70-point beating at Pittsburgh (Pitt) sour their moods ahead of Homecoming Weekend. New Hampshire will be welcoming the FCS powerhouse No. 3 James Madison (JMU) Dukes (3-0, 1-0) into Wildcat Stadium. The Dukes were FCS semifinalists in the spring and are the second leg of the toughest portion of the Wildcats’ schedule this fall.

UNH head coach Sean McDonnell gave a brief account of what he saw from Heinz Field last week in the 77-7 loss to Pitt.

“If you get punched in the face you’ve got to figure out how to get back up, and we got hit early and often,” said McDonnell. “We could not answer the call that you have to answer in those kinds of contests.”

Sophomore linebacker Bryce Shaw said the team has not been feeling sorry for themselves about their first loss of the season. He explained that the players knew as soon as they got into the locker room it was time to turn the page – it was on to JMU.

“The mood’s been good,” said Shaw. “No one wanted to dwell on last week. Everyone’s pretty mad. We’re pissed off.”

The Dukes have been one of the premiere programs in the FCS since the turn of the century. The team has made it to at least the second round of the FCS Playoffs in each of the last six seasons, including a National Championship over Youngstown State in 2016.

James Madison is currently averaging more than 53 points per game coming off a bye week. New Hampshire last faced the Dukes in 2019 on the road when former quarterback Ben DiNucci led his side to a 54-16 victory. Since losing DiNucci to the NFL, JMU has been able to keep their program strong including the dangerous running attack they always present. McDonnell explained that his opponent this week has been, “running the ball with reckless abandon.”

“They don’t rebuild down there, they reload. They’ve reloaded the gun pretty good, and they’ve stocked it with some pretty good bullets, so we’ll have our hands full when they arrive in Durham,” said McDonnell.

New Hampshire did squeak out a 35-24 victory last time JMU had to make the trek up to Durham. McDonnell explained how he thinks Maine and UNH have an unusual advantage in their home stadiums since they’re two of the longest trips teams have to make when traveling to a game. He also noted that they got a little help from DiNucci who had one of his worst games in the purple and gold.

The Wildcats will be down a few of their key contributors in the secondary for the second week in a row. They’ll be without senior safety Pop Bush, sophomore safety Joe Eichman and sophomore cornerback Derek Thompson after McDonnell said the team won’t be getting anybody back for JMU that was down last week. In their absence, first-year safety Noah Palm stepped up in a big way on the road. Palm led the team with 15 tackles a week ago and McDonnell remains confident that he’ll be a productive piece until the starters return.

“[Palm] did not have that proverbial deer in the headlights look and that’s what impressed me the most. He just went and played,” explained McDonell. “I really loved the way Noah played out there.”

Kickoff from Wildcat Stadium will be at 3:30 p.m. this Saturday as a part of Homecoming Weekend at UNH. The game will be aired on NBC Sports Boston.