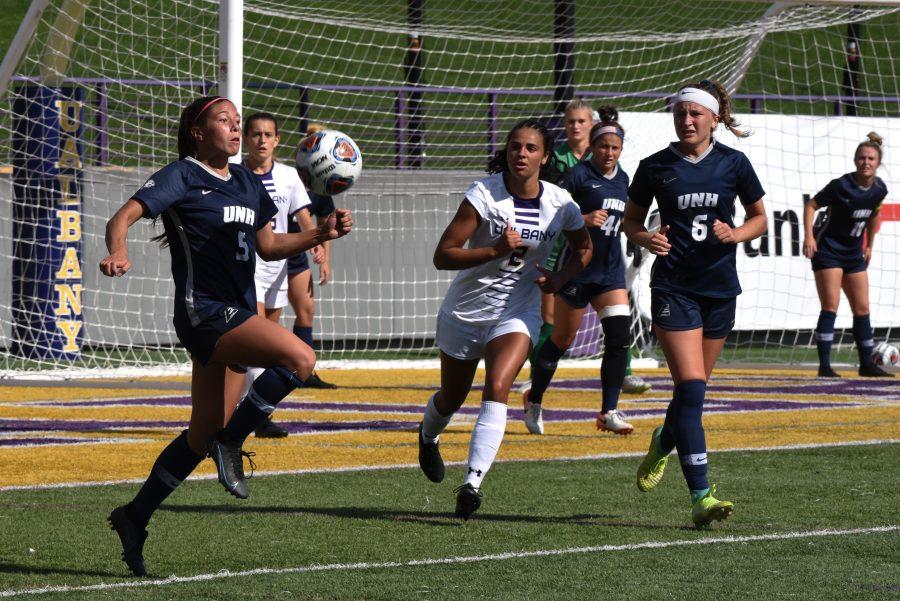 ALBANY, N.Y. — It was a different game, but the same result for the University of New Hampshire’s (UNH) women’s soccer (2-5-2, 0-1-1). The Wildcats staved off a loss with a late goal but once again failed to record a win or more than one goal Sunday against at the University of Albany (1-6-3, 0-1-1) through regulation and two extra periods.

The first 81 minutes saw the Wildcats offense struggle to string anything together. Again. Despite creating some quality chances and registering eight shots, Albany’s first-year goalkeeper Cassandra Coster and their stout defense kept the scoreboard static with the Great Danes ahead thanks to a goal in the first half.

Things looked poised to end with the Wildcats being shut out for the fifth time this season, but finally the dam broke. First-year forward Meghan Guarente booted a corner kick into a sea of blue and white. On impact, the ball bounced off heads, legs and feet before landing at the foot of UNH sophomore forward Keegan Mayer. The second-year player pounced on the chance, took a long stride, and delivered a strike that scorched into Coster’s far post for her first goal of the season.

UNH head coach Steve Welham said Mayer’s goal is emblematic of the determination the team continues to play with.

“What’s so awesome about this young group, is that they don’t give up,” he said. “We adapt.”

The ‘Cats had a chance to avoid extras entirely. Six minutes after Mayer’s tally, first-year forward Abbie Burgess broke through for a one-on-one breakaway with only Coster left. Burgess reeled the ball in just outside the box and ran with it another 15 yards before she unleashed a blast on the net. The breath of the home crowd came to a hitch as the ball darted to Coster’s near post before roaring back to life as the ball doinked off the goalpost and back into play. Coster was able to regain control long enough for a goal kick to send the game into overtime.

The Great Danes got off to a fast start in the first extras period. 20 seconds in, sophomore midfielder Olivia Piraino sidestepped past a UNH defender, dashed from the right side of the field before reaching the center. Piraino pranced 15 yards towards the net before firing a shot towards the far post off her right foot. Like Burgess’s shot, it too drilled off the goalpost to keep the scoreboard locked.

Albany tallied four shots, a pair of free kicks, and a corner in total during the first period of extra time but was turned away with each try.

As the clock trickled backward to zero in the second extra period, little fanfare passed, and it became apparent the match was going to end with a draw.

Nonetheless, the team’s ability to avoid the loss and squeak out a point on the road was something that impressed Welham.

“Obviously we dropped two, but just in the conference, we got a good result Sunday on the road so it’s always good to pick up points on the road,” Welham explained.

After Sunday’s tie, UNH ends their longest road trip of the season with a 1-2-1 record and will head into their next game ranking seventh in the America East.

UNH was unable to come out of the game unscathed, however. Senior forward Julie Cane, who has started all nine games for the ‘Cats went down with an injury following a collision with a UAlbany defender. Cane reached for her ankle immediately and needed help getting off the field from a team trainer.

While scans are still required, the initial diagnosis is that Cane will be sidelined for “a little while” after suffering a high ankle sprain, Welham said.

Stepping up in her stead Sunday was first-year forward Abbie Burgess. Burgess isn’t an unknown commodity for the ‘Cats, having started seven games so far. Welham noted Burgess is an ascending talent for the program that can chip in on both sides of the ball moving forward.

“We can play her behind, we can play her through. We know that she’s hitting her stride and she’s just getting better,” Welham said.

After three weeks away, UNH will arrive back home Thursday, September 30, hosting the UMass Lowell (5-3-1, 2-0-0) Riverhawks.