Another Successful Year for UDay at UNH 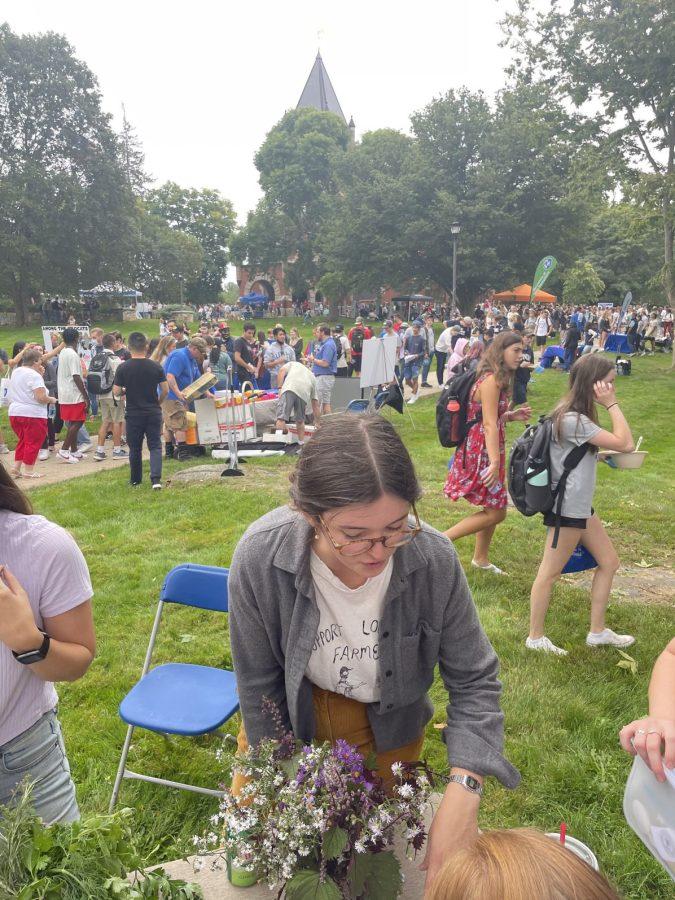 After two cancellations due to rain, the third scheduled date was the charm for the annual University Day (UDay) event at UNH. The event finally happened on Sept. 22 and proved to be a huge success.

UDay is an annual event that takes place on Main Street in Durham, where clubs, student organizations, Fraternity and Sorority Life, academic resources, and many other groups affiliated with the university set up booths and speak with students to increase their membership.

One of the groups that made an appearance on UDay was the club women’s rugby team, whose booth was run by team members Brittney Rosello and Nora Sinno.

“As far as club sports go, I think we probably offer the highest inclusivity. We’ve gotten a lot of different girls [to] come out for the team,” said Rosello. “We welcome everyone. We don’t make cuts, so at the end of the day we’re just one big family.”

“This is the most people I’ve seen in a long time,” said Sinno, referring to the turnout of people attending UDay. “Even compared to the first day of classes.”

They are an action-based church that stands for the LGBTQ community, racial justice, immigration, housing, protecting indigenous members of the community and environmental stewardship that works to combat climate change. “We believe our faith calls us to do this kind of work in the world,” said Forselies. “I’ve been doing this table for probably four years and more students than normal are asking questions about who we are and what we offer, talking a lot about their experiences here,” Forselies said. “We are a church that’s all about asking questions and we believe that we’re here to wonder together and so it’s been really cool to have some students with curiosity who value that kind of dialogue.”

The Community Church of Durham will also have a table at the Portsmouth Pride event on Oct. 9, in Portsmouth, N.H.

UNH offers a wide range of academic resources, such as Career and Professional Success (CaPS), which also held a booth at UDay. “Here at CaPS we really focus on professional development from a very rounded standpoint. So, it’s not just about your resume and cover letter; it’s about who you are, how you present yourself in person, online, in writing, all of those different facets,” said Emma Barresi, career advisor in the College of Health and Human Services (CHHS) and UNH 2020 alumna in communications, who helped run the booth. “We really want to focus on the professional development as a whole, whether that is post grad jobs or going onto grad school; all of those different opportunities that students have after graduation.”

Barresi said that some of the resources that CaPS offers include online resume templates, a verbalist that helps to structure wording for bullet points on resumes, VMock, an online resource for reviewing resumes, and people to help tailor resumes to fit specific jobs or internships that a student is applying for.

CaPS has an industry specific career fair coming up on Oct. 6.

“We’re really trying to put ourselves where you are and meeting you where you’re at,” said Baressi.

First-year students Maddie Wallace and Amanda Stewart expressed their satisfaction with the event. “I personally have never been to something like this before, so I found it really interesting to be able to go talk to a bunch of different people about the clubs,” said Wallace.

“I like how they have such a broad genre, or options, of all the different clubs,” said Stewart. “When you go there, they really engage you.”

Another athletic group that appeared at UDay was the Synchronized Skating Team, whose booth was run by Jessica Kunz, a member of the team.

“We are basically a club team here at UNH. We take anywhere from eight to16 skaters and we go to competitions, and we skate together,” said Kunz.

According to Kunz, the team skates all over the New England region, and has competed in other states like Florida as well. Tryouts are usually held at the beginning of September at the Whittemore Center. “We take as many people as we can get,” said Kunz.

In addition to academic resources, clubs, and student organizations, UNH is committed to the safety of their students through organizations such as the Sexual Harassment and Rape Prevention Program (SHARPP) which also had.

According to Kate Gladstone, prevention specialist at SHARPP, the program offers supportive measures for cases of sexual assault, stalking, sexual harassment, and relationship abuse. “We’re a confidential support resource, so basically we’re a place where you can come and have a one-on-one private meeting and use that time to process an experience you had or learn all about the various options that are open to survivors without having to make a decision in the moment and know that that conversation remains confidential,” said Gladstone.

SHARPP is holding several programs and events in recognition of Domestic Violence Awareness Month in October. One of these events is “Take Back the Night” which happens every year in support of survivors.

SHARPP’s booth at UDay was successful in bringing awareness to their resources. “I’ve had 292 people so far,” Gladstone said, towards the end of the event.

The multitude of diverse organizations, clubs and resources on campus is something that UNH prides itself on, and UDay is a way to celebrate and grow these programs.