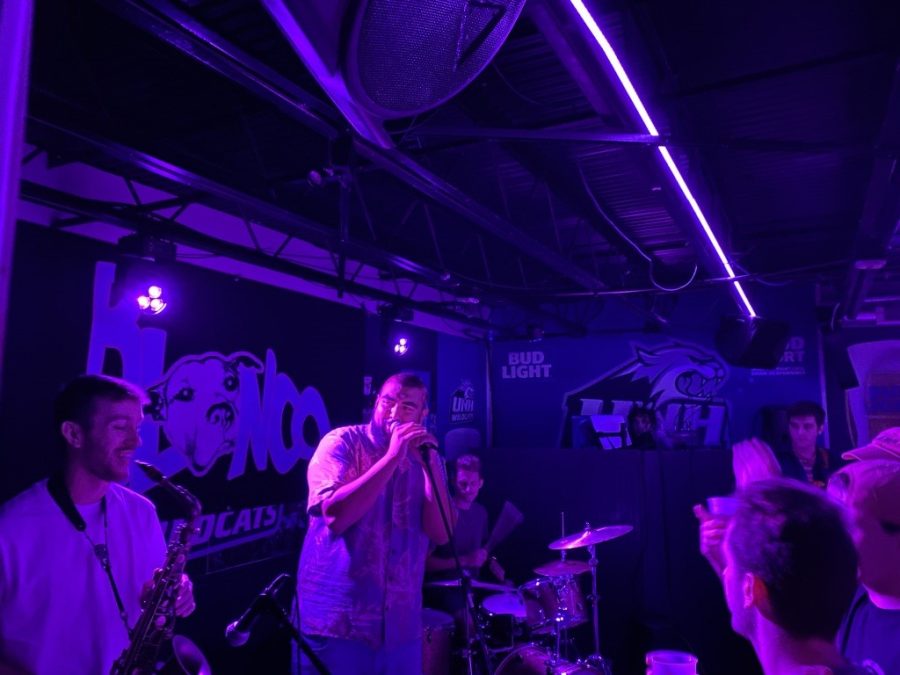 DURHAM—Ryan Farinas and Shane Jozitis met their freshman year at the University of New Hampshire (UNH). They bonded over music and eventually started producing their own songs in Jozitis’s dorm. They loved what they were doing, so they started a band.

“We were a lot less put together back then, we were just doing it for fun,” Farinas said. “I think we kind of got the bug early on.” After a couple of performances at the Freedom Café, they created their band, Blanco.

“As the years went on it got more and more serious,” Farinas said. “We’re at the point now where we have a set group of guys […] and we’re seeing the fruits of the labor start to show a little bit.”

Blanco made their return to the UNH campus Sept. 10 at Libby’s Bar and Grill. The bandmates went their separate ways this summer after their performance at Kookapalooza on July 10 in New Castle. Blanco was excited to see their fans in Durham where they’ve played several times over the last year. Farinas, the lead singer, felt a little nervous for their first show back where Blanco started.

“I was a little worried, wondering if the hype died down at all because we had some momentum going,” Farinas said. The band had performed at Ravi’s Market the night before to prepare for their show at Libby’s Bar and Grill. Farinas saw that the energy was still there from his local fans, making him excited for his next performance. “I’m hoping the same thing happens tonight and we have a nice little welcoming back,” he said.

Farinas hopes to increase Blanco’s listeners on Spotify by performing around the Seacoast, starting with his return to UNH. “Our biggest fanbase is here in Durham, so our goal for this semester is to branch out,” Farinas said. He hopes Blanco makes its way down to Boston to extend their music to a wider audience. Blanco has a solid fanbase on campus, with many familiar faces at their recent show.

UNH graduate student Allie Carulli has been to several Blanco performances on and off campus. She found Blanco through her roommates in fall 2020 and started to go to their performances at The Big Bean in downtown Durham. “I love live music, so I wanted to go see what they were like,” Carulli said. “I listened to some of their songs on Spotify and I loved them even more live.” Blanco’s discography on Spotify has encouraged students to attend their live shows. UNH senior Sydney Cestone started listening to Blanco through Spotify and wanted to see them perform live. “I don’t know what I was expecting, but I was really impressed,” Cestone said. She enjoyed the setlist containing both covers and original songs.

Blanco’s performances include original songs and covers, but they added new songs to the lineup for their most recent performance. New covers such as “Stronger” by Kayne West and “Rock Your Body” by Justin Timberlake excited the crowd at Libby’s Bar and Grill. The audience sang along with Farinas to the songs they recognized from the artists that have influenced Blanco as a band. Farinas found this performance to be a good opportunity to promote songs he had been working on.

“We’re actually going to do two songs tonight that I don’t think anyone’s heard yet that are ready to be released,” Farinas said. Blanco also played their most popular hits such as “I Wanna Die in Hawaii,” “Smilin’,” and “You Get Me So High.”

Blanco’s drummer Shane Jozitis enjoys performing “Even at the Beach It Rains,” an original song written by Farinas. “I think it’s very in our pocket and it just has such a positive vibe about it,” Jozitis said. “I think that’s a song where we all lock in together and we have a great time doing it.”

Carulli believed their performance at Libby’s Bar and Grill was a success. “It was awesome, they did some covers I’ve never heard them play before,” she said. “It was nice to hear some of their new originals as well.”

Cestone also liked the unique selection of covers Blanco performed. “I wasn’t expecting them to whip out Ed Sheeran and Mac Miller, so that was really cool.”

Blanco also performed at the Stone Church Music Club in Newmarket on Sept. 24. They have a few Big Bean shows that are to be announced. Students and residents around the area will have plenty of opportunities to see the band performing live this semester. “I would definitely see them again,” Carulli said. “I would see them every weekend if I could, they’re really good.”