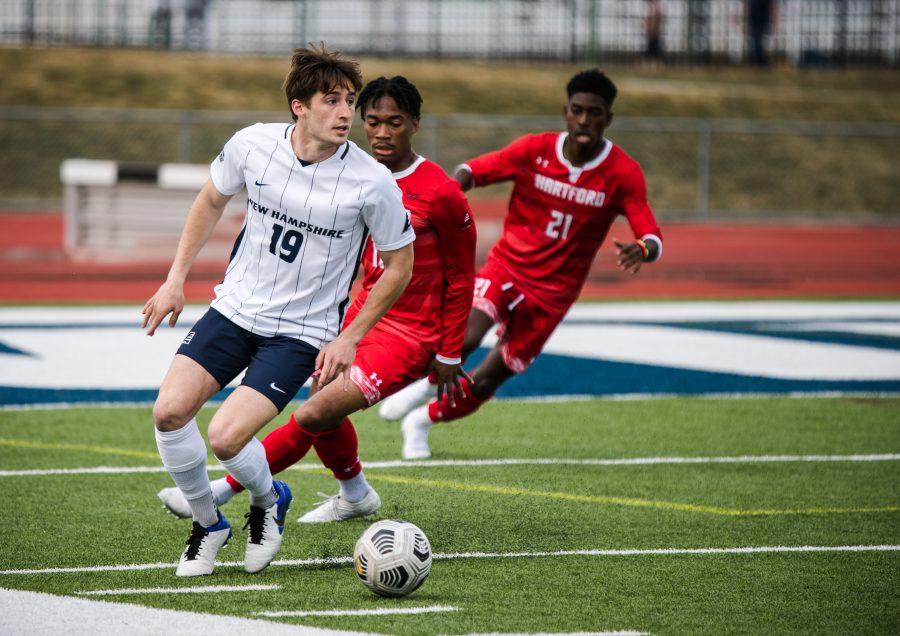 WEST HARTFORD, CONN. — Four straight goals powered No. 9 University of New Hampshire (UNH) men’s soccer (9-0-0, 2-0-0) over the Hartford Hawks (1-6-2, 0-2-0) Saturday night. The Wildcats stayed perfect thanks to a flurry of goals in the second half after falling behind in the first.

UNH had most of the early chances but couldn’t convert. Hartford didn’t seem all that concerned with taking the lead. Their tactics were ultra-defensive, and their forwards rarely had the ball in the attacking third. On one of the few sorties forward, the Hawks won a controversial penalty. In the 32nd minute, junior midfielder Rory O’Driscoll contested across and blocked it with what looked like his torso. The referee saw differently and pointed to the spot, sighting a handball. O’Driscoll was irate with the decision pointing out the red marks the ball had left on his torso.

Both O’Driscoll and his coach were adamant that the call was wrong.

“As their player served the ball in I turned, and I guess my elbow comes out from my body a little, which is where the ref must’ve thought the ball hit,” explained O’Driscoll, “But [the ball] actually caught me in the side of the body as I was turning. Even if it had caught my elbow, I don’t think it was outside of the frame of my body enough to warrant a penalty.”

Despite UNH junior goalkeeper Jassem Koleilat guessing right on the direction of Hartford’s penalty kick, the junior just couldn’t get enough of his glove on it to keep the score knotted at zero.

UNH poured forward in response to the goal. Chances came for the remainder of the first half. The Wildcats continued to chip away, but the equalizer evaded them. UNH ended the half with seven shots but only one on target.

The halftime score of 1-0 had many in the crowd on upset watch. The ‘Cats seem to take offense to the scoreboard to that point. The pressure from UNH finally cracked the Hawks’ defense in the 52nd minute. The Wildcats’ attack pounced on Hartford, and graduate student Jacob Gould swooped in on a ricocheting ball in the box and flicked it into the Hartford goal.

After the equalizer, the ‘Cats smelled blood and pushed their numbers forward. Graduate student Linus Fallberg had options to pick from and curled in a ball to graduate student Bridger Hansen who was waiting in the box. The Utah native struck Fallberg’s ball just enough to curl inside the far post of the Hawks’ goal in the 53rd minute. The goal was the All-American defender’s first goal as a Wildcat and gave UNH a lead they would never relinquish.

Just three minutes later, the ball was in the back of the net again. Fallberg was once again on the service end of the goal. He received the ball in the box after a signature long throw-in from senior Chris Pinkham and volleyed a pass to senior forward Tola Showunmi.  The striker controlled the ball with a deft first touch and blasted a half volley into the far corner’s side netting.

UNH showed a killer instinct that will serve them well this season if they replicate it down the road. The ‘Cats flipped the game in a matter of minutes and left the Hawks reeling. UNH had already delivered the killing blow, but junior Bilal Kamal made sure the Wildcats’ prey was subdued in the 64th minute. He dribbled through the Hawks’ defense and squeezed a shot between the Hartford keeper’s legs from an impossibly tight angle.

At 4-1, the damage was done, and Hubbard took his foot off the gas in the 73rd minute, substituting five of his stars off the pitch. A mixture of everyday players and fresh faces were left to see out the win.

After the game, Hubbard said he was never worried after going down at the half. Hubbard pointed out the creation UNH showed in the first half and said it was just a matter of sticking with what was working.

“It’s nice to know that we can finish some chances in a variety of ways,” said Hubbard.

Hubbard was complimentary of his whole team, including Pinkham, who had a tremendous outing for the Wildcats despite not being on the scoresheet.

“[Pinkham’s] a very consistent, very industrious, physical player he can cover ground and he battles. I think he’s a versatile player for us who has played in a lot of different spots, so a good solid performance for him for sure.”

Pinkham and the rest of the ‘Cats will look to turn in another solid performance against Harvard Tuesday at 6 p.m. at Wildcat Stadium.