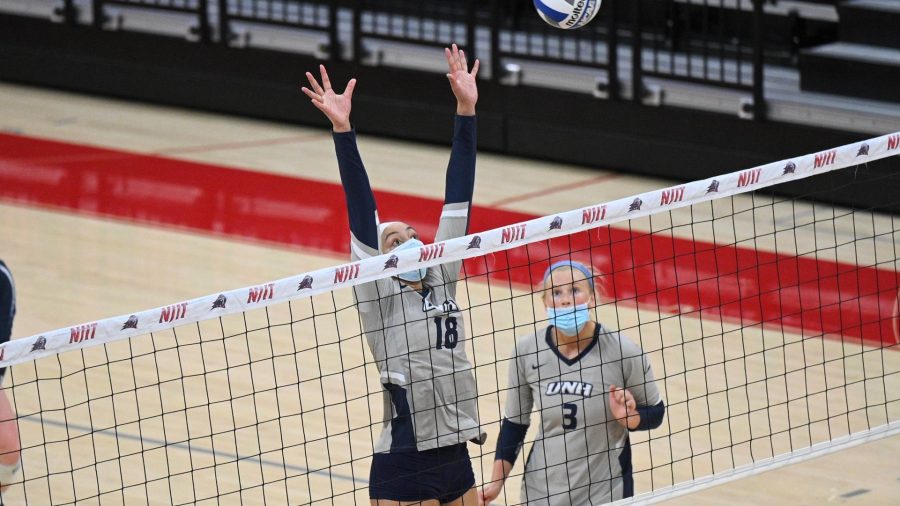 The University of New Hampshire (UNH) Wildcats (7-6) came close to their first tournament win of the season but ultimately fell short in a loss to Rhode Island late Saturday.

The ‘Cats faced off against Morgan State (2-12) in the second game of the tournament. It was another clean sweep for New Hampshire (25-22, 25-18, 25-20). Junior outside hitter Erin Hedrick led the team with seven kills. Sullivan and Kaufmann had another strong showing putting up six kills, while Macaulay led the team in assists with 20 and nine digs.

In the final game of the tournament the ‘Cats fell to the Rhode Island (URI) Rams (8-7) in four sets (20-25, 25-23, 9-25, 21-25). The third set of the match was the worst loss of the season for New Hampshire as their kill percentage was just 4%. URI had more kills, aces, assists and digs on the day. Sullivan and Kaufmann put up 12 kills in the loss while Macaulay notched 39 assists. Pagliarini led the charge defensively making 21 digs.

Head coach Christopher Feliciano said after the game, “while we didn’t play our best match today, we still battled.”

After the Dartmouth Tournament, Macaulay made it clear she wanted to involve her middles more.

“I’ve been doing my best to always try to push middles… it’s my favorite set because one it’s so close to you and it’s such a quick set that the other team has such a hard time defending,” explained Macaulay.

Sullivan led the team with 26 kills this tournament. Macaulay believes that if this team uses their middles more, they will open up opposing defenses and will find long-term success.

Following two tournament wins, the Wildcats improved to 7-6 and remain in first place in the America East. They are the only team in the conference that has a winning record. This is encouraging news for a team that has in-conference opponents in twelve of the next fourteen games to close their season. The Wildcats are yet to beat a team that has a winning record this year. They are 7-1 against teams who are under .500 and 0-5 against teams above that mark.

The Wildcats are back in action on Sunday from the Lundholm Gymnasium for their first in-conference game of the season against Hartford (2-11) at 1 p.m.